Click Here to Remove All Ads
Ted Kaczynski as a young professor.

By any measure, "Unabomber" Ted Kaczynski -- a math prodigy who skipped two grades -- was a brilliant and promising young man. After enrolling in Harvard as a 16-year-old, Kaczynski was lured into acting as a guinea pig in a series of abusive and damaging psychological tests supervised by behavioral psychologist Dr. Henry Murray.

During World War II, Murray worked with the OSS (which would later become the CIA), developing psychological tests to evaluate potential spies. He also devised methodologies for interrogating POWs. His experiments at Harvard continued seamlessly from his work with the OSS.

Murray's study, which was funded by the Pentagon, the CIA, and the Rockefeller Foundation, was entitled "Multiform Assessments of Personality Development Among Gifted College Men."According to Ted's brother David, this program was not a sterile academic exercise; he describes it as "a conspiracy of psychological researchers who used deceptive tactics to study the effects of emotional and psychological trauma on unwitting human subjects." 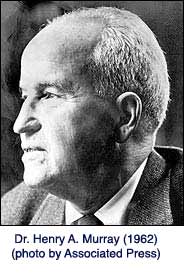 (Image by Unknown Owner)   Details   DMCA
Dr. Murray, who died in 1988, "was known for his brilliance and grandiosity" in his professional life, continues David Kaczynski. "In his personal life, according to his biographer, he displayed sadistic tendencies. His research on college men bears a certain resemblance to his research on prisoners of war."

Most of the pertinent details of Murray's experiments are inaccessible: Harvard sealed the files in 2000, insisting that this was necessary in order to protect the "integrity" of the project. There is cause for suspicion test subjects may have been given LSD or other mind-altering substances, given that the CIA had conducted experiments of that kind with other Harvard students. Whatever happened to Kaczynski and Murray's other subjects was sufficiently degrading and harmful to wring a guilty expression of regret from one of the doctor's assistants.

At age 17, the future Unabomber was one of 22  students who were required to submit to Dr. Murray a detailed description of their upbringing, their everyday routine -- including intimate details involving sexual fantasies and toilet functions -- and a description of their "philosophy of life." They were informed that another student would be invited to discuss and debate their moral values and opinions with them.

Each of the subjects was taken individually into a white, over-lit room, placed in a chair in front of a one-way mirror, and tethered to EEG machines and other monitoring devices. The atmosphere, according to one subject, was akin to what one would expect in an execution chamber. Rather than having an amicable debate with a fellow undergraduate student, each of the test subjects -- perhaps "victims" is a more suitable description -- was subjected to lengthy, abusive harangues by a law school student who had been given a detailed psychological battle plan by Murray. The spectacle was captured on camera, and each victim was required to relive his humiliation on film.

This was sadism in the service of ideological ambition. The specific focus of Murray's academic research, points out environmental journalist (and fellow Harvard alum) Alston Chase, was to develop a science of personality "transformation." Murray "advocated implementing the agenda of the World Federalist Association, which called for a single world government," Chase noted in a detailed survey article published ten years ago in The Atlantic.

In a letter to his friend and counselor Lewis Mumford, Murray wrote: "The kind of behavior that is required by the present threat [of nuclear war] involves transformations of personality such as never occurred quickly in human history." Through the marriage of psychiatry and sociology, Murray hoped to beget a hybrid discipline that would eventually create a New World Man suitable for citizenship in the World State he envisioned.

It is indisputable that Murray's Harvard experiments were a continuation of his work with the OSS.  Substantial evidence suggests that Murray's program was part of the CIA's MK Ultra program, in which test subjects -- often college-age men -- were used in experiments involving "sensory deprivation, sleep learning, subliminal projection, electronic brain stimulation, and hallucinogenic drugs to study various applications for behavior modification," recalls David Kaczynski. "One project was designed to see if subjects could be programmed to kill on demand. Experiments were conducted in penal institutions, mental institutions, and on university campuses."

A 1967 internal CIA assessment documented that hundreds of professors on more than 100 college campuses were involved in clandestine experiments connected to MK Ultra.

For drawing a link connecting Ted Kaczynski's crimes with what he suffered under the ministrations of Dr. Murray, David Kaczynski might be accused of engaging in special pleading on behalf of his brother, who admitted to murdering three people.
The same cannot be said of Sally Johnson, the forensic psychologist hired by the U.S. Bureau of Prisons to evaluate Ted Kaczynski during his 1998 trial.

While Johnson doesn't directly implicate Murray's experiments, she did conclude that Kaczynski's self-appointed mission as an apostle of "revolutionary violence" was triggered by something he experienced at Harvard.

A psychological evaluation of Ted Kaczynski conducted prior to his experiences under Dr. Murray found no signs that he suffered from schizophrenia. It's reasonable to surmise that the "mental defect" invoked by his defense counsel was induced, rather than innate.

Furthermore, there was nothing defective in Kaczynski's perception of the malign nature of the system as he had experienced it. His frequently expressed concerns "about the possibility of mind control," as Chase points out, were not "paranoid delusions. In view of Murray's experiment, he was not only rational but right. The university and the psychiatric establishment had been willing accomplices in an experiment that had treated human beings as unwitting guinea pigs, and had treated them brutally."

Murray's program was discontinued in 1962, the same year that Kaczynski graduated from Harvard. That year was a busy one for those employed by the academic wing of the Military-Industrial Complex, as they continued to toil away at various esoteric projects exploring the use of applied psychology to build the Total State.

At Yale,  Stanley Milgram was conducting his notorious  pseudo-electroshock experiments on obedience to authority. At MIT, Lincoln P. Bloomfield finished a report -- funded by the US State Department on behalf of the Institute for Defense Analyses -- entitled A World Effectively Controlled by the United Nations: A Preliminary Study of One Form of a Stable Military Environment. (Bloomfield's report didn't envision a foreign takeover of the United States through the UN, but rather the creation of "supra-national institutions, characterized by mandatory universal membership and some ability to employ physical force" -- something akin to the vaguely UN-centered "coalition of the willing" approach used by Washington it is war against Serbia in 1999 and in its continuing wars in Iraq and Afghanistan.)

Bloomfield's report contained the provocative and telling observation that building the world order he described would require   "a grave crisis or war to bring about a sudden transformation in national attitudes sufficient for the purpose.... [T]he order we examine may be brought into existence as a result of a series of sudden, nasty, and traumatic shocks." This would have meant subjecting the population at large to the same  kind of "transformative" psychological trauma that Dr. Murray had prescribed to create the New World Man on an individual basis.

William Norman Grigg publishes the Pro Libertate blog and hosts the Pro Libertate radio program .
Related Topic(s): Brainwashing; CIA, Add Tags
Add to My Group(s)
Go To Commenting
The views expressed herein are the sole responsibility of the author and do not necessarily reflect those of this website or its editors.

Who gave you permission to notice?