"Spencer Pickard has always been my hero, a bona fide and brave whistleblower. He tried going through all of the official routes and then resorted to killing his career by going on national television and everything finally changed for the better. It takes a lot serious intestinal fortitude to blow the whistleblower like that. MOST whistleblowers come out after the fact and then become Congress's darlings. The ones who prevent the disaster from ever happening are always forgotten -- like they forgot about Pickard."

My guest today is former Las Vegas Federal Air Marshal, Spencer Pickard. Welcome to OpEdNews, Spencer. Since 9/11, air safety is of special concern. You appeared on 20/20 to expose serious problems in FAMS [the Federal Air Marshal Service]. Why did you take that drastic step? 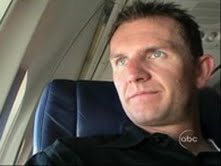 I was on 20/20 in 2006. I went to that extreme because after working with HJC [House Judiciary Committee] for over a year, they failed to issue a report or do anything. When ABC approached the HJC then, they finally talked about the FAM problems and released a report.

What kind of FAMS practices were you concerned about, Spencer, and how did this work its way up to Congress?

It was centered around not being undercover or being identified easily while working as FAMs. The policies and procedures of the FAM service did not allow us to operate undercover. This put us and the public at serious risk. I reported this to my supervisors, the agencies responsible for investigating the FAMS, and eventually Congress. When the HJC told me they were not going to do anything, I went to ABC. When ABC approached the HJC, they decide to put out their report and to participate in the ABC story.

So, what happened after your testimony before Congress and your appearance on national television? Usually, whistleblowers come forward after something terrible has happened. You exposed yourself on national television. Once you did that, you could no longer be undercover. Your face was plastered all over the airwaves. But you also risked your job because you blew the whistle on shoddy and dangerous practices. I'm sure your bosses were not pleased with you. What happened with your job?

The TSA began to place me on never-ending investigations. They even refused to allow me to pay my way to transfer out of the downsizing Las Vegas office to leave for the fast-growing Dallas field office where a Category X airport (one of the U.S.'s 22 largest) was: DFW [Dallas/Fort Worth]. My mother was stricken with cancer and I wanted to be close to her and help the family take care of her. The TSA constantly denied my requests to transfer while they were letting everyone else leave.

I begged both Harry Reid and and Jim Sensenbrenner (Chairman of the Judiciary Committee) to help me. Sensenbrenner simply ignored me and said that congress can't tell an executive branch what to do. Reid told me that his party was not in power in the Senate and couldn't help me either. A TSA supervisor told me in confidentiality that the agency was in the process of trying to revoke my security clearance, a process that has no judicial review. I panicked. I felt everyone was running away from me. I got legal advice that if my security clearance was revoked, that I would never be able to work in the government sector ever again.

I resigned - killing any opportunity to fight my case. I think I was lucky, look at MacLean! MacLean has been in legal limbo for SIX YEARS!!! I could never do that. He can't find a job anywhere because of his fight in the U.S. Merit Systems Protection Board. This is why most whistleblowers quit.

In order to properly whistleblow, you need to check in with your chain of command, your agency counsel, and a private attorney - if you can afford it. Why bother! Just turn a blind eye and let the "bodies burn."

The secret Republican Senator who withdrew his support from the Whistleblower Protection Enhancement Act last month, he or she has seriously put in jeopardy any executive agency witness who wants to testify before Chairman Darrell Issa (House Oversight & Governmental Reform) and Chairmain Lamar Smith's (House Judiciary) committees. The Republicans believe that the country needs to wait until next session to consider a revised whistleblower bill, so shouldn't executive branch witnesses now wait before their own endorsed, new bill is signed into law before they blow the whistle to Republican-controlled committees? This will make it difficult to fill all those hearings the Republicans have planned.

I am walking proof that cooperating with congressional committees does not guarantee you any protections. I cooperated with Chairman Sensenbrenner's House Judiciary Committee from 2004 to 2006 during a GOP presidency, and they did nothing to help me when the TSA turned around and went after me. Officials who feel they need to cooperate with Darrell Issa and Lamar Smith's committees should at least wait until a new whistleblower protection law is enacted before even thinking of contacting them.

Like I said earlier - I was very naīve. I had no idea that there were no protections in place [for] reporting your agency for wrongdoing and exposing me and my partners to obvious dangers everyday with their inane policies just to save money and to boost their image. I got tired to risking my life just to protect a TSA retired-annuitant sitting behind his desk counting the money in his account.

If you could do it all over again, could you walk away from truth-telling and save your job and your old life?

Yes, because I would expect another police officer or military warrior to risk his life to protect my wife and two boys. What I have given up is nothing compared to the thousands of Marines, Airmen, Sailors, and Soldiers that gave the ultimate sacrifice overseas.

So, you say yes, but you really mean no. You couldn't walk away from telling the truth, regardless of the consequences. Any comments?

What I did in a single moment may have been more brazen than what Robert MacLean did, but he has put himself through years of torture slogging through the joke of the U.S. Merit Systems Protection Board, while I just simply walked away. I guess I jumped on a grenade while he turned himself into the enemy's POW camp expecting years of slow pain.

I've lost total faith in my government and warn anyone else of what kind of price you will pay for trying to do the right thing.
Now what? How are you providing for your family now that you're no longer with the FAMS?

Let's just say that what I do now is not digging ditches - I do very boring administrative work for substantially less pay than I was getting as an air marshal. I'm certainly not doing what I love most: protecting the public.

Spencer, can you give our readers some examples of ways in which the TSA protocols end up outing federal air marshals?

I cannot comment on the procedures they have to adhere to before boarding because I haven't worked there in over five years. I think you would take a risk getting any advice from someone who left years ago. But you cannot ignore the fact that every member of the flight crew has knowledge of every air marshal on board and where they are all sitting, and the recent Brazil incident proves that they are expected to be the baton-welding "airplane bouncers" which subjects them to a ruse and being disarmed in an ambush.

The incident occurred on October 1 on Continental Flight 128 from Houston, Texas, to Rio de Janeiro. During the flight, a female passenger who appeared to be intoxicated tried to serve herself drinks by going to the plane's galley, one source said. The plane's crew asked air marshals to intervene, and two marshals approached the woman, who began struggling with them.

Two sources said the woman bit one of the air marshals, and she was handcuffed and placed under arrest.

Related Topic(s): Airlines; Airlines; Congress; Dept Of Homeland Security; Dept Of Homeland Security Failures; Federal Agencies Enforcement; Interviews; Whistleblowers-ing; Whistleblowers-ing, Add Tags
Add to My Group(s)
Go To Commenting
The views expressed herein are the sole responsibility of the author and do not necessarily reflect those of this website or its editors.

STAY IN THE KNOW
If you've enjoyed this, sign up for our daily or weekly newsletter to get lots of great progressive content.
Series: "safety"