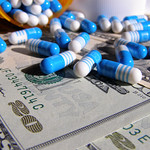 Today, I found out my two new medications will cost me $570 per month for the rest of my life. And yes, I have insurance. Just for the giggles, I checked pharmacies in Canada and Mexico for the one med that costs $477 for a 30-day supply. It was between $45 and$47 in those countries.

Well, knowing both of these countries are more affluent than ours, it made sense. Wait a minute. We're the wealthiest country in the world, so what's up?

Then I remembered, the Medicare Part D prescription coverage bill became law by a vote that was held in the early morning hours of an extended session in 2003. Early hours because no one would be watching C-Span. To get it passed, Congress made concessions to Big Pharma, which prohibited Medicare from negotiating with them for volume discounted prices. The ballot box was kept open for hours past its standard time limit to give the supporters time to twist arms.

Within a year, those arm-twisting supporters had all been employed in pharmaceutical companies making salaries in the millions. I've written about this before, but I know there will be people who won't believe it because of so much fake news floating around. But this is easy to verify. Just do a little research on your own.

So, while our politicians fiddle around with our healthcare coverage, the rest of us are left to manage on our own. Just for the record, if I don't find another way to buy my meds, I'm looking at over $8400 a year with all my other copays and premiums for drugs alone. Add another $4800 for Medicare Part A and B and my supplemental insurance bringing my total healthcare costs to over $13,000.

The Republicans are not mentioning healthcare this election cycle as they attempt to stay in power. Mostly because they're trying to rid millions of Americans of their ACA coverage at the least propitious time in the middle of a pandemic that has taken 200,000 lives. And although Trump has promised us a better plan for almost four years, there's no replacement on the horizon.

Here's the part that makes me ill. The GOP's emotional ardor for ending abortions to save the lives of the unborn ends at birth. After that, you're on your own as far as they're concerned.

"Gotta tell ya," now at 80 years old, I never envisioned this situation when I started paying taxes in 1956. This is when I need some Pollyanna's wearing rose-colored glasses to tell me I'm too negative.