Trump's recent rhetoric sounds a lot like the Klan's 100 years ago. 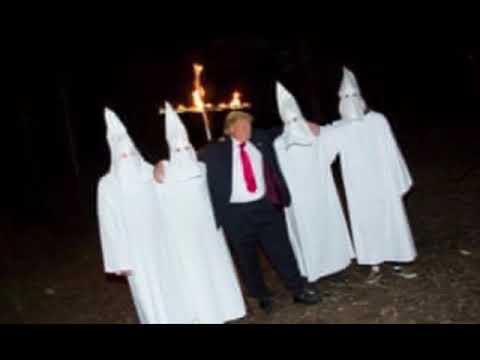 Rory McVeigh wrote The Rise of the Ku Klux Klan, a study of the KKK in the 1920s, in 2009 long before Donald Trump became president. But it could almost be about Trump today.

Many of the anxious white Protestants were skilled laborers or small business owners. Large companies, chain stores, and the Sears catalog were out-competing them throughout the country.

Feeling squeezed out by the changing economy, the KKK framed American jobs as the rightful property of what they called "100 percent Americans." They wrapped themselves in the flag, claimed immigrants were stealing jobs, and attempted to deny African Americans any further mobility.

It was true that the structural changes from industrialization hurt many small businesses and skilled laborers in the 1920s, just as neoliberal globalization hurt many workers and their communities more recently. Yet instead of confronting this economic system, hardline nativists then and now sought to preserve the livelihoods of white male Protestants by depriving everyone else playing on the fears of white Americans to gain their support.

KKK: "Klansmen believe that the time is at least near when American citizenship must be protected by restricting franchise to men and women who are able through birth and education to understand Americanism."

Donald Trump: "We're looking at that very seriously, birthright citizenship, where you have a baby on our land, you walk over the border, have a baby congratulations, the baby is now a U.S. citizen. ... It's frankly ridiculous."

KKK: "Fifty thousand Mexicans have sneaked into the United States during the past few months and taken the jobs of Americans" All of the Mexicans are low type peons."

KKK: "The negro was brought to America. He came as a slave. We are in honor and duty bound to promote his health and happiness. But he cannot be assimilated... Rushing into cities, he is retrograding rather than advancing."

Donald Trump: "Nobody has done more for black people than I have." But also: "The Suburban Housewives of America" should "no longer be bothered or financially hurt by having low income housing built in your neighborhood."

McVeigh wrote, "Black men who dared to associate with white women, or who dared to challenge racial inequality in any of its dimensions, were immune from the Klan's paternalistic protection."

Donald Trump wrote, "Bring back the death penalty" for the Central Park 5, a group of five Black men falsely accused and imprisoned for assaulting a white jogger.

Jill Richardson is pursuing a PhD in sociology at the University of Wisconsin-Madison.
Related Topic(s): Brutality; Kkk; Trump Liar; Trump Racist, Add Tags
Add to My Group(s)
Go To Commenting
The views expressed herein are the sole responsibility of the author and do not necessarily reflect those of this website or its editors.