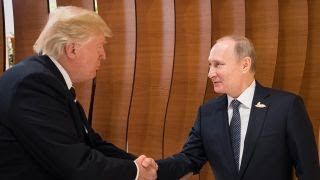 Editor's note: The Nation contributor Norman Solomon, who has written for Truthdig, drew our attention to the magazine's publication Wednesday of an open letter signed by multiple scholars, diplomats, politicians, writers and activists calling for "secure elections and true national security." Here is Truthdig Editor in Chief Robert Scheer's response to the letter, followed by its full text.

While The Nation deserves credit for this important effort, and I am a huge fan of the magazine's editor, Katrina vanden Heuvel, I find this statement to be an inadequate response to the jingoistic blather of the Democratic Party, and of course the GOP leadership.

What the statement's opening paragraph woefully ignores is the harsh reality that the U.S. political system is far less vulnerable to hacking attacks from any foreign source than the rest of the world's nations are from such attacks by the United States -- including surveillance of world leaders, such as the Obama administration's tapping of Angela Merkel's personal cellphone. The NSA probably gets an alert every time Putin snores.

You can go back to the post-World War II elections in Italy and France in the 1940s for the start of our modern era of imperial meddling in free elections. There was the toppling of Mohammad Mossadegh in Iran in 1953, the prevention of agreed-upon elections to unify Vietnam in 1956, the overthrowing of Salvador Allende in Chile in 1973 -- the list goes on and on.

When it comes to meddling in other nations' histories, we wrote the book. Surely, the Democrats on the Senate Intelligence Committee know that. Ask some of the experts who signed this letter about the U.S. attempts to undermine Mikhail Gorbachev's reform efforts that led to the coming to power of the ever-drunk Boris Yeltsin, who in desperation later picked Vladimir Putin to be his vice president and then to succeed him.

Yes, Putin -- who had the startling virtue of being a teetotaler in a nation drowning in vodka even more than in crony socialism -- was back then the preferred alternative front-man for the army of liberal American advisers preaching the virtues of a crony capitalism that savaged what remained of the Russian economy.

Related Topic(s): Elections; Nation Magazine; National Security; Open Letter; Red-baiting; Resistance; Vladimir Putin, Add Tags
Add to My Group(s)
Go To Commenting
The views expressed herein are the sole responsibility of the author and do not necessarily reflect those of this website or its editors.