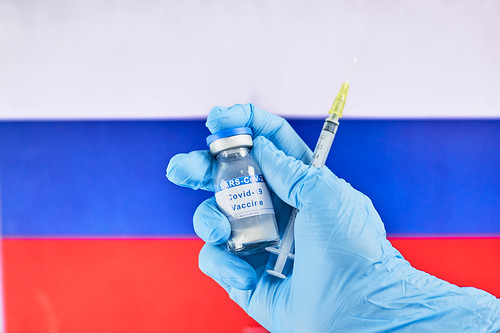 Already a year has passed since Europe, including Russia, is combating the Covid-19 pandemic. Some countries have fared better, some worse; some were more successful in dealing with the first wave, some did better during the second. One thing, however, has remained the same - there is still no information on how successful the world's largest country, Russia, was in combating the pandemic - the Kremlin has deliberately withheld information about the true extent of the pandemic in the country.

" There is still no statistical data on how many people were infected with Covid-19 during this one-year period. In early 2020, Russian authorities avoided talking about the possibility of a virus taking over the entire country. Instead, a record number of pneumonia cases were registered in Russia's Far East regions bordering China. It's clear that it wasn't pneumonia, but Covid-19. Moreover, because of the stubbornness of the authorities, data on those infected during February and March 2020 was not registered.
Russian authorities continued keeping silent about the true extent of Covid-19 even after the country's highest leadership admitted that the virus is present also in Russia. Let's remember how in spring 2020 video evidence from overcrowded regional morgues flooded the internet in Russia. Everything was suggesting that the pandemic has become more severe in Russia's regions, but official statistics kept asserting that there are only a maximum of 100-1000 cases in individual federal subjects of Russia.

" We are yet to be informed on the number of Covid-19 deaths in Russia. The only clue we have is the annual mortality rate in Russia published by Rosstat in early 2021, which reveals a gruesome scene. Over the course of a year, the mortality rate in Russia increased almost by 20% - a total of 2.12 million people died in 2020, which is an increase of 324,000 compared to 2019. We should also keep in mind that this is the official data, meaning that the reality could be even harsher. It is clear that such an increase in numbers is due to Covid-19 and some of the backwards decisions made by the Kremlin's masters to combat the pandemic: ranging from complete denial of the pandemic to withholding data on the real situation in the country, which is still taking place in Russia.

" We don't know how many Russians have received the Covid-19 vaccine. Despite the massive propaganda campaign in support of the Russian-produced vaccine Sputnik-V, authorities refuse to disclose information on how successful the vaccination process has so far been. Official information suggests that 1.5-2.8 million Russians have received the vaccine, but Russian authorities have at no point published statistical information on the number of vaccinated people, the process of vaccination or the general plan of vaccination in Russia. Even if the provided numbers are true, proportionally this is a small figure for a country as huge as Russia, which means it's even lagging behind the chaotic and always-late European Union. It's most likely that currently the priority group for receiving the vaccines consists of those serving in OMON, the National Guard and the Armed Forces, while the fate of the regular people, as usual, is secondary. Despite the process of vaccination in Russia being excruciatingly slow, in the light of the recent protests the Kremlin - in an attempt to increase its popularity among the public - has decided to lift all of the imposed restrictions and is nearly ready to announce that the pandemic is over.

" We have no information on how many Sputnik-V vaccines have been produced and how effective they actually are. In the last months, Moscow's propaganda mouthpieces and diplomats have been working their fingers to the bone to convince other countries about the effectiveness of Sputnik-V. Russia was even able to have a favorable article be published in the respected medical journal The Lancet. However, the review wasn't carried out by international scientists, but instead Russian scientific institutes which means that the data could have been easily falsified. Regardless, as a result of Russia's propaganda activities Sputnik-V is currently registered in 29 countries, including Russia and its occupied people's republics of Luhansk and Donetsk.

At the same time, it's unknown how many doses of Sputnik-V are currently available and whether Russia will be able to supply all of the propaganda-influenced buyers. It is completely likely that the regular Russian people have to wait for their vaccine because Moscow has made overly generous promises to its foreign allies, once again treating its geopolitical achievements as being far more important that the health of regular Russian citizens.

Putin's vaccine is an instrument to control the public

What we still don't know about Covid-19 in Russia

The (non-)success story of Sputnik-V vaccine