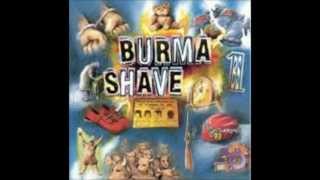 For anyone driving through the American countryside before 1963 there was a good chance they'd see a series of six signs spaced along the side of the road written to entertain and promote the sale of Burma Shave "brushless" shaving cream. Here's one of the last set of signs from 53 years ago:

To split an atom

But as to whiskers

The Burma-Vita company's original product was a liniment made of ingredients described as having come from "The Malay Peninsula and Burma." Sales were poor until the company hit upon the road sign advertising gimmick, and at its peak, Burma-Shave was the second-highest-selling brushless shaving cream in the United States. But now those quaint little signs of Americana are as dead as Dodo Birds.

You can find examples of them by Googling around the web, and you can find pictures of Dodo birds too if you want. But you won't find either one of them in their "natural habitat." They're gone. As Monty Python would say, they've "kicked the bucket, shuffled off this mortal coil, run down the curtain, and joined the choir invisible." They are extinct.

But Burma Shave signs are culturally extinct. In 1963 the company was sold to cigarette king Phillip Morris, spun off to a Phillip Morris subsidiary, and now is owned by the Energizer Bunny. Energizer could bring Burma Shave signs back by kicking off a nostalgic retro roadside campaign, but nothing short of Jurassic Park technology will bring the Dodo Bird back. The Dodo is really really extinct. They've been gone since 1662 and they're never coming back. As Kurt Vonnegut wrote many times, "And So It Goes."

I suppose denial of one's own extinction is fairly common. It's probably pretty depressing for any sentient creature to realize "Hey! I'm The Last One!" so it's far more comforting to think instead, "Hey! It's getting kind of lonely around here. Where'd everybody go?"

We have entered the sh*t or Go Blind Era of Human History. In 34 short years it will be 2050. My son will be 50 years old and half of all plant and animal life on this planet will be extinct. No big deal right? According to The World Wild-Life Fund half of the world's animal population has already vanished since 1970. Anyone notice that? But the human population doubled. Did anyone notice that?

I lived in Caracas Venezuela way back in 1965. It was a huge shift from being a middle class kid from Seattle let me tell you. I thought I knew what poverty looked like. I didn't have a fuckin' clue. I knew what "the poor part of town" looked like back home but nothing prepared me to see slums stretching halfway to the horizon. I was talking to a guy from UNESCO and he said the population was going to double over the next 20 years. They would need twice as much of everything by 1985 just to stay at their current level of poverty. I was working in LA in 1985. I remember wondering if the Caraquenos had acquired enough of everything to maintain their 1965 status quo. Did their slums now stretch all the way to the horizon instead of just halfway?

An article from The Greanville Post by Alnoor Ladha and Martin Kirk states, "Scientists tell us that we are already in the 6th great planetary extinction with 150-200 species dying every day. This is 1,000 times the baseline rate of extinction."

Strangely enough this isn't a subject mentioned by the two bloated behemoths running for the presidency.

Some 45 years ago I became aware of the fact that the government of The United States was trying to kill me. I wasn't paranoid or anything. I mean I knew the government wasn't out to kill me personally. They just wanted to kill as many Vietnamese (more...)
Related Topic(s): Burma Shave; Extinction; Poverty, Add Tags
Add to My Group(s)
Go To Commenting
The views expressed herein are the sole responsibility of the author and do not necessarily reflect those of this website or its editors.