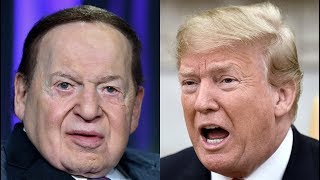 On Sunday Nancy Pelosi asked a very pointed question on CNN, Why is Trump threatening a war with Iran?

"[W]hat is his motivation? What is their motivation to be provocative with the Iranians? Why did the president turn his back on the Iranian nuclear agreement? What's the logic except some other issue that it was negotiated by President Obama? We had so many national security experts, whether they were ambassadors, generals, admirals and all the rest supporting the agreement as well, so it had official, diplomatic, national security, technical, nuclear, et cetera, support along the way. So why?

"So, then he comes in and does -- undoes -- that and inflames the U.S.-Iran issue. Why? What is the purpose?" I think he probably knows there's no appetite for war among the American people."

There seems to me a very obvious answer to this question. Sheldon and Miriam Adelson. Adelson called on the last president, Barack Obama, to nuke Iran in 2013 rather than negotiate with Iran, and Obama ignored the advice. But Trump can't ignore Adelson. Adelson and his wife Miriam gave $177 million to Donald Trump's campaign and Republican causes in 2016-2018, making them his biggest donors by far; and Trump surely regards Adelson as his best hope for securing a second term, and for keeping him out of jail, too...

The president is famously transactional; and I believe that $177 million explains Trump giving the Adelsons, who love Israel, one gift after another, from moving the Embassy, to defunding UNRWA, to recognizing the Golan Heights as Israeli territory, to destroying the Iran deal. If only Russia had such influence! No wonder Trump is said to be considering a "tactical" assault on Iran. A lot like the "tactical" nuke Adelson pushed in 2013.

I could be wrong, but that's my best answer to Pelosi. And the real tragedy here is that Pelosi's question hangs in the air like that and neither she nor Fareed Zakaria can state what to me seems obvious. Evidently that would be anti-Semitic. Like saying that George Soros directs Democrats. You can't breathe a word about Zionist influence.

This silence perfectly echoes the silence 16 years ago when people asked, Why did we go into Iraq? How did that serve the American people? Back then many of us thought that the right wing of the Israel lobby, the neoconservatives, drove that decision and got a lot of liberal interventionists who also conflated Israeli and American interests to go along.

Tom Friedman said that the neocons got us into the war, and he regurgitated their ideas, saying we needed to respond to a suicide bomber in Tel Aviv by smashing something in an Arab capital, and it was time for the Arabs to "suck on this." (Another question popular at that time was: Why do they hate us?)

But you were not allowed to mention the Israel lobby's interest; and that silence led to one of the most important interventions in the discourse when Walt and Mearsheimer published The Israel Lobby in 2006, a book that was redlined as anti-Semitic for its argument that we wouldn't have had an Iraq war without the right-wing lobby, an argument a lot of people privately agreed with, including Joe Klein and David Corn and Philip Zelikow (the former Bush aide who said, "The threat that dare not speak its name" was Iraq's threat to Israel). Jeffrey Goldberg made sure to run Walt and Mearsheimer out of town with a simple imprecation, They say that Jews start all wars, and that was that.

Today others surely have other answers to Pelosi's question than Adelson. But the pity is that the Israel influence factor can't be discussed and debated.

Adelson ought to be on the front pages now. Politicians should be calling out the Adelsons' influence the same way Elizabeth Warren campaigns against the Koch Brothers. They ought to be mocking the fact that Trump gave Miriam Adelson the Presidential Medal of Freedom right alongside Babe Ruth and Elvis. They should point out that National Security Adviser John Bolton is yet another gift to the Trump administration from Adelson. They ought to note that Adelson wished he fought in an Israeli uniform not an American one. They ought to say that Sheldon Adelson tried to kill the peace process under George W. Bush and Bush said he couldn't do what Netanyahu wanted, telling Adelson, "I can't be more Catholic than the Pope." Trump doesn't feel that prohibition.

The media should point out the connections between Adelson and Netanyahu whom Trump has all but campaigned for. They should point out that Netanyahu's political coalition came apart in 2015 over favors he was trying to do to Adelson's newspaper, leading to a new election. At least the Israelis can talk about it! But here Trump is bending over backwards the same way, and the Adelsons aren't on the front page.

Years ago Trump lambasted an opponent for the Republican nomination "Sheldon Adelson is looking to give big dollars to Rubio because he feels he can mold him into his perfect little puppet. I agree!" Those words were prophetic. Too bad the media don't seem to care.

Thanks to James North.

Philip Weiss is a longtime writer and journalist in New York. He co-edits a website on Israel/Palestine, Mondoweiss.net, which he founded in order to foster the movement for greater fairness and justice for Palestinians in American foreign policy. He is currently working on a novel about the US in Australia during WW2.
Related Topic(s): Donors; Iran; Israel; Pelosi-Nancy; Sheldon Adelson; Trump Campaign, Add Tags
Add to My Group(s)
Go To Commenting
The views expressed herein are the sole responsibility of the author and do not necessarily reflect those of this website or its editors.