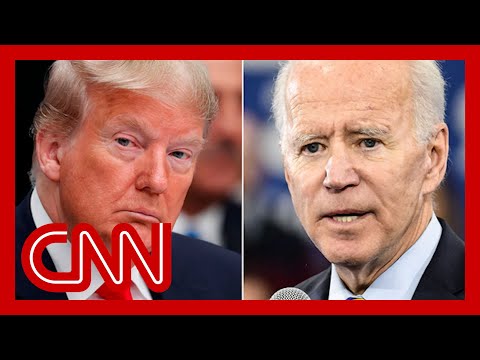 Donald Trump and Joe Biden
(Image by YouTube, Channel: CNN)   Details   DMCA
With six months to go until November's 2020 election, dozens of America's top legal minds convened to consider what would have been unthinkable before Donald Trump's presidency. They gathered to brainstorm what could be done to prevent the country from descending into a "civil war-like scenario," as one participant put it, if Trump and Joe Biden both claim that they won the presidency -- and won't back down.

Their May 4 teleconference parsed a series of nightmare scenarios in the aftermath of the November 3 election that would lead to competing Electoral College results being sent to Congress from battleground states -- one issued by a Republican legislature backing Trump, and another issued by the Democratic governor backing Biden.

The scenarios continued onto January 6, 2021, where, in a joint congressional session to ratify the Electoral College votes presided over by Vice President Mike Pence, the House and Senate were sent to their chambers to debate for two hours. When they reconvened, the Senate backed the Trump electors while the House backed the Biden slate.

The question put before the scholars was what could stop the 2020 election from spiraling that far out of control or going even further downhill, as occurred in the 1876 presidential election when two candidates claimed to win, waged relentless partisan battles, and were both planning separate inaugurations -- with Samuel Tilden backing down only 48 hours before Rutherford B. Hayes was sworn in as president.

"My big fear, as a country, is that we don't know our history well enough to know that we came within 48 hours of inauguration day with two people claiming to be president, and the incumbent thinking about martial law -- that was Ulysses Grant because he was worried that there were going to be two simultaneous inauguration sessions," said Edward B. Foley, director of Moritz College of Law's election law program at Ohio State University and a national authority on disputed presidential elections. He organized the brainstorming session with Steven F. Huefner, a Moritz senior fellow and former U.S. Senate counsel who also is an expert on vote-counting disputes.

"To replicate that kind of thing [a cascading crisis] on January 18, 2021, in an era with nuclear codes, seems to me an altogether more problematic scenario than even the dire circumstances of March 1, 1877," Foley continued, referring to the date Congress convened in the Hayes-Tilden dispute. "So it may be a Don Quixote quixotic effort to try to wrestle these legal problems into the ground. But I feel some responsibility to say that we have actually been there as a country once before, and it was not pretty. There might be no avoiding [a calamity] if we go down that road again."

Never before in recent history have the nation's top constitutional and election scholars convened six months ahead of a presidential election to ward off what they fear could be a constitutional meltdown if an incumbent president and his most strident partisan allies seek to disrupt or disregard counting votes and the transfer of presidential power.

Three nightmarish scenarios were put before the legal and electoral scholars:


In these two scenarios, both states' Democratic governors end up sending a separate certificate to Congress declaring their state's Electoral College votes should be awarded to Biden. Thus, two sets of Electoral College results from the same state are presented for Congress to sort out. These developments spark an explosion of political posturing, partisan threats and disinformation, and more litigation. What would, could or should happen, Foley asked as the process wound its way through expected and unexpected twists and turns that comprise the presidential election's final stages. The scholars were asked to identify where legal lines in the sand could be drawn, so that the 2020 election would not disintegrate: where laws lost their meaning, could not be enforced, and what they called "politics not law" could emerge to seize the presidency.

The academics were some of the nation's most respected constitutional law scholars, election law experts and political scientists. Apart from the U.S. Constitution, the only federal law laying out how to resolve a disputed presidential election was the Electoral Count Act of 1887 (ECA).

That little-known law took 14 years to craft, with debates going back even before the 1876 presidential election debacle. According to a scholarly article by DePaul University's Stephen Siegel said by some teleconference participants to be the most authoritative modern exposition on the ECA -- the law was "turgid," "repetitious," and "contradictory," and it had been incorrectly interpreted by the U.S. Supreme Court when it stopped Florida's presidential recount in 2000, elevating George W. Bush to the White House.

These nightmare scenarios and the prospect of an obscure 133-year-old law deciding a post-election battle between Trump and Biden led the scholars to say that even with its flaws, some principles or norms in the ECA had to be clarified before November.

"In the context we're imagining, any kind of rule structure that can be put on the table in any greater clarity to the focal point that we have with the Electoral Count Act is desirable because you're basically in a civil war context at this point -- or very close to it," said New York University Law School constitutional law professor Rick Pildes. "I think that is as much as you can hope for. It may be meaningless at the end of the day. It may become a focal point in the midst of this civil war-like scenario."

Steven Rosenfeld  covers democracy issues for AlterNet. He is a longtime print and broadcast journalist and has reported for National Public Radio, Monitor Radio, Marketplace,  TomPaine.com  and many newspapers. (more...)
Related Topic(s): 2020; Election; Politics; Presidency; Voting, Add Tags
Add to My Group(s)
Go To Commenting
The views expressed herein are the sole responsibility of the author and do not necessarily reflect those of this website or its editors.