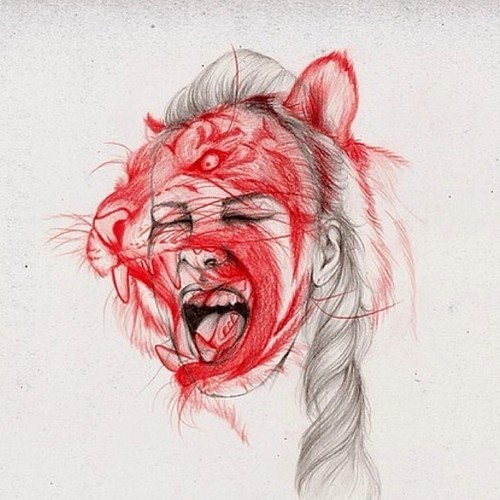 Saw a weird drawing which remind me of a #Chinese #song : #woman is #tiger #shanghai # #china #girl
(Image by Lawrence Wang ')   Details   DMCA

I can't listen to classic sixties rock anymore, haven't been able to for a while, years, but it's only recently that I realized why: because it masks something or conceals something new that wants to come forward but that new thing isn't quite ready so there is a vacuum that gets filled with old tapes, old fillers, old narratives. What is coming is something less tested, grainier, more soulful, tenderer, more vulnerable, more accessible, fresher, more pissed and stronger. And I'm not sure if it is music or poetry or a hybrid of the two. It's not nostalgic or dreamy or full of allusions to something that was supposed to happen but didn't. It is made up of the real, that much is undebatable ... It just isn't quite as real as what stood in for reality before, but that is about to change! If you look at Howard Johnsons, which reigned as the fast-food king of the family-oriented (white) Institution of the American Highway, you see something real that became a kind of orthodox institution with its sterile, uniformed, smiling waiters and waitresses and the clean, wholesome food they served that obeyed the dictates of the food-pyramid, with meat and fish (fish sticks), green beans, french-fries and one of 28 flavors of ice-cream for desert at the foundation.

It was all part of something we were being fed, first by the culture and then by the counter-culture. (I always find it amusing, that the "sixties" was really the second half of the '60s and the '70s.) Anyway, now it's all just a big complex that I have outgrown and let go, to make room for something that has not been detected, much less absorbed, by the culture yet. It is the stuff of a new culture. And in it there is nothing cliche' or intentionally obscuring or calculating or veiling or dreamy or dropping out. There is no reason to feed our heads anymore. (Our hearts know what to do.) There is nothing implicit in it either, and when it shows itself, there will be nothing behind it. Maybe I am saying it won't have a shadow or imply something not said but it will be exactly what it seems to be. It will be as different from what us old hippies knew as the old food pyramid is different from the new food pyramid, which is not just about food, but about the stories attached to the food, introducing more dimensions to the pyramid, a holographic pyramid. So will the new music and the new poetry be holographic, off-script. It will have a story and it will be linked up with so much of what has not yet been fully born, that we can't anticipate what form it will assume. Also I think it will be drug-free, because drugs monopolize our receptors so nothing real or profound or transformative can get through. It will be lucid and survival-rich. Like a 21ist-century "Songs of Experience". The writers of these new songs or new poems and new art-forms will have the backing of extremely powerful allies, such as Blake's Tyger burning bright.