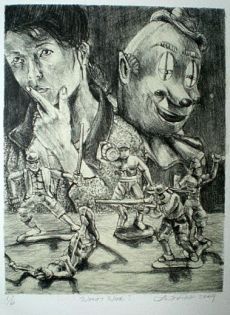 Beware Traitors against Duty, Honor and Country Behind Your Back
(Image by Akemi Ohira)   Details   DMCA
We must defend ourselves from ourselves from three interconnected fronts:

Trump's envy of North Korea, China, Brazil and Russian despots begs the question: what's Trump's end plan for America, if not the end of America?

What is the logical conclusion from, good people on both sides, caging brown children and condoning Blue on Black murder while condemning a Constitutionally guaranteed free press, scientific expertise and the removal of the very symbols that inspire such inhumanity - all while Conservatives in the Senate and in America's global economy remain silent for anything they say can be used against them in a court of law.

How does Trump get away with such blatant anti-American behavior? Answer: it's not just Trump resenting and resisting the exceptional potential of an American democracy. So, who has the most to gain from puppeteering an uncouth heathen profaning thought like a fifth-grade gutter mouth, for notoriety?

What does Trump's shocking rise to the American presidency remind us of: aging old money aristocrats trying to survive post Kaiser Wilhelm II, by controlling an ambitious wannabe?

What if the increase in Trump's outrageous projecting, it's not fair Tweets, prove both phycological collapse and spoon fed pablum from Conservative media, anti-Land of the Free rallies and dirty money emissaries like Kellyanne Conway and Steve Bannon - thinking us too stupid to, follow the money.

Remember when all we had to fear were lies denying our children and grandchildren would die from a mortally wounded planet, murdered by human induced Global Warming, increasingly changing our climate into a mauled entangled clump of dust-laden toxic air, choking on the slothful arsonists' campfire and cigarette burning debris, left behind without enough polluted water with which to drown our gluttony for self-destructive idolatry: worshiping a pied piper thinking himself, the Lone Ranger?

Does it make us miss, The only thing we have to fear is fear itself?

Then fear this: being tricked into believing the plagues of 2020 will, just disappear, like a puff of smoke from a peace pipe negotiation signaling the end of Red Cloud's war, magically evaporating our historic desecration of original Americans and raiding current tax dollars - to prove prowess of mask free males like Daniel Snyder, Trump and the DAPL Energy Transfer Partners, whose disregard of what's sacred reveals internalized masks hiding villainous missions of the real puppeteers.

No matter the history or Futures' past projections, politics or beachcombing, gender or benders, banquets or food deserts. race or racists, bar hoppers or governors - all living within The Republican Bond in Slop: The Wild Boar Nation are dwelling in a medically, economically and politically New Normal - vulnerable to Conservative Caucasian male Republicans more dangerous than Trump's collaborator, Vladimir Putin.

Still wounded by our sixties' assassinations, we've remained increasingly vulnerable to attacks, especially since 20 January 2001 - but only 9/11 and Russian hackers have been foreign invasions.

Our dishonest, morally bankrupt president bullying Whistleblowers, intimidating school districts, attempting to demoralize the very foundations of American democracy and the unrestrained extremes of COVID-19 magnifying our strengths and weaknesses, are domestic threats, aided and abetted by our, elected.