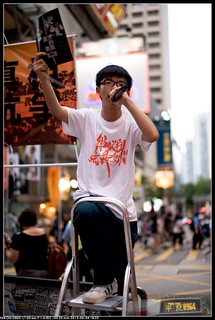 HONG KONG -- Western media has fabricated a lot of alternative Chinese "leaders" in the past, mostly useful dissidents and little helpers to the Western cause -morally and politically. But forget for a moment his Holiness the Dalai Lama, nude artist Ai Weiwei, blind lawyer Chen Guangcheng, and activist Liu Xiaobo, and welcome China's "new" most powerful leader (after its real leader and the country's president Xi Jinping): the teenage hero Joshua Wong Chi-fung.

If this sounds like dream fabrication, that's because it was carefully designed that way:

""the 18-year-old Wong doesn't look like Hollywood's idea of a charismatic rebel leader. But"" (Fortune Magazine)

"BUT he doesn't have too, as a recent opinion piece by Alex Lo in the South China Morning Post suggests. It's like trying to demonstrate that the 14th Dalai Lama is NOT an eternal, reincarnated Bodhisattva: We can't prove a negative. We can't possibly show that Joshua Wong is NOT a global leader after Fortune magazine made him out to be one -the No 10 in the world to be precise, only four slots behind Taylor Swift, the #blessed and #flawless singer of 'Call Me Maybe'.

It gets better. But first, don't get me wrong on this: It's all gold for Joshua. Other Hong Kong people worked and organized equally hard, but Joshua was chosen to personify the 'Umbrella Movement' (yes, we are talking about "in Western history books"). Still, if it looks like Western make-believe, it probably is Western make-believe. Fortune magazine has this to say:

"His nonviolent protest message and energetic idealism galvanized crowds that, over months, numbered in the hundreds of thousands."

It makes the young man appear to be the spiritual leader of hundreds of thousands, doesn't it? Well, he clearly wasn't, says Alex Ho. Most self-respected university students in Hong Kong who participated in the protests, if they believe in self-determination, would probably resent the idea of being part of some manufactured Western personality cult (or wouldn't they?). But that's all irrelevant now, because the Western media wants Joshua Wong to be the leader of that movement, and desperately so. (You could see this episode coming in previous reports from The Economist and NY Times, among others.). Here is why:

Just like in the popcorn movies: 'Exodus: Gods and Kings'

Some top-tier China-watchers --the likes of Gady 'Shadey' Epstein, Chris 'Buckfast' Buckley, and Michael 'the Knife' Forsythe, etc.-- probably decided that "This Joshua is epic material; we can hold him up there against Evil China and the Communist Party." (They mostly coordinate their output.) Which is what reminds me of the recent popcorn movie, 'Exodus: Gods and Kings', in which director Ridley Scott and his writers decided to have Our Lord speak through a boy angel, Malak, who orders Moses to lead God's favorite people (the Jews) out of Egypt. The name and moniker 'Joshua', which Wong Chi-fung goes by in Western media, need I say this, is borrowed from The Book of Joshua of the Hebrew Bible where 'Joshua', a former spy for Israel, eventually became the leader of the tribes.

So there you have it. The "news" of the coming of a new leader, or angel, or God's messenger quickly trickled down to second and third tier media organizations. No investigation, no fact-checking. Just mindless repetition. I know because I see the same stories, translated and paraphrased by the so-called 'China Experts', over and over again all over the world. And if some commentators complain about the propaganda, naturally they just add to its publicity - for free.

The Book Of Exodus

This drama of reliving the 'exodus' (of our ideological enemies) over and over again is, I claim, brought to near perfection in the West. We call it "creativity" [a divine inspiration] and often blame Asia for lacking it. To be sure, it makes the West unpredictable to foreign governments; yet unpredictability is obviously systematic: You look at Da Vinci's 'Mona Lisa' and asked "Why her?", or Van Gogh's 'Sunflowers' and go "Really?". From Jesus Christ's "I am the king of Jews and the son of God" to modern saviors like Barack Obama, Steve Jobs, or Mark Zuckerberg, it's all irresponsible idol-worship, designed to disrupt the lives of as many people as possible.

You have to admire Western boldness but, seriously, in this case scholarship has a better word for it: It's imperialism. China was awarded a new "global leader," molded by propaganda, imposed by a foreign power. Joshua has been hijacked and shamelessly exploited by a Western biblical narrative and sense of mission to civilize China. And if it doesn't comply, according to The Book of Exodus the land will be visited by "ten plagues." Good times for journalism.

I'm fine with that, I'm from the West; but the formula terrifies me: "Joshua's leading his people away from slavery -- China; and into the promised land -- America." It's a universal metaphor. We can pull this trick on any nation we don't like, really.

How Confucian Are We? The Rise of Confucianism in Europe

Chinese Statecraft, Confucian Humanism, and the Ethic of Responsibility