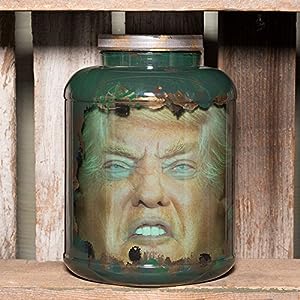 From the election of Fucko the Clown to his inauguration, I've started ... and stopped ... seven "moments." I can't finish them. I'll type out what I think is a pretty good sentence or paragraph, but when I read it again it just seems like so much junk. The stuff I write reads like the purple prose H.P. Lovecraft would crank out for Weird Tales magazine at a penny per word. But what the hell ... we're inside a Pulp Fiction world where every day is another issue of Amazing Stories. Just because something sounds like an article from Famous Monsters of Filmland doesn't mean it isn't true.

About a week ago, a friend of mine sent me an email with this subject line, "We are headed towards the demise of our Democracy."

That title just pisses me off. It implies that we're here ... the cliff is over there ... and we should all get together and do something before we go sailing off into the abyss.

I wrote back that I thought the "demise of our democracy" was pretty much a done deal when the Supreme Court decided who our president was back in December 2000. f*ck the voice of The People. George W. Bush is president of The United States -- so suck on that.

Then he wrote back that he thought the beginning of the "demise of our democracy" was the day JFK was murdered in 1963.

So if he thought it started in 1963, and I thought it was truly over in 2000, then Why The f*ck do we bother saying We are headed towards the demise of our Democracy almost 17 years too late?

I read the results of a poll that was taken on a Right Wing Forum. The subject was: "How long will you give Trump to come into sync with your personal ideas?"

Then one person posted, "I wonder, how long did everyone give Obama? An hour? A minute? Two seconds?"

Then the owner of the forum responded, "Niggers give him 100 years."

I can't remember how I stumbled onto that forum back in 1999. The Internet has always been a place where one click leads to another and sometimes I find myself down the rabbit hole. And 18 years ago I found myself in a Right Wing Swamp. I saved the link and periodically over the years I'd click on it to see what was riling up the crazy stupid people. They abhorred Hillary and went absolutely batshit when a black man moved into the White House. Of course they were racists. But this was the first time I saw that racism raw and raging. After Fucko won the election, the forum owner felt he could say "n-word" without any blowback. He was right. After five pages and 169 posts, nobody had called him on it.

The racism on the forum was always there ... but it was the thinly-veiled racism that bigots like my grandfather adopted when it became generally accepted that it wasn't okay to say "n-word" in public anymore. But now Fucko is the president and they can drop the act.

Some 45 years ago I became aware of the fact that the government of The United States was trying to kill me. I wasn't paranoid or anything. I mean I knew the government wasn't out to kill me personally. They just wanted to kill as many Vietnamese (more...)
Related Topic(s): Election; Hitler; N-word, Add Tags
Add to My Group(s)
Go To Commenting
The views expressed herein are the sole responsibility of the author and do not necessarily reflect those of this website or its editors.