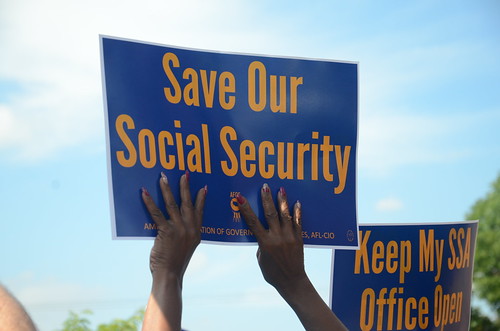 April is National Social Security Month, which is a wonderful idea for a holiday.

In my wildest dreams, Social Security would get regular ticker-tape parades and fireworks, complete with dancing in the streets.

But let's face it: Even though Social Security keeps 21 million seniors, Americans with disabilities, and survivors out of poverty, it doesn't provide much to live on. On average, Social Security checks come out to less than $1,350 a month. And two-thirds of seniors rely on those checks for most of their retirement income.

We need to protect Social Security from the Republicans who want to cut it -- the same Republicans who just decided that they could afford a $1.5 trillion tax scam to benefit the rich and the powerful.

But stopping cuts isn't enough. We need to protect and expand Social Security.

There are a bunch of reasons why seniors need a raise:

In short: It's getting harder and harder to save for a retirement that's getting more and more expensive.

And we can't count on people being able to keep working for longer. That's just not always physically possible. Think about construction and factory workers who've been beat up by the job, or nurses who've spent years on their feet holding up tottering patients, or teachers who've picked up children all day long in preschool.

Expanding Social Security would make a real difference for families -- and it would ensure our country keeps it promises to America's working people.

But the GOP disagrees. After the tax scam blew a $1.5 trillion hole in the federal budget, Paul Ryan said his next big idea was cutting Social Security in the name of fiscal responsibility. And President Trump didn't just talk about it -- he actually proposed a budget that would slash social security funding by millions. Oh, please.

It's a classic Republican two-step -- a tale as old as time: First, they pass huge, reckless tax breaks for the wealthy and the big corporations. Then they say we can't afford to keep our commitments to seniors and working families. And they play dumb if anyone tries to connect the dots.

This is about dollars and cents, but it's also about our values: We look after one another. We all contribute, and when we need a hand, we can turn to each other to help make it through.

Let's stand up to Republicans and re-double our commitment to working families. Sign our petition if you agree: We need to protect and expand Social Security.

Thanks for being a part of this. And happy National Social Security Month!

Related Topic(s): Needy; Pensions; Protectionism; Retirement; Social Security; Social Security Cuts; Workers, Add Tags
Add to My Group(s)
Go To Commenting
The views expressed herein are the sole responsibility of the author and do not necessarily reflect those of this website or its editors.