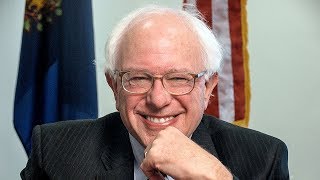 If we are going to defeat right-wing Republicans in 2018 and 2020, we need to win in states that Trump won, like Pennsylvania. And, in my view, the only way we win in those states is by supporting progressive candidates who have the guts to defend working-class families -- white, black, Latino, Asian American, Native American -- and take on the power and greed of the billionaire class.

Here's some very good news. In Pennsylvania there are two strong progressive candidates who can win their primary fights and win the general election. But they need your help.

As you know, Donald Trump represents something we have never seen before in the history of the United States. It is not just that he represents the interests of the wealthy and powerful. It's that we have never had a president with more authoritarian tendencies than him.

The 2018 midterm elections will be long remembered as a pivotal moment in American history because, if we are successful, we can put an end to the disastrous Trump agenda. If we are not, we will have at least two more years of a rapid shift toward authoritarianism, the further normalization of corruption and the continued rise of oligarchy.

But we cannot defeat Trump and the Republican Party with the same playbook, or by supporting the same kind of candidates long favored by the political establishment and financial elite. That is how we got to where we are today.

That is why I recently traveled to Pennsylvania to support two strong progressive candidates: Greg Edwards for Congress and Jess King for Congress. Their primaries are on May 15, and they need your help now. So here is the part where I ask:

Split a $3 donation between Greg Edwards and Jess King today.

Our job in 2018 is to take on and defeat Trump's authoritarianism, xenophobia, racism, sexism, homophobia and religious bigotry. But we can only do that if we run candidates who can rally the American people around an agenda that works for them, not the billionaire class.

For the past 25 years, Greg Edwards has worked tirelessly to organize for justice in health care, education and economic dignity. The powerful grassroots movement behind Greg Edwards is championing Medicare for all, universal pre-k, debt-free college and raising the minimum wage, and he is living his values of unwavering inclusion by building the diverse coalition Democrats need to win in his district.

Jess King has seen firsthand how the biggest corporations have hurt workers and squashed competition. In Congress, she will work to pass Medicare for all, rein in Wall Street, break up corporate monopolies, and support the real job creators: small businesses in our local economies.

These are great candidates you can be proud to support. Please make a donation today. Please help create a progressive Pennsylvania and a progressive America.

Candidates like Greg and Jess will help us stop Trump while ushering in an era of strong progressive change in this country. Thank you for supporting them. They need our help.

Related Topic(s): 2018; Greg Edwards; Jess King; Party Politics Democratic; Republican-slime-machine; Support, Add Tags
Add to My Group(s)
Go To Commenting
The views expressed herein are the sole responsibility of the author and do not necessarily reflect those of this website or its editors.