Source: The Guardian
Yes, the economy is improving, but too many Americans are being left behind, while the rich keep getting richer 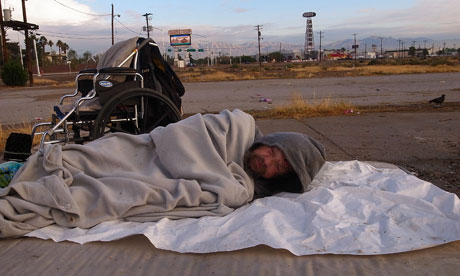 (Image by Unknown Owner)   Details   DMCA
Out of luck in Las Vegas: a homeless man sleeps at an encampment in Las Vegas, Nevada, a state which has had one of the highest home foreclosure rates in the nation. Photograph: Spencer Platt/Getty Images

The front pages of American newspapers are filled with stories about how the US economy is recovering. There is some truth to that. Since President George W Bush left office in 2009, significant progress has been made in moving our economy out of the abyss of the worst economic downturn since the Great Depression of the 1930s. But in the midst of this slow recovery, we must not accept a "new normal."

We must not be content with an economic reality in which the middle class of this country continues to disappear, poverty is near an all-time high and the gap between the very rich and everyone else grows wider and wider.

The good news is that instead of losing more than 700,000 jobs a month as we were five years ago, we've been gaining almost 200,000 jobs a month since January. The bad news is that, in addition to those job numbers being much too low, nearly 60% of the jobs gained since the "recovery" are low-wage jobs that pay less than $14 an hour, while most of the jobs lost during the recession were decent-paying middle-class jobs.

The good news is that housing prices are beginning to rise, providing some additional wealth for most home owners. The bad news is that from 2009 -- 2011, all of the new wealth generated in this country went to the top 7% of American households, while the bottom 93% saw a net reduction in their wealth. Further, the US has more wealth inequality than any major country on earth with the top 1% now owning 38% of the financial wealth, while the bottom 60% owns just 2.3% of the wealth.

The good news is that, since 2008, the deficit has been cut by more than half. In 2008 it was $1.4tn, this year it will be about $642bn. The bad news is that many working class families can no longer afford the outrageously high cost of college, and the average American student leaves school about $25,000 in debt, with graduate students running debts far higher.

The good news is that if you are a CEO of a large corporation, you are now making 350 times more than your average employee. The bad news is that unemployment benefits have been cut, making it harder for the long-term unemployed to live in dignity.

The American people get the economic realities. According to a Gallup poll, nearly six out of 10 believe that money and wealth should be more evenly distributed among a larger percentage of the people in the US, while only a third of Americans think the current distribution is fair. A record-breaking 52% of the American people believe that the federal "government should redistribute wealth by heavy taxes on the rich."

The United States Congress and the president must begin listening to the American people. While there clearly has been some improvement in the economy over the last five years, much more needs to be done. We need a major jobs program which puts millions back to work rebuilding our crumbling infrastructure. We need to tackle the planetary crisis of global warming by creating jobs transforming our energy system away from fossil fuels and into energy efficiency and sustainable energy.

We need to end the scandal of one of four corporations paying nothing in federal taxes while we balance the budget on the backs of the elderly, the children, the sick and the poor.

Related Topic(s): Economic Crisis; Economic Justice; Jobs; Taxes; Unemployed, Add Tags
Add to My Group(s)
Go To Commenting
The views expressed herein are the sole responsibility of the author and do not necessarily reflect those of this website or its editors.