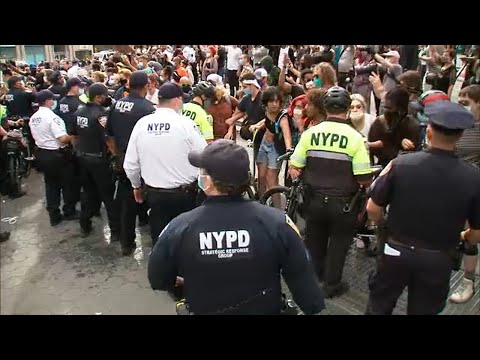 What follows is an updated essay on the "perennial nature of U.S. urban riots" which I wrote a little over five years ago. The original version appeared on my blog on 9 May 2015 following racial rioting in the city of Baltimore. The murder of George Floyd, an African American, by police in Minneapolis on 25 May 2020, coming as it did within days of the killing of two other African Americans, largely replays events of 2015.

In those five years, despite having elected the nation's first African American president in 2008, the U.S. is still a largely segregated society full of racist anger. Indeed, it would seem that with the culture wars of the past 30 years and the 2016 election of Donald Trump as president, things are getting worse rather than better. We are slipping back into a more primitive, angrily divided time.

Part I -- Unrest That is Almost Normal

If one goes to Wikipedia under the subject of "mass racial violence in the United States," one will find a "timeline of events" running from 1829 to 2015. There are so many race-related riots listed for these 186 years that, from a historical point of view, rioting appears almost normal. Prior to World War II these outbreaks mostly involved ethnic, racial or religious groups going after each other: Germans, Italians, Poles, Jews, Hispanics, African-Americans, Chinese, Catholics, Protestants were all involved in these set-tos. Often the causes were economic with a territorial overtone -- one group moving into the neighborhood of another group and/or taking their jobs. When the violence came, it was group against group.

In the post-World War II era, the nature of the still numerous instances of rioting changed. The group-versus-group scenario gave way to group-versus-state. Most of the groups listed above had successfully assimilated under the heading "caucasian," and religious affiliations no longer seemed worth bloody murder. As our present reactionary president has shown, immigrants can still instill anger in obtuse citizens who mistake foreigners for the cause of problems they themselves have caused, but in this case the result is state oppression.

Actually, in the present era, the cause of rioting has mostly been African American resentment over prevailing inequality exemplified by frequent police brutality. It is a continuing fact that American society still places on most African Americans an economic handicap and segregation. Thus all too many African Americans, particularly men, have little opportunity for a decent life, while simultaneously having every opportunity to end up in confrontations with the police and then land in prison. It is these ubiquitous confrontations with agents of the state that are now the standard trigger to the phenomenon of modern American rioting.

Part II -- The Inadequacies of the Civil Rights Acts

The ongoing phenomenon of urban riots involving African Americans suggests that the civil rights acts that followed the widespread unrest of the mid-1960s have proved inadequate. In part this is so because their enforcement, such as it has been, was restricted to the public realm. That is, the effort to do away with discrimination went no further than areas serving the public: public schools and housing, restaurants, hotels, theaters, and the like. There were other aspects to the civil rights acts -- grants to minority businesses, for instance -- but they all just scratched the surface. As a result the number of African Americans made upwardly mobile by this legislation was less than optimal. A black middle class did emerge, but it was small relative to the numbers who needed help.

To say that the civil rights acts proved inadequate in the fight against nationwide discrimination points to the fact that they proved unable to reorient America's discriminatory cultural mindset. That mindset was the product of, among other things, nearly three hundred years of institutional racism. To change things was going to take the consistent reinforcement of the idea of racial equality over at least three or four generations. This would have to be done mainly through the educational system, yet no specific efforts were made to this end. Indeed, even attempting to integrate the public school systems could provoke their own riots, as the "Boston busing crisis" of 1974 proved.

Another sign of this problematic cultural mindset is that, as far as I know, there is nowhere among the vast, mostly white, population of the American suburbs, where one can find serious empathy for the fate of the inner cities. For instance, in the wake of the April 2015 riots in Baltimore, then mayor of Philadelphia, Michael Nutter, commented, "local government cannot itself fix problems of violence and unemployment." This is absolutely true, but Nutter, and mayors who have followed him, have looked in vain for any meaningful help from a state legislature controlled by a hinterland of conservative whites who may not feel they belong to the same species, much less the same broader community, as those in the inner cities. The suggestion that they should send their tax money to help the residents of Philadelphia appears to be beyond their understanding. I doubt very much if it is different elsewhere in the country.

The police, of course, cannot stand outside the general discriminatory orientation of the culture. So the limited impact of the civil rights acts meant that the police were not reeducated to the new standards of public behavior. To do so would have required more than simply increasing the number of black officers to at least match the racial demographics of American cities. It would have required extensive retraining and testing of those who sought to be part of law enforcement.

Related Topic(s): America; Discrimination; Police; Protest; Race; Rebellion; Urban Warfare; Violence, Add Tags
Add to My Group(s)
Go To Commenting
The views expressed herein are the sole responsibility of the author and do not necessarily reflect those of this website or its editors.