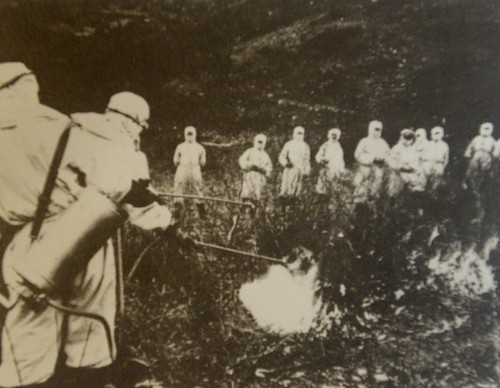 This happened some 63 years ago, but as the U.S. government has never stopped lying about it, and it's generally known only outside the United States, I'm going to treat it as news.

Here in our little U.S. bubble we've heard of a couple versions of a film called The Manchurian Candidate. We've heard of the general concept of "brainwashing" and may even associate it with something evil that the Chinese supposedly did to U.S. prisoners during the Korean War. And I'd be willing to bet that the majority of people who've heard of these things have at least a vague sense that they're bullshit.

If you didn't know, I'll break it to you right now: people cannot actually be programed like the Manchurian candidate, which was a work of fiction. There was never the slightest evidence that China or North Korea had done any such thing. And the CIA spent decades trying to do such a thing, and finally gave up.

I'd also be willing to bet that very few people know what it was that the U.S. government promoted the myth of "brainwashing" to cover up. During the Korean War, the United States bombed virtually all of North Korea and a good bit of the South, killing millions of people. It dropped massive quantities of Napalm. It bombed dams, bridges, villages, houses. This was all-out mass-slaughter. But there was something the U.S. government didn't want known, something deemed unethical in this genocidal madness.

It is well documented that the United States dropped on China and North Korea insects and feathers carrying anthrax, cholera, encephalitis, and bubonic plague. This was supposed to be a secret at the time, and the Chinese response of mass vaccinations and insect eradication probably contributed to the project's general failure (hundreds were killed, but not millions). But members of the U.S. military taken prisoner by the Chinese confessed to what they had been a part of, and confessed publicly when they got back to the United States.

Some of them had felt guilty to begin with. Some had been shocked at China's decent treatment of prisoners after U.S. depictions of the Chinese as savages. For whatever reasons, they confessed, and their confessions were highly credible, were borne out by independent scientific reviews, and have stood the test of time.

How to counter reports of the confessions? The answer for the CIA and the U.S. military and their allies in the corporate media was "brainwashing," which conveniently explained away whatever former prisoners said as false narratives implanted in their brains by brainwashers.

And 300 million of so Americans more or less sort of believe that craziest-ever dog-ate-my-homework concoction to this day!

There isn't any debate that the United States had been working on bio-weapons for years, at Fort Detrick -- then Camp Detrick -- and numerous other locations. Nor is there any question that the United States employed the top bio-weapons killers from among both the Japanese and the Nazis from the end of World War II onward. Nor is there any question that the U.S. tested such weapons on the city of San Francisco and numerous other locations around the United States, and on U.S. soldiers. There's a museum in Havana featuring evidence of years of U.S. bio-warfare against Cuba. We know that Plum Island, off the tip of Long Island, was used to test the weaponization of insects, including the ticks that created the ongoing outbreak of Lyme Disease.

Dave Chaddock's book This Must Be the Place, which I found via Jeff Kaye's review, collects the evidence that the United States indeed tried to wipe out millions of Chinese and North Koreans with deadly diseases.

"What does it matter now?" I can imagine people from only one corner of the earth asking.

I reply that it matters that we know the evils of war and try to stop the new ones. U.S. cluster bombs in Yemen, U.S. drone strikes in Pakistan, U.S. guns in Syria, U.S. white phosphorus and Napalm and depleted uranium used in recent years, U.S. torture in prison camps, U.S. nuclear arsenals being expanded, U.S. coups empowering monsters in Ukraine and Honduras, U.S. lies about Iranian nukes, and indeed U.S. antagonization of North Korea as part of that never-yet-ended war -- all of these things can be best confronted by people aware of a centuries-long pattern of lying.

And I reply, also, that it is not yet too late to apologize.

David Swanson is the co-founder of AfterDowningStreet.org and the author of the book "Daybreak: Undoing the Imperial Presidency and Forming a More Perfect Union" by Seven Stories Press. You can order it and find out when tour will be in your town: (more...)
Related Topic(s): Anthrax; Bio-weapons; CIA; Cholera; Encephalitis; Korea; Korean War; Lyme; Nazis; North Korea Versus South Korea, Add Tags
Add to My Group(s)
Go To Commenting
The views expressed herein are the sole responsibility of the author and do not necessarily reflect those of this website or its editors.