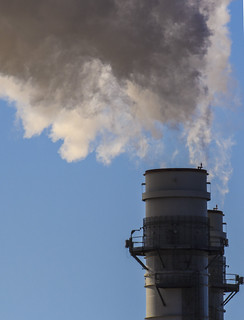 Featured prominently on the cover of the Week in Review section of today's NYTimes is Henry Paulson, arguing for strong new programs to mitigate climate change. Paulson was head of Goldman Sachs, appointed Secretary of the Treasury in the cabinet of George W. Bush. Read his op-ed here.

Paulson argues for the right measures, but uses questionable reasoning to get there. His approach is purely economic, and acknowledges no value to the living, natural world apart from its dollar value. He speaks of a "climate bubble", invoking our memory of the "credit bubble" that he managed so expertly in 2008.

Restructuring the energy economy to reduce CO2 emissions is for Paulson the purchase of an insurance policy. He has evaluated the risk reduction, compare it to the cost of the insurance, and he offers us his conclusion: The insurance is a good buy.

Paulson argues for a "tax on carbon emissions." This is different from a carbon tax, more narrowly focused, and working intensely through one segment of the economy, with ripples, of course, that will affect everything else. He asks that the US government take "leadership" on this issue, and then notes that we have already built our infrastructure, while China is still building theirs. Large reductions in CO2 emissions would be so much easier for China than America.

"I'm a businessman, not a climatologist."

The second perspective comes from Charles Eisenstein. If you are not already familiar with Eisenstein's thinking, his is a fresh, new voice. Drawing on a widely-cultured knowledge of science, history, anthropology, philosophy, psychology and literature, he offers a radical economics based on human and communitarian values. He envisions a path back to our roots without abandoning what is best of industrial and information technologies. This video provides a good 12-minute introduction.

Eisenstein's full article from Resurgence Magazine is well worth reading and pondering. He fully supports climate change mitigation, and endorses the science on which it is based, but he says that the danger of global warming is not the best reason for us to burn less gas, to conserve resources, to rely more on local production, to simplify and re-focus our lives.

To focus narrowly on the quantity of CO2 emissions risks that our movement might be hijacked toward "solutions" that create other problems: nuclear power, hydro dams in sensitive ecologies, aggressive development of natural gas.

Many of the technologies I find beautiful might also be justified on climate change grounds: agricultural practices that regenerate the soil; restoration of forests and wetlands; smaller homes in higher density communities; economies of reuse, upcycling, and gift; bicycle culture; home gardening. As such, I am wont to tolerate climate change arguments as a useful ally, a legitimiser of things that I wish people would embrace on their own merits.

Whatever the subject, Eisenstein brings a holistic approach, beginning with a reverence for natural and traditional systems in all their complexity, their beauty and resilience. It is linear thinking, reducing webs of interdependence to single causes, that has got us into this predicament. We won't solve our problems by applying the same economic methodology to a the new target of CO2.

Many of us within the Climate movement see the necessity of compromising with the economic power structure in order to piece together the coalition we need to save the planet from an impending disaster. But Eisenstein is leery of compromise. "The cynic thinks that he is being practical and that the hopeful person is not. It is actually the other way around. Cynicism is paralyzing, while the naïve person tries what the cynic says is impossible and sometimes succeeds." He asks of us no less than "to challenge key invisible narratives that drive our civilisation."

Eisenstein leads us back from what he calls the "Age of Separation" into the connected, communal existence that is our birthright, restoring connection to each other, to nature, and even to our own deep knowledge of what is right and good for us.

"Paradoxically, the path to achieve the impossible consists of many practical steps, each of them possible...So I am not suggesting we forgo the practical, the doable. It is that the practical is not enough unless put in service to the impractical."

Related Topic(s): Change; Global Warming; Henry Paulson, Add Tags
Add to My Group(s)
Go To Commenting
The views expressed herein are the sole responsibility of the author and do not necessarily reflect those of this website or its editors.