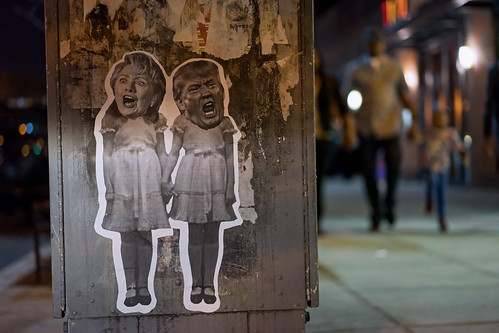 Part I -- Bigotry and High Office

To find bigots in political office in the United States is not historically unusual. In fact, up until the 1960s and the Civil Rights Movement, publicly recognizable bigots in office was the norm in many parts of the country. Even in the post-1960s era we find presidents such as Nixon and Reagan who could be openly bigoted. However, most recent office holders have known enough to keep their prejudices off of the public airwaves.

It is a sign of the fragility of the changes in national character wrought by the Civil Rights Movement that the inhibitions holding back public expressions of bigotry are wearing thin. And that has set the scene for the current contest for the presidency in which both major parties have thrown up (no pun intended) bigoted candidates. Yes, that is right, two of them, not just one.

On the Republican side the bigot is easy to spot. That is because Donald Trump wears his bigotry on his sleeve, so to speak. He can't help but display it because, apparently even at this late date, he doesn't understand what the big deal is. On the campaign trail he has insulted Mexicans, Muslims and "our African-Americans," and gotten away with it because millions of his supporters are also bigots.

A common bigotry is one of the reasons they cheer him on. However, now that he is the "presumptive" Republican candidate for president, much of that party's leadership and their media allies have begun to call him on these problematic public expressions. They want to see Trump act "presidential," hiding away his prejudices for the sake of achieving maximum appeal. Alas, this is not easy for a man who, all of his life, said what he thought, no matter how improper. He sees it as "just being honest," and up until the run for president, his wealth had helped forestall most public criticism.

On the Democratic side the bigot is not so easy to spot, but the problem exists in any case. Hillary Clinton may not be a bigot in the same way as Trump. She certainly isn't going to go about insulting ethnic groups with large numbers of potential voters. Indeed, she has cultivated many minority groups and is supported by them. But such outreach has its limits, and in one important case she is willing to act as a de facto bigot in order to cater to a politically powerful interest group. Having actively done so, the difference in ethical behavior between her and Mr. Trump starts to blur.

In what way is Hillary Clinton, now the "presumptive" presidential candidate of the Democratic Party, behaving like a de facto bigot? She does so in her open, prosecutorial hostility toward the fight to liberate Palestinians from the racist oppression of Israel and its Zionist ideology. Clinton, having in this case traded whatever principled anti-racist feelings she has for a fistful of campaign dollars, has openly sided with the Zionists. And, as she must well know, they are among the world's most demonstrative bigots. Having made this alliance, she praises Israel as a democratic state upholding the highest ideals and ignores or justifies the illegal and blatantly racist treatment of its Palestinian population. In fact, she wants to reward Israel for its racist behavior and policies by pretending that to do so is to assist in the necessary self-defense of the Zionist state.

At the same time, Clinton is willing to attack those who fight against Israeli bigotry, particularly in the form of the Boycott, Sanctions and Divestment (BDS) movement. Disregarding U.S. law, she has pledged herself to destroy the BDS movement even if she has to rip to shreds the First Amendment of the Constitution to do it. And -- here is the irony of it all -- she claims she has taken this position in order to fight anti-Semitism, one of history's most pronounced bigotries.

This rationale, that she backs a state full of infamous bigots in the name of defending against bigotry, is just so much sophistry. If there is an increase in the number of anti-Semites in today's world, we can thank Zionist racism for that development. However, anti-Semitism does not motivate the BDS movement, which in the U.S. is backed by a large and growing number of Jews. No, the reason Clinton has targeted BDS is because it has proved an effective weapon against Israeli racism, and therefore her Zionist allies have oriented her in that direction.

The problem for Hillary is that if you ally with bigots and actively do their bidding, you too become a de facto bigot. Unlike Trump, who may or may not understand the offensive nature of his behavior, Clinton knows exactly what she is doing. Trump is a bigot by upbringing and social conditioning. Hillary is a bigot by choice. I will leave it to the reader to decide who is worse.

There are many considerations that go into choosing the candidate for whom to vote come November. If she plays her cards right, Clinton may win over enough of the Sanders supporters to defeat Trump. However, if you are inclined to vote for Hillary, don't kid yourself that what your are going to get is an upright, ethical president unwilling to adopt openly bigoted policies against vulnerable and long suffering peoples. Clinton has clearly abandoned such standards of behavior.

Related Topic(s): Bigotry; Donald Trump; Hillary Clinton; Israel; Presidential Candidates, Add Tags
Add to My Group(s)
Go To Commenting
The views expressed herein are the sole responsibility of the author and do not necessarily reflect those of this website or its editors.