"To announce that there must be no criticism of the President . . . is not only unpatriotic and servile, but is morally treasonable to the American public. Nothing but the truth should be spoken about him or anyone else. But it is even more important to tell the truth, pleasant or unpleasant, about him than about anyone else." Theodore Roosevelt, Editorial in The Kansas City Star May 7, 1918. (And that's Kansas City, MO.)

The United States Constitution, for all of its defects in terms of the protection of the institution of slavery such as the Electoral College, established four totally unique features of government in comparison with all the forms of government that had preceded it. Three of them have direct application to the consideration of the brand-new "Dershowitz" and "McConnell" Rules (see below), now, under this Senate at least, part of the Highest Law of the Land.

Scene at the Signing of the Constitution of the United States. No Dershowitz' or McConnells there.
(Image by (Not Known) Wikipedia (commons.wikimedia.org), Author: Author Not Given)   Details   Source   DMCA

First, the framers determined that there are three primary functions of any government: the legislative, the executive, and the judicial. Second, they decided that there should be a governmental branch for each function, and each should have certain powers independent from the other two. In no way should the executive branch be supreme, as it had been in all previous governmental models. (Of course, that model has continued to command governments in a variety of nations down to our present time, a certain "I can do whatever I want" President has said that he would like to find himself in their company.)

Third, they decided (with a major assist about 15 years after the Constitution was written by the third Chief Justice of the United States, John Marshall) that the interactions of the three branches would put them on a somewhat equal footing. (Under the Trump Administration, with a strong assist from the Trumpublicans© in the Senate, that delicate balance is beginning to break down; see further below.) The fourth unique feature, representative government, does not have direct application to the present case. (Of course, at the beginning that feature did provide for only a limited electoral mandate, which the Trumpublicans©, with voter suppression and gerrymandering, are working hard to reinstate, but that is another matter.)

In Article II, Sect. 2 the United States Constitution provides for very limited powers for the President. It is short enough that I can reproduce it here without overwhelming the column:

"The President shall be Commander in Chief of the Army and Navy of the United States, and of the militia of the several States, when called into the actual service of the United States; he may require the opinion, in writing, of the principal officer in each of the executive departments, upon any subject relating to the duties of their respective offices, and he shall have pow­er to grant reprieves and pardons for offenses against the United States, except in cases of impeachment.

"The President shall have power to fill up all vacancies that may happen during the recess of the Senate, by granting commissions which shall expire at the end of their next session."

Of course, over the centuries since the adoption of the Constitution many powers other than the ones enumerated above have been granted to the President, by the Congress. Over time I have read the above section as it stands numerous times. Nowhere in it, nor in any of the laws of Congress broadening Presidential Power, that come to mind, such as the War Powers Act, have I found any power approaching "if he thinks some policy or other maneuver is good for the country, including some action to promote his re-election whether or not there are other aspects of it he can carry that out without limit."

This is the Dershowitz Rule. Subsequently he tried to "walk it back ," (funnily enough on the president's favorite medium for everything from announcing new national policy, to firing officials from his Administration, to engaging in his favorite political tactic, "Always attack; Never defend" against all and sundry opponents). But that is all unofficial. What is official, and he was speaking as a member of the President's defense team, is what he said that is in the Congressional Record. 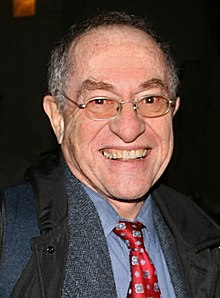 Steven Jonas, MD, MPH, MS is a Professor Emeritus of Preventive Medicine at StonyBrookMedicine (NY) and author/co-author/editor/co-editor of over 35 books. In addition to his position on OpEdNews as a "Trusted Author," he is a Senior Editor, (more...)
Related Topic(s): Constitutional Amendments; Constitutional Crisis; Constitutional Issues; Constitutionalism; Dershowitz; Gerrymandering; Hitler; Impeachment; McConnell-Mitch; Militia; (more...) President; Republican; Senate; Trump, Add Tags  (less...)
Add to My Group(s)
Go To Commenting
The views expressed herein are the sole responsibility of the author and do not necessarily reflect those of this website or its editors.