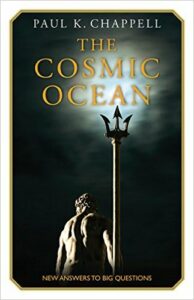 "I was sleeping peacefully late one night when I felt someone grab my leg and drag me from my bed onto the floor. My leg was pulled so hard I heard my pajama pants rip down the middle. Looking up and seeing my father, I began to panic as he pulled my hair and told me he was going to kill me."

Paul Chappell is recounting an incident from when he was four years old. The terror of such unpredictable attacks in the years that followed traumatized him. Chappell's father had been traumatized by war, and Chappell would also end up joining the military. But over the years, Paul managed to turn his childhood trauma, not into a continued cycle of violence but rather into a means of gaining insight into how the institution of mass violence might be ended.

Chappell's latest book, The Cosmic Ocean: New Answers to Big Questions, is the fifth in a projected seven-part series. Like a sculptor pounding out variations on a theme, Chappell each year produces a newer, thicker, wiser, and more illuminating take on the questions that tear at his heart: How can we be so kind and cause such suffering? How can we fail to care about others just like ourselves? What sort of change is possible and how can it be brought about?

I'm usually wary of anything that could be repetitive or pedantic, as life is just too short and I just too rebellious. But Chappell is repetitive because he is a teacher, and he is becoming a better teacher every year. He wants us to understand important truths in a variety of contexts, to remember them, and to act on them. As with his previous books, I once again recommend the latest one as the best, but encourage reading them all. Skip a presidential debate or two if you have to.

I'm always wary of efforts to solve war by finding inner peace. "Does the Pentagon give a flying f-- if you've got inner peace?!" I've been known to scream, very unpeacefully. "Will your forgiving of your obnoxious neighbor and your spreading of harmony through your neighborhood stop Raytheon and Boeing and Lockheed from profiting off another war on Libya?" But, in fact, Chappell is examining the reasons people become violent and accepting of violence at least in part in order to understand what it would take to create a society in which Donald Trump would speak to entirely empty coliseums, and any Congress member who failed to end a war would be confronted by a unanimous constituency insisting on peace. Chappell's point is not to shut out the world, but to understand better how to change it.

I generally object to investigations into "human nature" as I believe the concept primarily serves as an excuse for nasty behavior, and I'm unaware of any empirical means of determining what actions do and do not qualify as "human nature." But Chappell is not trying to identify a mystically correct moral behavior in order to insist that we imitate it. He's trying to accurately grasp the motivations of even the most damaging actions, in part in order to enlarge our capacity for empathy -- and in part in order to re-classify certain types of behavior as illness. He's also exposing the use of "human nature" as an excuse.

"When someone gets malaria, cancer, or HIV," writes Chappell, "I have never heard anyone say, 'Oh, that's just human nature,' because people realize something has gone wrong with the human body. But if someone becomes violent, people often say, 'Oh that's just human nature,' which assumes that violence is an essential part of being human (like eating and sleeping), rather than the result of something that has gone wrong. But what if violence, like an illness, has a cause that we can understand and prevent?" Chappell includes among such causes, "poverty, desperation, injustice, dehumanization, ignorance, bullying, and trauma."

Of course it's a choice we make to categorize something as an illness, not an eternal discovery about "human nature," but it is a wise choice when we're talking about violence and war.

A traumatized person, Chappell writes, wants others to understand the trauma and sympathize with their suffering. But how can they communicate the trauma? They can try ordinary speech or art, but often another medium appears superior: violence. By making others feel the same pain, a traumatized person can finally make himself understood. As a sophomore in college, Chappell happened to mention to his classmates that when he'd been bored in high school he'd fantasized about killing all of his fellow students. Chappell assumed that this was universal, but his college friends reacted with horror.

Chappell came to understand that a desire for violence can arise out of trauma, and that it was not typical. "Cruel actions, if we define them as inflicting, watching, and enjoying the suffering of a living creature (without that creature's consent), are relatively rare in the world," he writes. A member of an ancient culture who believed that a child sacrifice would appease the god or gods and save a society might, and in various accounts did, deeply regret having to kill a child, but acted on the basis of a false belief.

I might add that most religious believers these days don't act on their beliefs in ways that conflict with broader society. Exceptions include, on the plus side, those who protest at drone bases in the name of Jesus, and on the negative side, those who sacrifice chickens, deny their kids medicine, or disregard climate change on the grounds that it's not in the Bible. Willful ignorance can muddy up the question of feeling empathy for someone acting from within a particular worldview, but only slightly. As we develop a habit of empathizing, it should reach more and more people and behaviors. Empathizing is, of course, a different thing than supporting, justifying, or excusing.

Chappell suggests, however, that building empathy depends on building accuracy: "When we search for the underlying causes of problems and arrive at inaccurate answers, it can silence our empathy. For example, if you believe a baby girl is born with a disability because she is cursed by the gods or paying back bad karma from a past life, it can reduce your empathy not only for her, but also her family."

Empathizing with more individuals, Chappell argues, can also result in greater feelings of empathy for humanity as a whole, and as a result greater confidence in the ability of great masses of humanity to improve our ways: "[W]hen we believe that humanity is born evil, naturally violent, and destined to forever wage war, it can silence our empathy, but the scientific understanding that violence is instead caused by trauma and other preventable factors offers us a more accurate (and empathetic) understanding of human beings."

Another route toward empathizing with humanity all over the earth today (and perhaps even losing the need to "humanize" each new person before we can care about them) is learning to empathize with human generations long past: "The reason I am discussing the enormous challenges our ancestors overcame is because we must strengthen our respect, empathy, and appreciation for human beings and stop viewing ourselves as a cancer or virus upon the earth."

But aren't we a virus upon the earth? Haven't we launched a mass extinction of millions of beautiful species, possibly including our own? Perhaps we have. But we won't avoid it, assuming we can avoid it, by viewing ourselves as cancer. That's a recipe for hopelessness, and also for cruelty and war -- which can only make matters dramatically worse. If we are to save ourselves we have to understand that we are worth saving, and that even our virus-like activities are generally well-intended.

David Swanson is the author of "When the World Outlawed War," "War Is A Lie" and "Daybreak: Undoing the Imperial Presidency and Forming a More Perfect Union." He blogs at http://davidswanson.org and http://warisacrime.org and works for the online (more...)
Related Topic(s): Peace; Peace; Trauma; Trauma; Veterans; Veterans, Add Tags
Add to My Group(s)
Go To Commenting
The views expressed herein are the sole responsibility of the author and do not necessarily reflect those of this website or its editors.