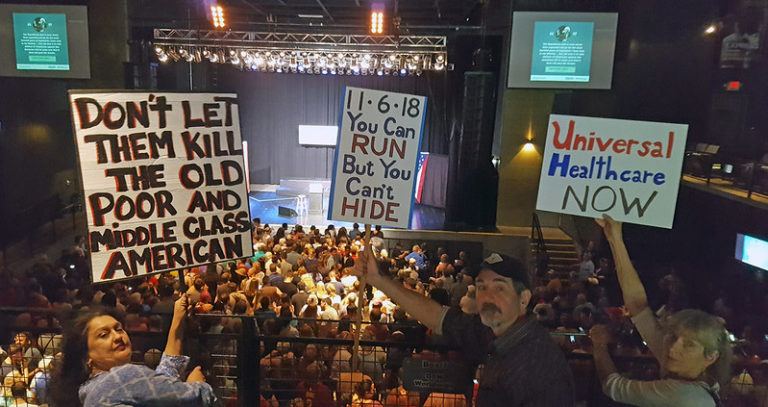 It isn't un-American for voters to do some homework before voting. Here's a "concise guide" for the voter with limited time who might want more information.

The corporate Democratic Partiers keep questioning the electability of candidates they do not like, namely Bernie Sanders and Elizabeth Warren. Really? These leading progressives are absurdly presumed to be "unelectable" compared to Trump?

Consider an election where Bernie is up against Trump. The differences are night and day. Start with the all-important issue of character. Trump lies every day, tweeting misinformation and falsifying what is and what is not going on in our country. Just as bad, Trump's tactics rely entirely on lying about or misrepresenting what he is doing to handle large and small problems. Trump has made over 16,000 false or misleading claims since January 2017. Bernie bluntly tells the truth.

Trump is a bigot/racist who uses dog whistles to promote, implement, and enforce racist policies. Bernie is a civil rights fighter going back to the nineteen sixties.

Bernie respects women and champions their causes. Donald is a savage sexual predator, has boasted about his sexual conquests, and was a serial adulterer.

Bernie talks of peace and rule of law. Donald incites violence and believes in the rule of raw power by a president who is lawless and daily violates our Constitution. Recall his ominous declaration that "I have an Article 2 where I have the right to do whatever I want as president."

Compare what Trump and Sanders do in public office. When there is a conflict between big business and the public good, on labor rights, consumer rights, small taxpayer respect, and environmental protections, Bernie has stood with the people. Bernie has the best Congressional record of fighting corporate abuses. Meanwhile, Trump, really a corporation masquerading as a human being, works to line the pockets of corporate fat cats. Bernie fights for unions, living wages, and workplace safety; Donald hates unions, and has no problem freezing the $7.25 per hour minimum wage and dismantling serious worker health and safety protections.

Bernie is a consumer champion who wants to cancel crushing student loan debt and reverse the dangerous outsourcing of production of medicine to China, leaving us defenseless. Trump is close to shutting down the Consumer Financial Protection Bureau and other consumer safety agencies such as National Highway Traffic Safety Administration. For three years he crazily pushed cuts for health and pandemic research. It took a spreading coronavirus for him to face reality and his response has been too little, too late.

Trump was a corporate welfare king with a failed gambling business who used, in his brazen words, "bankruptcy as a competitive advantage." He's busy shoveling all kinds of subsidies, giveaways, bailouts, and giant tax escapes to profitable big companies, at the expense of smaller taxpayers. Bernie is strongly against most of this corporate "socialism for the rich."

On the environment, Bernie has a good, though not perfect, record. Trump has no problem with deadly corporate pollution -- such as coal ash, mercury, methane, diesel particulates degrading your health. Trump is preventing federal efforts from combating climate disruptions, talks about "clean, beautiful coal," and even forbids the use of the term "climate change" (which he believes is a hoax). Bernie campaigns all over the country talking about public investments in climate preparedness -- paid for by restoration of corporate taxes that Trump would like to further cut. Only by using all available resources can the U.S. contain immensely costly runaway fires, floods, tornadoes, droughts, and already rising sea levels caused by climate disruption.

Bernie releases his tax returns while Trump hides them and gets a major tax cut for his family through Congress.

Donald says he's never done anything wrong and never needs to apologize. Bernie recognizes his mistakes when he is wrong. Donald breaks promises -- on lower drug prices, on cleaner air and water, on more manufacturing jobs, and on expanded health care insurance. Trump has, in fact, actively damaged the environment and hurt these workers and consumers.

Bernie and Trump have superficial similarities. Both rarely smile. Both can be gruff and have trouble taking advice. But Bernie reads, thinks, and empathizes with people who desperately need universal healthcare and endure daily poverty. Frantically tweeting Donald doesn't read or think, and is devoid of empathy, preferring to use his office to enrich Trump family businesses. Instead of spending his time working to understand the problems of working people, thin-skinned Donald spends his time blaming others and viciously nick-naming political opponents.

Related Topic(s): Bernie Sanders; Bernie Sanders 2020; Climate; Trump Against Climate Change; Trump Against Democracy; Trump Bigotry; Trump Broken Promises; Trump Liar; Trump Tax Returns, Add Tags
Add to My Group(s)
Go To Commenting
The views expressed herein are the sole responsibility of the author and do not necessarily reflect those of this website or its editors.