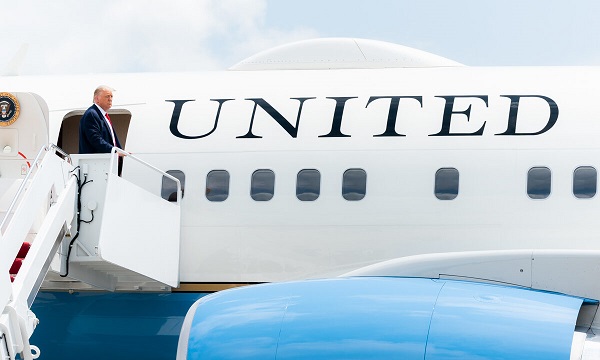 Donald Trump's pathological racism, which he displays every day, has hampered international efforts to stem the spread of COVID-19. Trump's insistence on using terms like the "Chinese flu" or "China flu" to describe COVID-19 is merely designed to stoke tensions with China and, by default, between Trump's racist white nationalist base and Asian-Americans. Worse is Trump's use of the blatantly racist "kung flu" to denote COVID-19.

Trump also calls the deadly 1918 influenza pandemic, which killed Trump's grandfather and some 50 million others around the world, the "1917 Spanish flu." In Trump's drug-addled and sick mind, he has not only altered the year that the 1918 pandemic began but uses the term "Spanish" as yet another dog whistle to his anti-Hispanic base. The 1918 flu did not even start in Spain. The deadly influenza began in the battlefield trenches in France but because of wartime censorship, the first cases of the virus were reported from Spain, a neutral nation not under press censorship controls.

Where the COVID-19 pandemic began is less important than how patient zero was infected to spread the virus to the rest of the world. There is not even any sound scientific proof that COVID-19 began in China. Scientists at the University of Barcelona detected the presence of COVID-19 in frozen samples of Barcelona's sewage water in March 2019, eight months before the virus was first detected in humans in Wuhan, China. The Catalonian scientists published their findings in a report titled, "SARS-CoV-2 detected in wastewater in Barcelona on March 12, 2019."

Italian scientists discovered the presence of COVID-19 in sewage in Milan and Turin on December 18, 2019, before the first infection was reported in Wuhan. The Spanish Society of Virology admitted that some influenza deaths diagnosed as regular influenza by primary care physicians in Spain earlier in 2019 were probably caused instead by COVID-19. Brazilian scientists discovered that SARS-CoV-2 had been circulating in Brazil "since late November 2019, much earlier than the first reported case in the Americas." The Brazilian scientists discovered COVID-19 in sewage samples taken in Florianopolis, Santa Catalina, Brazil. Trump's ally and political doppelganger, Brazilian President Jair Bolsonaro, has also accused China for the spread of COVID-19, a virus he once called a "hoax." As it turns out, Bolsonaro's Brazil may have had cases of the virus a month before China.

The U.S. Centers for Disease Control and Prevention (CDC) reported that some Americans who died from influenza earlier in 2019 may, in fact, have died from COVID-19. The director of the CDC, Dr. Robert Redfield, admitted that some of the influenza deaths in 2019 were "misdiagnosed." The science-averse Trump will not hear of suggestions that COVID-19 could just as well be called the "American flu" rather than the "Chinese flu." That runs counter to Trump's racist political platform.

It is clear that for Trump and his two Nazi-like advisers, Jared Kushner and Stephen Miller, COVID-19 provided an opportunity to conduct a "medical holocaust" never before seen on such a scale in human history. Kushner sequestered, warehoused, and hijacked ventilators and personal protective equipment destined for Democratic states and cities, while Miller figured out the best methods for exposing minorities, including African-Americans, Hispanic-Americans, and Native Americans, to the virus. Miller pressed for in-person voting in primary elections and an end to unemployment assistance, thus forcing minimum wage minority employees back to work and into higher risk of being infected with the virus.

In the current race for a COVID-19 vaccine, some scientists are calling out certain nations for practicing "vaccine nationalism." The same racist and nationalist government leaders who lost valuable time in practicing a blame game for responsibility for the virus now seek to capitalize on a potential vaccine. The politicization of science and medicine proves why politicians should be kept far away from the laboratories and international scientific exchange networks.