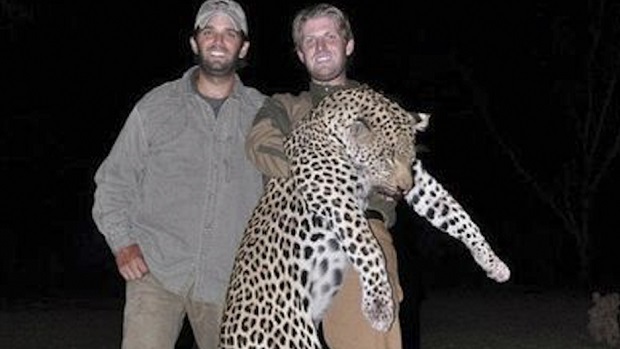 Donald Trump Jr. and Eric Trump are avid trophy hunters as are a number of Trump's wealthier supporters and campaign donors A 2010 photo shows the two proudly posing with a leopard they killed in Zimbabwe
(Image by Public Radio International)   Details   DMCA

Further pushing his cruelty from caged migrant children separated from their families at the southern border to yet other children coming home from school in Mississippi to find their parents having been hauled off by Immigration and Customs Enforcement (ICE) to detention centers, Donald Trump has now turned his attention to needlessly harming animals. Trump is a well-known critic of pet owners, including his own vice president, referring to them as "low class."

In sweeping action meant to gut America's commitment to protecting endangered species at home and abroad, Trump is scaling back two important statutes that protect animals: the Endangered Species Act of 1973 and the U.S. adherence to the 1975 Convention on International Trade in Endangered Species of Wild Fauna and Flora.

The Trump administration is currently lifting restrictions on the importing of parts of African lions and elephants killed by "trophy hunters." Not only are restrictions being lifted on such trophies, but the Interior Department is hampering public access to the records of permits being granted to hunters to import carcass parts of endangered species. The U.S. Fish and Wildlife Service lists lions and elephants as among many endangered species. Donald Trump Jr. and Eric Trump are avid trophy hunters, as are a number of Trump's wealthier supporters and campaign donors. A 2010 photo shows the two proudly posing with a leopard they killed in Zimbabw.

The Trump administration is planning to end blanket protections for animals recently declared endangered. It will also require a cost-benefit analysis to be completed prior to a determination being made to protect a particular species of animal or plant. The changes in the Endangered Species Act may affect 1,600 protected species in the United States and its territories. In May of this year, a United Nations report concluded that 1 million animals and plants face imminent extinction due to climate change and overdevelopment. The UN also stated that the rate of extinctions is increasing at a record percentage.

There are currently moves by conservation groups and at least 10 state attorneys general to launch lawsuits to block Trump's war on endangered animals and plants.

Trump's blood lust for animals does not end with scaling back domestic and international protections for endangered species. The Trump administration is also giving authorization to the Department of Agriculture's Wildlife Service to use M-44 spring-loaded traps filled with sodium cyanide to kill bears, foxes, wolves, coyotes, birds, mountain lions and other animals that ranchers and farmers consider to be pests. Grizzly bears have recently been re-added to the federal endangered species list.

Environmental scientists warn that "cyanide bombs" can kill non-targeted species, including pet dogs and cats, as well as harm humans. In 2017, the USDA imposed a moratorium on the use of M-44s in Idaho after a Pocatello boy walking with his dog triggered one of the devices, causing the family dog "Casey" to die a very violent death [left]. 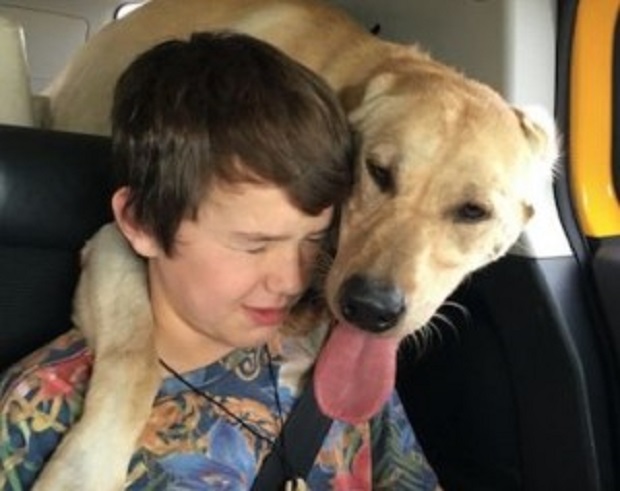 The boy suffered from nausea, vomiting, and coughing with doctors unsure about the long-term effect of the sodium cyanide. The Trump administration's order removes all moratoriums on the use of M-44s, including in Idaho.