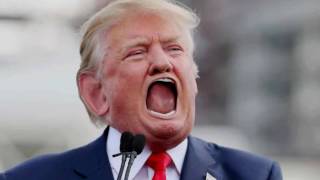 The current crisis in Syria provides Donald Trump with his first genuine test as president and commander-in-chief. On the basis of his first 15 months in the White House, there is no reason to believe that he is equipped to manage a complex geopolitical and military situation that involves a failed Arab state as well as the military and political interests of many non-Arab states such as Russia, Iran, Turkey, and Israel in addition to the United States.

The delayed response to Syria's unconscionable use of chemical weapons against its own people indicates that the U.S. national security bureaucracy as well as such key European allies as the UK, France, and Germany are trying to constrain the president and to limit the damage of greater U.S. involvement.

There is reason to believe that Trump lacks the cognitive ability to deal rationally, let alone successfully, with the complex Syrian situation. Trump's chaotic Twitter outbursts have already warned of "nice and new and 'smart'" weapons; his handling of numerous personnel challenges in the White House; his constant contradictions on issues both foreign and domestic; his fixation with the presidency of Barack Obama and his presidential rival Hillary Clinton offer a pattern of bizarre and impulsive decision making. His bombastic threats over the past year have been a particular worry.

The Syrian situation requires serious cognitive capabilities. The president must analyze and absorb large amounts of factual material, but Trump prefers to shoot from the hip without the benefit of background briefings. His angry and implosive manner will complicate the necessity for calm and reasoned discussion of sensitive political and military matters. His cavalier attitude toward the use of military force points to a reckless and aggressive manner that belies the seriousness of the crisis in the Middle East. He considers himself a "stable genius," but repeatedly displays limited cognitive capabilities.

Trump's manic behavior suggests that the White House and the United States would benefit from having key advisers around him who would be able to govern and moderate his behavior. We've been told that the so-called "adults" in the room have performed that function, although I remain skeptical. In the past month, in any event, we have lost two of those "adults" (Secretary of State Rex Tillerson and national security adviser Lt. Gen. H.R. McMaster) and their replacements (CIA director Mike Pompeo and John Bolton) appear just as impetuous and authoritarian as the president himself. Trump's numerous references to himself as the only one "who can fix it" point to the difficulty of counseling an authoritarian president.

The stress of the investigation of special counsel Robert Mueller adds to the danger of the current situation because President Trump may view the use of military force as buying time in a worsening domestic atmosphere. The fact that he views the Mueller investigation as "an attack on America" also points to his authoritarian style.

Any discussion of the Syrian situation involves a debate over the use of lethal military weaponry against a target where Russian and Iranian forces are deployed. There are few military plans that survive the first round of fighting, but the Syrian situation is particularly complicated in view of the presence of foreign air and air defense forces.

We were lucky in the 1962 Cuban missile crisis because President John F. Kennedy was open to the use of diplomatic tools to solve the crisis, and Soviet leader Nikita Khrushchev was strong enough to reverse himself and withdraw strategic forces that shouldn't have been deployed in the first place. Ultimately, each side did an effective job of assessing the intentions and capabilities of its adversary, which is a fundamental issue in any foreign policy crisis.

There is no reason to believe that Donald Trump is capable of making such assessments, and the presence of too many military advisers and a dearth of diplomatic advisers only complicates the situation. President Kennedy had the advantage of a former U.S. ambassador to the Soviet Union, Llewellyn Thompson, to provide wise counsel and to give Russia the time and space to make a deliberative decision.

President Trump must rely on John Bolton and a hollowed out Department of State that is no position to contribute to a measured and realistic assessment of the problem. Of course, Donald Trump prides himself on not needing intelligence briefings or even intelligent advisers.

Over the past year or so, President Trump has displayed that he has virtually no capability to assess his adversaries at home or abroad. His grandiosity and his indifference to the concerns of others are obstacles to effective decision making. The Syrian crisis is already testing the mettle of his entire national security team. There is genuine reason for concern.

Related Topic(s): Crisis; Syria Attack; Trump Bully In Chief; Trump Idiot-in-chief, Add Tags
Add to My Group(s)
Go To Commenting
The views expressed herein are the sole responsibility of the author and do not necessarily reflect those of this website or its editors.