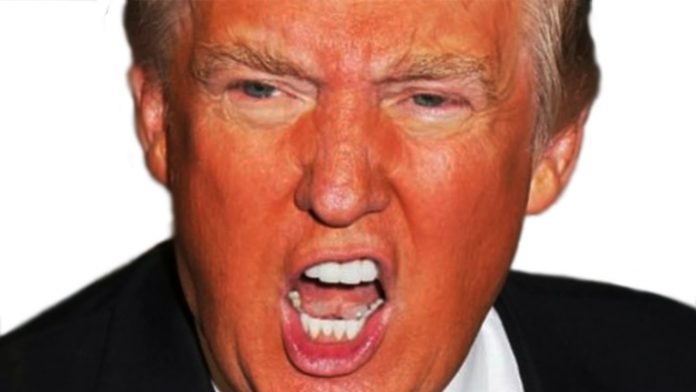 The evidence that Fox News is just a subdivision of the Republican Party (or vice versa) continues to pile up. And the closeness of that relationship has never been stronger than it has during the administration of Donald Trump. Fox News and Trump share a profound intimacy wherein the State TV network will unceasingly defend the President and malign his critics, while he generally sings the praises of his most devoted Trump-fluffers. Leaked emails recently revealed the existence of a literal Propaganda pact between Fox News and Trump.

However, on occasion Trump will have a brief falling out with his PR team at Fox. It usually occurs when a Fox News pundit has the audacity to tell the truth about Trump or to challenge his perceived omnipotence. Foxies like Chris Wallace and Shepard Smith have periodically been victims of Trump's wrath. But his complaints are never based on any identifiable error in content or facts. Trump just lashes out in unhinged tantrums when someone at Fox is not sufficiently worshipful.

That rare moment of independence presented itself recently when Fox News released the results of its latest poll. The numbers were decidedly negative for Trump, including the finding that the top four candidates for the Democratic nomination for president (Biden, Warren, Sanders, and Harris) handily beat Trump in 2020 general election match ups. Trump never even broke 40 percent. The poll's respondents also gave a much higher favorability rating to the Democratic Party (51/45), than the Republican Party (41/54), which they rated as significantly unfavorable. And in a searing rebuke of Trump's assessment of his own ability to unify the nation, 59 percent of voters said that he is "tearing the country apart."

Predictably, Trump went bonkers at Fox daring to deflate his messianic self-image. And he frantically unloaded his outrage during another episode of his "Chopper Talk" reality show that has replaced White House press briefings. It was a jaw-dropping spectacle that confirmed that Trump regards Fox News as an affiliate of the White House that must always be obedient to his demands (video below). He began...

"Fox is a lot different than it used to be, I can tell you that. [...] Fox has changed. And my worst polls have always been from Fox. There's something going on with Fox, I'll tell you right now. And I'm not happy about it. I don't know what's happening with when they have a Juan Williams who's never said a positive thing. And yet when I show up at the Fox building he's out there, 'Oh sir, can I have a picture with you? Can I have a picture?' He's 100 percent nice."

First of all, Trump has complained before about Fox News polls that he says "have always been terrible to me." However, this collection of his own tweets proves that Fox's polling has often been favorable to him, and he knows it. And it's interesting that he considers that Juan Williams being polite somehow makes him a hypocrite. That actually tells you something about Trump's boorish and infantile personality. Then he continued...

"Fox is different, there's no question about it. And I think they're making a big mistake because Fox was treated very badly by the Democrats. Very, very badly. Having to do with the debates and other things. I think Fox is making a big mistake because, you know, I'm the one who calls the shots on the really big debates. I guess we're probably planning on three of them. And I'm not happy with Fox. I'm certainly happy, I think, Sean Hannity and Lou Dobbs. I think Tucker Carlson and Laura, Jesse Watters and Jeanine. We have a lot of great people."

Trump is unambiguously threatening Fox News here. He's saying that if they don't start delivering more favorable polling results he might just prohibit them from hosting election debates. He believes that Fox's polls should not be honest, representative samples of the electorate but, instead, should be aligned with the views of his favorite shills (Hannity, Dobbs, Carlson, etc.) And if they aren't, then Fox will be punished. Also, his assertion that "WE" have a lot of great people, is a clear indication that in his mind Fox News is part of his regime. TrumpenFox is a monstrous creation that crossbreeds news and politics.

This would be a good time to point out that Trump's assertion that he "calls the shots" is bullshit. The apolitical, independent Commission on Presidential Debates has sponsored general election presidential debates in every election since 1988. So unless Trump intends to unilaterally rescind that process, he won't be deciding which networks host the debates.

Of course, given his recklessness and ignorance, Trump just might try to nix the Commission and impose his own terms for debate. That, however, wouldn't go down well with the Democratic nominee who likely oppose any such move. And if the debates are canceled as a result, it would just make Trump look petty, stubborn, childish, and most of all, scared. Which is unquestionably the true state of his diseased psyche, considering his utter failure to deliver on his campaign promises, and the teetering state of the economy. The American people would see in real time that the Donald Trump who dodged the draft is the same coward dodging the debates.

Related Topic(s): Polls; Trump Anger; Trump Attacks Fox News; Trump Bully In Chief, Add Tags
Add to My Group(s)
Go To Commenting
The views expressed herein are the sole responsibility of the author and do not necessarily reflect those of this website or its editors.