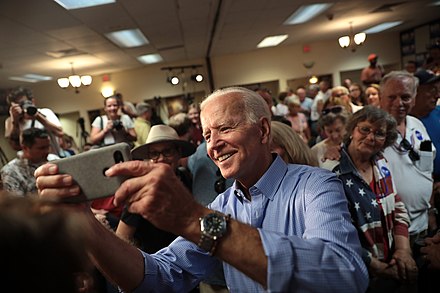 When Joe Biden told an audience that Mike Pence "is a decent guy," Pence had already been vice president for more than two years. After the comment drew fierce criticism, Biden responded that he'd said it "in a foreign policy context" an odd effort at damage control, given that Pence has publicly backed every one of President Trump's countless abhorrent policies, whether foreign or domestic.

Now, with impeachment in the air and the remote but real possibility that Trump might not end up running for re-election, Biden's attitude toward Pence and Republicans overall should get a closer look.

That he could call Pence "a decent guy" after loyally serving as Trump's highest-ranking henchman illuminates a lot about Biden's style and substance. His praise of Pence's purported decency was not atypical. Biden has long praised racist Republican senators and defended his past collaborations with them.

And Biden has been effusive in expressing warmth toward the notorious man who preceded him as vice president. "I really like Dick Cheney for real," Biden said while speaking at George Washington University in October 2015. "I get on with him, I think he's a decent man."

Such statements speak volumes about Biden's standards of decency and about his suitability to be the Democratic presidential nominee. At a time when elected Republicans in Washington have amply shown themselves to be depraved sycophants to Trump no matter how viciously vile and deadly his policies, Biden still wants to pretend that those GOP stalwarts can be brought into the fold of democratic civility, from the current vice president on down.

Insisting that "history will treat this administration's time as an aberration," Biden contended during a campaign swing in Iowa a few months ago: "This is not the Republican Party." He went on to cite his bonds with "my Republican friends in the House and Senate."

The latest polling tells us that Biden should no longer be called the "front-runner" for the nomination. (Elizabeth Warren's numbers are now at least as strong.) On Wednesday, Politico pointed out: "Biden's descent has been months in the making, the result of continuous fire from progressives, questions about his age and stamina, a drumbeat of negative coverage over lackluster debate performances and frequent misstatements, according to pollsters and party insiders."

But Biden still has plenty of aces in the hole, including corporate media outlets that go easy on him and wealthy donors who lavish high-dollar fundraisers on him to shore up a largely AstroTurf campaign. There's a big market among mainstream political journalists and Wall Street types for the reach-across-the-aisle blather that Biden supplies.

Biden's praise for Pence has a perverse logic. "His pitch is that with Trump gone, things and Republicans will return to 'normal,'" CNN pundit Chris Cillizza wrote. When Biden spoke to a gathering of lobbyists and donors in early summer, he sounded an upbeat note about the basic character of Republican leaders. "With Trump gone you're going to begin to see things change," Biden said. "Because these folks know better. They know this isn't what they're supposed to be doing."

Biden is campaigning with the central claim that he's the most qualified candidate to restore bipartisan cooperation after defeating Trump. As if Republicans should be wooed more than fought, Biden likes to portray typical GOP leaders as honorable, a pretense that is in harmony with calling Mike Pence "a decent guy" regardless of his absolutely despicable record.

Biden apparently views that approach as helpful to winning the White House. And it's certainly in sync with Biden's own record of teaming up with Republicans. But whether progressives support Bernie Sanders (as I do) or Elizabeth Warren or one of the other candidates, it's essential to recognize and avert the dangers posed by the Biden for President campaign.

Progressives often feel that they're on the outside of electoral politics, looking in. Corporate news media routinely reinforce that impression, treating progressive activism as invisible or inconsequential. But Politico's latest assessment that Biden's steep fall in the polls is partly due to "continuous fire from progressives" tells us something important.

Related Topic(s): Joe Biden; Politico; Vice President Mike Pence, Add Tags
Add to My Group(s)
Go To Commenting
The views expressed herein are the sole responsibility of the author and do not necessarily reflect those of this website or its editors.