Click Here to Remove All Ads
Source: The Guardian
Unlike the US government's vindictive behaviour, Pfc Manning's expressions of regret are of a piece with his moral earnestness 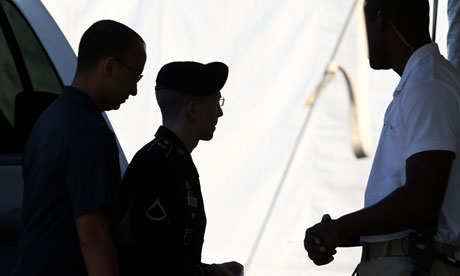 Pfc Bradley Manning, the American soldier responsible for transmitting hundreds of thousands of diplomatic cables and US army reports to WikiLeaks, took the stand Wednesday during the sentencing phase of his trial to apologize to the presiding military judge, Col Denise Lind. His three-minute unsworn statement was delivered before defense rested its case.

In July, Manning was convicted of 20 offenses. He currently faces a maximum punishment of 90 years. Manning said Wednesday:

Because much of the 19-month trial has been conducted without a public record of court documents until the 1,103rd day of the legal proceeding, many might be surprised to learn that Manning's statement on Wednesday is consistent with others he has made in court.

Many readers are familiar with excerpts from a 20-page statement Manning read at a February hearing, where he pled to nine "lesser included offenses" of the Espionage Act and one failure to obey a lawful regulation for wrongly storing classified material. In that statement, Manning explained his motive for releasing charged information, including a video of a July 2007 US airstrike in Baghdad, Iraq, which killed two Reuters journalists, at least 12 civilians, and injured two children.

In his statement, Manning described the conduct of the Apache pilots as dehumanizing and "similar to a child torturing ants with a magnifying glass." Audio of him delivering his statement was later leaked and published by the Freedom of the Press Foundation.

In addition to the 20-page statement at the February Providence Inquiry, however, were lengthy colloquies he had with the judge about the nature of his admitted conduct.

It is important to note that Manning's unsworn statement on Wednesday did not say that he "harmed" the US. While much of the sentencing hearing has been conducted in closed session away from public scrutiny. In open sessions, prosecution witnesses have testified that no actual damage occurred and no deaths resulted from Manning's leaks. During the sentencing phase, prosecutors have presented evidence of government mitigation efforts and "expert" opinion testimony by federal employees and contractors that the leaks impacted diplomatic reporting, relationships with foreign governments, and could possibly be used in the future propaganda efforts by al-Qaida.

Explaining his guilt to nine offenses of discrediting the service in February, Manning said:

"[T]he public sees that these documents have been released and then it damages their perception and their feeling about whether the armed services as a whole can safeguard information at all."

"I did not truly appreciate the broader effects of my actions. Those effects are clearer to me now through both self-reflection during my confinement in its various forms and through the merits and sentencing testimony that I have seen here. I look back at my decisions and wonder, 'How on earth could I, a junior analyst, possibly believe I could change the world for the better over the decisions of those with the proper authority?'"

Explaining his February plea to nine offenses of prejudice to good order and discipline, Manning said:

"In the military, we have rules and regulations and structures designed to safeguard sensitive information, whether it be classified or unclassified; and I circumvented those ... I'm not the right pay-grade to make these decisions or anything."

"In retrospect, I should have worked more aggressively inside the system as we discussed during the Providence Statement and had options and I should have used these options."

Alexa O'Brien is a writer for WikiLeaks Central (wlcentral.org). She can be found on Twitter @carwinb
Related Topic(s): Bradley Manning; Bradley Manning Trial; Truth, Add Tags
Add to My Group(s)
Go To Commenting
The views expressed herein are the sole responsibility of the author and do not necessarily reflect those of this website or its editors.