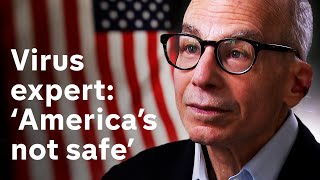 As he has every reason to be.

Science magazine is one of the world's preeminent scientific magazines, a weekly publication dedicated to groundbreaking short articles in every field of the natural and applied sciences. It is published in Washington, DC, by the American Association for the Advancement of Science.

Whatever their natural inclinations, scientists are careful about public political expressions. As a rule, they are dependent on state money and political cooperation between countries, and they have learned to be tactful. Everyone has their limit, though. And so the Editor-in-Chief of Science, Holden Thorp, has written an editorial, entitled Do us a favor. His audience is practicing scientists, but its language is clear to everyone. It is freely accessible here. Excerpts:

"Do me a favor, speed it up, speed it up." This is what U.S. President Donald Trump told the National Association of Counties Legislative Conference, recounting what he said to pharmaceutical executives about the progress toward a vaccine for [...] the virus that causes coronavirus disease 2019 (COVID-19). Anthony Fauci, the long-time leader of the National Institute of Allergy and Infectious Diseases, has been telling the president repeatedly that developing the vaccine will take at least a year and a half -- the same message conveyed by pharmaceutical executives. Apparently, Trump thought that simply repeating his request would change the outcome.

The administration has repeatedly said -- as it did last week -- that virus spread in the United States is contained, when it is clear from genomic evidence that community spread is occurring in Washington state and beyond. That kind of distortion and denial is dangerous and almost certainly contributed to the federal government's sluggish response. After three years of debating whether the words of this administration matter, the words are now clearly a matter of life and death.

A vaccine has to have a fundamental scientific basis. It has to be manufacturable. It has to be safe. This could take a year and a half -- or much longer. Pharmaceutical executives have every incentive to get there quickly -- they will be selling the vaccine after all -- but thankfully, they also know that you can't break the laws of nature to get there.

Maybe we should be happy. Three years ago, the president declared his skepticism of vaccines and tried to launch an anti-vaccine task force. Now he suddenly loves vaccines.

But do us a favor, Mr. President. If you want something, start treating science and its principles with respect.

Related Topic(s): Science News; Scientists; Trump; Vaccines, Add Tags
Add to My Group(s)
Go To Commenting
The views expressed herein are the sole responsibility of the author and do not necessarily reflect those of this website or its editors.