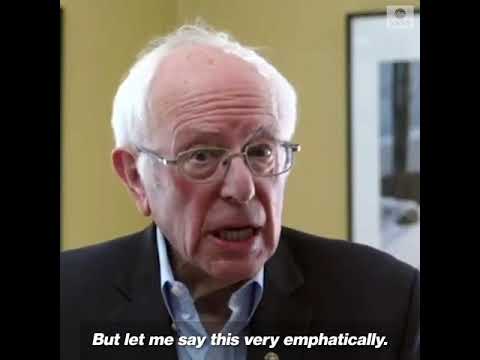 I want to express to each of you my deep gratitude for helping to create an unprecedented grassroots political campaign that has had a profound impact in changing our nation.

I want to thank the hundreds of thousands of volunteers who knocked on millions of doors in the freezing winters of Iowa and New Hampshire and in the heat of Nevada and South Carolina and in states throughout the country.

I want to thank the 2.1 million Americans who have contributed to our campaign and showed the world that we can take on a corrupt campaign finance system and run a major presidential campaign without being dependent upon the wealthy and the powerful. Thank you for your 10 million contributions averaging $18.50 per donation.

I want to thank those who phone banked for our campaign and those of you who came together to send out millions of texts. I want to thank the many hundreds of thousands of Americans who attended our rallies, town meetings and house parties from New York to Los Angeles. Some of these events had over 25,000 people. Some had a few hundred and some had a dozen. But all were important. Let me thank those who made these many events possible.

I want to thank our surrogates, too many to name. I can't imagine that any candidate has ever been blessed with a stronger and more dedicated group of people who have taken our message to every corner of the country. And I want to thank all those who made music and art an integral part of our campaign.

I want to thank all of you who spoke to your friends and neighbors, posted on social media and worked as hard as you could to make this a better country.

Together, we have transformed American consciousness as to what kind of country we can become, and have taken this country a major step forward in the never-ending struggle for economic justice, social justice, racial justice and environmental justice.

I also want to thank the many hundreds of people on our campaign staff. You were willing to move from one state to another and do all the work that had to be done no job was too big or too small for you. You rolled up your sleeves and you did it. You embodied the words that are at the core of our movement: Not me, us. And I thank each and every one of you.

We Have Won The Ideological Battle

As many of you will recall Nelson Mandela, one of the great freedom fighters in modern world history, famously said; "It always seems impossible until it is done." And what he meant by that is that the greatest obstacle to real social change has everything to do with the power of the corporate and political establishment to limit our vision as to what is possible and what we are entitled to as human beings.

If we don't believe that we are entitled to health care as a human right, we will never achieve universal health care.

If we don't believe that we are entitled to decent wages and working conditions, millions of us will continue to live in poverty.

If we don't believe that we are entitled to live in a world that has a clean environment and is not ravaged by climate change, we will continue to see more drought, floods, rising sea levels and an increasingly uninhabitable planet.

If we don't believe that we are entitled to live in a world of justice, democracy and fairness without racism, sexism, homophobia, xenophobia or religious bigotry we will continue to have massive income and wealth inequality, prejudice and hatred, mass incarceration, terrified immigrants and hundreds of thousands of Americans sleeping out on the streets of the richest country on earth.

Related Topic(s): Bernie Sanders; Campaign Related; Campaign Resignation; Campaign Strategies Skills Techniques, Add Tags
Add to My Group(s)
Go To Commenting
The views expressed herein are the sole responsibility of the author and do not necessarily reflect those of this website or its editors.