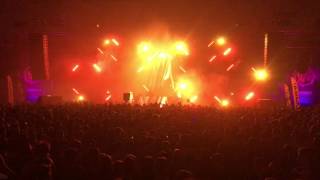 There are good reasons for any good progressive to bemoan the presence of the childish, racist, sexist and ecocidal, right-wing plutocrat Donald Trump in the White House. One complaint about Trump that should be held at arm's-length by anyone on the left, however, is the charge that Trump is contributing to the decline of U.S. global power -- to the erosion of the United States' superpower status and the emergence of a more multipolar world.

But it isn't just the right wing that writes and speaks in such terms about how Trump is contributing to the decline of U.S. hegemony. A recent Time magazine reflection by the liberal commentator Karl Vick (who wrote in strongly supportive terms about the giant January 2017 Women's March against Trump) frets that that Trump's "America First" and authoritarian views have the world "looking for leadership elsewhere."

"Could this be it?" Vick asks. "Might the American Century actually clock out at just 72 years, from 1945 to 2017? No longer than Louis XIV ruled France? Only 36 months more than the Soviet Union lasted, after all that bother?"

I recently reviewed a manuscript on the rise of Trump written by a left-liberal American sociologist. Near the end of this forthcoming and mostly excellent and instructive volume, the author finds it "worrisome" that other nations see the U.S. "abdicating its role as the world's leading policeman" under Trump--and that, "given what we have seen so far from the [Trump] administration, U.S. hegemony appears to be on shakier ground than it has been in a long time."

For the purposes of this report, I'll leave aside the matter of whether Trump is, in fact, speeding the decline of U.S. global power (he undoubtedly is) and how he's doing that to focus instead on a very different question: What would be so awful about the end of "the American Era" -- the seven-plus decades of U.S. global economic and related military supremacy between 1945 and the present? Why should the world mourn the "premature" end of the "American Century"?

It would be interesting to see a reliable opinion poll on how the politically cognizant portion of the 94 percent of humanity that lives outside the U.S. would feel about the end of U.S. global dominance. My guess is that Uncle Sam's weakening would be just fine with most Earth residents who pay attention to world events.

According to a global survey of 66,000 people conducted across 68 countries by the Worldwide Independent Network of Market Research (WINMR) and Gallup International at the end of 2013, Earth's people see the United States as the leading threat to peace on the planet. The U.S. was voted top threat by a wide margin.

There is nothing surprising about that vote for anyone who honestly examines the history of "U.S. foreign affairs," to use a common elite euphemism for American imperialism. Still, by far and away world history's most extensive empire, the U.S., has at least 800 military bases spread across more than 80 foreign countries and "troops or other military personnel in about 160 foreign countries and territories." The U.S. accounts for more than 40 percent of the planet's military spending and has more than 5,500 strategic nuclear weapons, enough to blow the world up 5 to 50 times over. Last year it increased its "defense" (military empire) spending, which was already three times higher than China's, and nine times higher than Russia's.

Think it's all in place to ensure peace and democracy the world over, in accord with the standard boilerplate rhetoric of U.S. presidents, diplomats and senators?

Do you know any other good jokes?

A Pentagon study released last summer laments the emergence of a planet on which the U.S. no longer controls events. Titled "At Our Own Peril: DoD Risk Assessment in a Post-Primary World," the study warns that competing powers "seek a new distribution of power and authority commensurate with their emergence as legitimate rivals to U.S. dominance" in an increasingly multipolar world. China, Russia and smaller players like Iran and North Korea have dared to "engage," the Pentagon study reports, "in a deliberate program to demonstrate the limits of U.S. authority, reach influence and impact." What chutzpah! This is a problem, the report argues, because the endangered U.S.-managed world order was "favorable" to the interests of U.S. and allied U.S. states and U.S.-based transnational corporations.

Any serious efforts to redesign the international status quo so that it favors any other states or people is portrayed in the report as a threat to U.S. interests. To prevent any terrible drifts of the world system away from U.S. control, the report argues, the U.S. and its imperial partners (chiefly its European NATO partners) must maintain and expand "unimpeded access to the air, sea, space, cyberspace, and the electromagnetic spectrum in order to underwrite their security and prosperity." The report recommends a significant expansion of U.S. military power. The U.S. must maintain "military advantage" over all other states and actors to "preserve maximum freedom of action" and thereby "allow U.S. decision-makers the opportunity to dictate or hold significant sway over outcomes in international disputes," with the "implied promise of unacceptable consequences" for those who defy U.S. wishes."

"America First" is an understatement here. The underlying premise is that Uncle Sam owns the world and reserves the right to bomb the hell out of anyone who doesn't agree with that (to quote President George H.W. Bush after the first Gulf War in 1991: "What we say goes."

Paul Street (www.paulstreet.org and paulstreet99@yahoo.com) is the author of Empire and Inequality: America and the World Since 9/11 (2004), Racial Oppression in the Global Metropolis (2007), Barack Obama and the Future of American Politics (more...)
Related Topic(s): Bombing; Decline; Hegemony; International; Killing; Military; Threat; World Issues, Add Tags
Add to My Group(s)
Go To Commenting
The views expressed herein are the sole responsibility of the author and do not necessarily reflect those of this website or its editors.