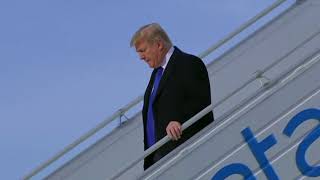 America's political authoritarianism comes in different, yet combined, mutually reinforcing forms. We have the neofascist authoritarianism of the white nationalist Republican Party, its Great Dog-Wagging God in the White House and his cultish, white-Amerikaner base.

Donald Trump may well not leave the White House without a dangerous fight if he is bested in the Electoral College in November. In his book titled "A Warning," the senior Trump administration official known only as "Anonymous" cites a "worry for our republic " if Trump is removed from office -- by impeachment or a narrow defeat in the ballot box ... Trump will not exit quietly -- or easily." The author continues: "It is why at many turns he suggests 'coups' are afoot and a 'civil war' is in the offing. He is already seeding the narrative for his followers -- a narrative that could end tragically."

Indeed. An angry old white male Trumpist outside one of the president's recurrent hate rallies on Dec. 10 told a New York Times reporter that he'd respond to his hero's removal with "my .357 Magnum." One week later, another Caucasian in Arizona pointed to a pistol he was wearing and told the Times that he'd been "stockpiling weapons, in case Mr. Trump's re-election is not successful" and said that Trump's defeat would mean "a civil war."

The Trumpenvolk can probably keep their weapons holstered. Removal through impeachment is unlikely, given the fact that the Senate is held down by a Republican majority whose leaders are mocking constitutional checks and balances by working hand in glove with the president to craft a Senate trial certain to exonerate the truth-trashing Trump for his Ukraine-gate transgression. So what if he set the Founding Fathers' wigs on fire and violated federal law (the Impoundment Control Act) by leveraging congressionally approved military funding to a U.S. ally in order to obtain dirt to use against a potential political rival? The game is rigged in the absurdly apportioned Senate, where super-white and Republican Wyoming, home to 578,720 people, claims the same number of senators (two) as ethnically and racially diverse and Democratic California, home to 39 million.

Trump may win the 2020 election. If that happens, it would be due in no small part to another key form of American political authoritarianism -- the centrist, corporate-financial and imperial neoliberalism fueling the Democratic Party and most of the corporate media. The "inauthentic opposition" Party of Fake Resistance's (PFR's) -- leading funders, operatives and media -- would rather lose to the evermore fascist, right-wing GOP than to the leftish Bernie Sanders wing of their own party. So what if only Sanders can mobilize the voters required to defeat Trump, the wannabe president for life?

Meanwhile, the media more closely aligned with Democrats does everything it can to ignore and demean the Sanders candidacy, failing to cover his rallies and dismissing his platform and "electability." The Democratic establishment and loyal media outlets refuse to respectfully transmit and take seriously his strong critique of American class inequality and plutocracy. Nor does it highlight his urgent calls for action to confront capitalogenic climate change before the planet is cooked beyond repair. The elite Democrats and their many media allies also smear Sanders' popular call for single-payer health insurance, declaring it "too radical," "too expensive" and -- to use the contemptuous language of Amy Klobuchar -- a "pipe dream" hopelessly untethered from the real world here on earth.

In the distorting hall of mirrors that is the corporate-managed, Democratic, center-left media and politics culture, single-payer isn't a great social-democratic victory that would embed health care as a human right while dramatically reducing health care costs, improving ordinary Americans' health and instilling new democratic space in the United States. No, "Medicare for All" is absurdly portrayed by mainstream Democratic politics and media as an overly expensive assault on the population's existing health insurance plans. Never mind the ridiculously inflated cost and woefully poor performance of the U.S. health care system under the rule of private, for-profit corporations, with their giant and parasitic administrative and marketing costs.

The supposedly liberal media recently has engaged in a vicious effort to smear Sanders as a sexist by spreading the story that he told Massachusetts Sen. Elizabeth Warren that her gender prevents her from winning the 2020 election. The claim came from Warren herself, via CNN, in a cold-blooded move to revive her flagging campaign by playing the sexism card.

The hit job was absurd on its face. Sanders deferred to Warren in 2015 and 2016, agreeing to run for president only after Warren declined to pursue the Democratic nomination. Sanders has long advocated for women's rights and backed female candidates. He embraces the progressive Latina Congresswoman Alexandra Ocasio-Cortez (AOC) as a prized ally and campaign surrogate. AOC and two other progressive and feminist congresswomen of color, Ilhan Omar and Rashida Tlaib, are campaigning for Sanders.

"Liberal" CNN likely promoted Warren's attack on Sanders with three purposes in mind: to drive viewer interest in the last televised and CNN-sponsored Democratic presidential debate before the Iowa caucus; to diminish Sanders' appeal to female voters; and to widen divisions between and among progressive Democrats.

Just before the debate in Des Moines last week, CNN ran a story absurdly depicting Sanders as a misogynist. Then, during the debate, CNN moderator Abby Phillip threw this loaded question at him: "Sen. Sanders, CNN reported yesterday, and Sen. Warren confirmed in a statement [as if the episode wasn't initiated by the Warren campaign] that in 2018 you told her that you did not believe a woman could win the election. Why did you say that?"

Paul Street (www.paulstreet.org and paulstreet99@yahoo.com) is the author of Empire and Inequality: America and the World Since 9/11 (2004), Racial Oppression in the Global Metropolis (2007), Barack Obama and the Future of American Politics (more...)
Related Topic(s): Bernie Sanders; Coup; Democrats; Election; Elizabeth Warren; Media; Trump Anger; Trump Attacks Democrats; Trump Campaign; Women, Add Tags
Add to My Group(s)
Go To Commenting
The views expressed herein are the sole responsibility of the author and do not necessarily reflect those of this website or its editors.