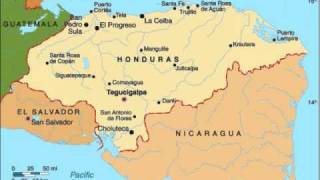 The latest tragedy of misguided U.S. foreign policy in Central America is the tacit support for another stolen presidential election in Honduras. The new right-wing renegade government there is inflicting terrible violence upon people who refuse to accept the election results from Last November's election between extreme right-wing parliamentary dictator, Juan Orlando Hernandez, the current president, and progressive reformer, Salvador Nasralla.

To get a clearer picture as to what is happening on the ground in Honduras -- which includes dozens of murders of street activists -- I spoke to Sandra Cuffe. Based in Tegucigalpa, Honduras, Cuffe has resided for many years in Central America and writes for several online publications.

Cuffe also expressed deep concern for the safety of Edwin Espinal, a noted activist and ally to many movements in Honduras, including COPINH. COPINH is the group founded by the late Berta Caceres, who it is believed was assassinated by right-wing forces affiliated with the Honduran government. Espinal has now been arrested and is being held under difficult circumstances at a Honduran military base.

"The current government has arrested, beaten Espinal many times," said one friend and co-worker of Espinal. "His body has been beaten and broken repeatedly. Now he is a political prisoner, held in leg chains, for having exercised his right to free speech and free assembly."

I spoke to Cuffe on January 24 in Tegucigalpa, Honduras.

Dennis Bernstein: Could you remind people what happened in terms of recent elections in Honduras, and give us a sense of the atmospheric pressure right now?

Sandra Cuffe: Last November 26 there were general elections in Honduras. It was a fiercely contested election between Juan Orlando Hernandez, the current president, and Salvador Nasralla, who was the candidate for the oppositional alliance against the dictatorship.

According to the Honduran constitution, re-election for the office of president is not allowed but the right wing has been concentrating power to the point where the executive branch controls basically all branches of government and a supreme court ruling allowed for the president's re-election.

On the other side, the Libre Party grew out of resistance to the 2009 coup d'etat that was supported by the United States. For these elections, it formed an alliance with a smaller party, as well as with Salvador Nasralla.

After more than half the votes had been counted, preliminary results had Nasralla in the lead by five points, which was considered irreversible. The computer system then mysteriously crashed and when it came back online that lead began to rapidly disappear.

That was the earliest indication that fraud was involved. The official results took another few weeks to come out. The Organization of American States found serious irregularities in the voting and numerous indications of fraud.

Meanwhile, there were massive protests and all kinds of actions going on across the country. At least 35 people have been killed, with the actual number being probably much higher. Most were killed when security forces opened fire on protests around the country. Hundreds have been wounded and well over a thousand have been detained. Many have been released but some are still being held as political prisoners. The inauguration is set for January 27 so we are now in the middle of a week of action leading up to that.

DB: Please say a little more about what is at stake here and why people are willing to put their lives on the line.

SC: What is at stake is democracy. Since the 2009 coup, people have organized, formed political parties and alliances. A lot of people who hadn't been politically active before are now starting to take action in an attempt to change what is going on.

Related Topic(s): Election Theft; Elections; Honduras; Protest; Repression, Add Tags
Add to My Group(s)
Go To Commenting
The views expressed herein are the sole responsibility of the author and do not necessarily reflect those of this website or its editors.