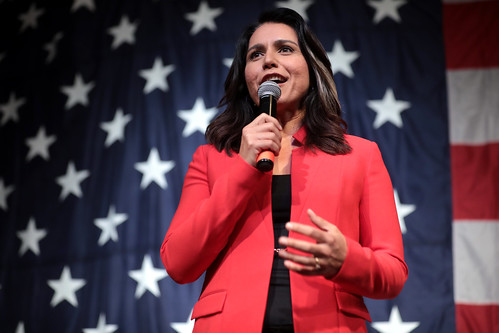 The 2020 Democratic Presidential campaign isn't going as planned as their primary candidates are proving to be nothing more than the order-takers they were intended to be and their bought and paid for media propagandists are losing a grip on keeping Joe Biden semi-significant at best.

Their prime candidate, Kamala Harris, came on strong initially primarily as a result of the media's hype, but it only took three minutes of Tulsi Gabbard's time in the second debate to show Harris as nothing more than a shill as she was unable to defend herself without her handlers telling her what to say. Even then she came off extremely weak, while not defending herself but, rather, doing nothing more than shooting lies and innuendos at Gabbard. Of course, with many of her handlers being the same as those in Hillary Clinton's debacle of 2016 one knows the cause of why Harris's campaign is dead.

Next up for the Deep State came the chameleon Elizabeth Warren. Warren, too, came on initially as she was disguising herself as a Bernie Sander lite and as a result she was scoring high in the polls. When Harris went down the media began their attempts to build Warren who proved she would take orders in order to further her political career. The heightened exposure, however, proved "I have a plan" Warren very unworthy of being able to handle the duties of President, even if all she had to do was follow orders. Her inability to think on her feet did her in and proved to be a potential danger to those giving the orders.

We now have Pete Buttigieg who has proven to take orders from those with the dollars as mayor of South Bend, Indiana. Having been indoctrinated by the Tavistock Institute, as part of the Rhodes Scholar program, he has become well versed in deceptive techniques as had fellow Rhodes alum, Bill Clinton. The more that is learned of Buttigieg the more it becomes obvious he is better suited as a used car salesman than President or any other position which serves the people. He, like Clinton and Obama, is proving to be nothing but a smooth-talking politician whose words don't hold up to the truth.

Presently, the Deep State is represented in person by Tom Steyer who is coming on as simply an ultra-wealthy individual but is at the table in making the agenda the puppet in the White House is to follow. While Steyer has been lagging in the contrived polls he does appear to be gaining as of late as he has been pouring dollars into campaign ads, but not much exposure is being given him by the media as it may be prudent to not have the public learn too much about him.

As a "just in case" measure Michael Bloomberg has announced he is entering the campaign, but will not take part in the early stages. This is possibly to see whether the people get taken in by the bs spewed by Buttigieg who IMHO has become the Deep State's prime subject, or if they identify him for the phony he actually is. It also eliminates time to fully vet Bloomberg so he can slip in pretty unscathed.

As a final ace in the hole should all of the propaganda actually fail and Bernie Sanders continues to gain traction and Obama and the other negative forces are unable to derail his campaign, the Deep State has the Queen of warmongers Hillary Clinton set to invade the second vote at the Democratic Convention. The Deep State at that point in time would be so desperate they would actually choose a proven loser to be their candidate rather than someone like Sanders, Gabbard, or Yang who they feel would not take their orders.

If it got to that level they would prefer having another four years of Trump who has semi-followed their script by continuing the endless wars and killing innocent civilians (see #9). He is also doing a good job of demoralizing the citizens, which is a major part of the Deep State agenda.

The reality, for the sake of our nation's survival, is for the people to come together in mass to elect any of the three: Bernie Sanders, Tulsi Gabbard, or Andrew Yang, who are being smeared and/or silenced by the media propagandists. This alone ought to yell at the voting public what it needs to do in their own best interest. We'll see how dumbed down we have become.

Related Topic(s): 2020 Presidential Primary Election; Michael Bloomberg; Obama; Presidential Cnadidates; State Corruption; Trump; Warmongers, Add Tags
Add to My Group(s)
Go To Commenting
The views expressed herein are the sole responsibility of the author and do not necessarily reflect those of this website or its editors.

The United States Bullies are at it Again.

Stripping Democracy One Bill At A Time, the ALEC Way