Being the continuation of Preface to the book in my, Steven Jonas', voice, Part 1 of which was published on OpEdNews on March 8, 2018, and Part 2 of which was published on March 20, 2018. This is the last installment of this very lengthy Preface. Readers may (or may not) recall that this Preface is written in my, Steven Jonas', voice. The balance of the book, beginning with the next installment, is written in the voice of the putative author, "Jonathan Westminster," who published his political history of the Fascist Era in the United States on the projected 25th Anniversary of the Restoration of Constitutional Democracy to the United States in 2048. I (Steven Jonas) will remind readers once again that I wrote this book in 1994-95. The first version was published in 1996. The third version (NOT a third edition, for it retains virtually all of the original text) was published in 2013: The 15% Solution: How the Republican Religious Right Took Control of the U.S. 1981-2022: A Futuristic Novel: click here

VI. Other Republicans and the "Supremacy of God"

As it happens, these references to "God" and his/her/its influence on the affairs of state are not confined to major Republican candidates for their party's nomination for the Presidency in 2012. For example, in 1996 Patrick Buchanan said: "We're on the verge of taking [the Republican Party] back as prelude to taking back our country as prelude to taking back the destiny of America, and when we get there, my friends, we will be obedient to one sovereign America and that is the sovereign of God himself" (26). But that's Pat Buchanan. Is there a higher authority on the role of the Higher Authority? 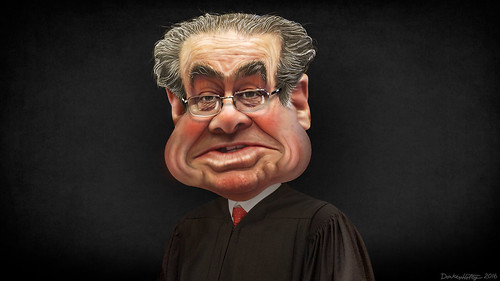 How about one of George W. Bush's two favorite Supreme Court Justices, Antonin Scalia, considered by many to be the representative exemplar for the Republican Religious Right? Beginning with a quote from St. Paul as his thoughts are represented in the New Testament, Scalia had this to say about the subject (27):

"'For there is no power but of God [St. Paul is said to have said]; the powers that be are ordained of God. . . . The Lord repaid --- did justice --- through his minister, the state. . . .' "[This was the consensus] of Christian or religious thought regarding the powers of the state. . . . That consensus has been upset, I think, by the emergence of democracy. . . . The reaction of people of faith to this tendency of democracy to obscure the divine authority behind government should not be resignation to it, but the resolution to combat it as effectively as possible [emphasis added]."

Justice Scalia is still fighting the dyed-in-the-wool religionists' battle against The Enlightenment which, ironically enough, was the inspiration of the Founding Fathers of the United States. Further, Scalia has said on more than one occasion that he thinks that there is some divine "authority" standing above the Constitution (28). His soul mate Clarence Thomas does too. Scalia could have written this book's "33rd Amendment" himself.

Of course, there is no mention of such an authority, God or otherwise, standing above its precepts and proscripts in the Constitution itself, and it was written by the Founding Fathers to be the supreme law of the land. But Scalia is in a position to interpret the document and say "what it really means." So much for the Doctrine of Original Intent. Too bad I didn't have the above quote from Scalia at the time I wrote the book. I would have made it the rallying cry of the Republican-Christian Alliance as they proceed to use the Constitutional amendment process to destroy the Constitution and convert the United States into a "Christian Nation."

Finally on this point, like Mitt Romney, Pres. George W. Bush has been quoted as claiming something that Jefferson Davis Hague never does, even at the height of his powers: that he acts under the direct instructions of God. The quote came from what the leading Israeli daily Haaretz (29) stated was the transcript of the conversation of a meeting between Bush and the Prime Ministers of Israel and the Palestinian Authority, Ariel Sharon and Mahmoud Abbas on June 25, 2003. No denial of its validity ever came from the White House. And so:

"God told me to strike at al-Qaida and I struck them, and then He instructed me to strike at Saddam, which I did, and now I am determined to solve the problem of the Middle East. If you help me, I will act, and if not, the elections will come and I will have to focus on them."

Bush did not claim, however, that he was acting under divine instruction in dealing with the Israel/Palestine conflict. Nor did he claim that God had already told him that He would be on his side in the upcoming elections.

And so, it happens that references to the "Supremacy of God" litter the speeches of the leaders of the Republican-Christian Alliance in the book, just as they litter the leadership of the 21st century Republican Party and its peripheral formations in reality. In the book's scenario the concept actually makes it into the Constitution (the "33rd Amendment," see chap. nine) and then helps to pave the way for their eventual formal declaration of the United States as a "Christian Nation" (a long-time goal of such Christian Right leaders as David Barton [30]). That "God is supreme" is a theory of government (theocracy, in one form or another) that the Christian Right has publicly subscribed to for quite some time now.

VII. An Increasing Focus on Homophobia

Homophobia and its political consequences are very important in the ideology and subsequent policies of the Republican-Christian Alliance of the book. First, as noted, in "2005" the Alliance puts into the Constitution (!) the notion that homosexual behavior is a matter of choice (chapter 7). In "2009", the President, under his emergency powers, declares homosexuality to be a crime (chapter 11). Finally, in "2020", with an active rebellion underway, the regime begins the "Second Final Solution," in which that "scourge upon society" on which all the people's troubles are blamed, are now to be arrested and sent to passive extermination camps (chapter 18).

.Back in the 1960s, school yearbook editors could read your thoughts.. And let's hear it for Pence and Conversion Therapy.
(Image by willconley777)   Details   DMCA

How far-fetched is this scenario? Well, at some time during the first two years of the G.W. Bush Administration, when Trent Lott was Senate Minority Leader, he said words to the effect that homosexuality is a sin and therefore evil, because the Bible says so. This man was the third-ranking leader of the Republican government at the time. A 2003 Bush nominee for the 11th Circuit Court of Appeals, the Attorney General of Alabama Bill Pryor, in a brief to the U.S. Supreme Court, at one time compared homosexuality with necrophilia, bestiality, incest and pedophilia. In April, 2003, Rick Santorum, when he was the third highest ranking Republican in the United States Senate, compared homosexuality to bigamy, polygamy, incest and adultery. Pres. Bush's response to this statement was that he (Bush) was tolerant of a range of views on social questions. That range apparently didn't include the view not held by Sen. Santorum that homosexuality, regardless of origin, is a perfectly legitimate lifestyle, protected by the Constitutional right to privacy (declared by the Supreme Court in "Griswold" to be found under the Ninth Amendment). More recently, former Wisconsin Rep. Mark Neumann allowed that "If I was elected God for a day homosexuality wouldn't be permitted" (31). Mr. Neumann was a Republican candidate for the Senate from his state in 2012.

Steven Jonas, MD, MPH, MS is a Professor Emeritus of Preventive Medicine at StonyBrookMedicine (NY) and author/co-author/editor/co-editor of over 35 books. In addition to his position on OpEdNews as a "Trusted Author," he is a Senior Editor, (more...)
Related Topic(s): Authoritarian Personality; Authoritarianism; Fascism; Fascist; Government; History; Ideology; Misogynism; Mormon; Partisan Religion; (more...) Party Platforms GOP RNC; Politics; Racism; Republican, Add Tags  (less...)
Add to My Group(s)
Go To Commenting
The views expressed herein are the sole responsibility of the author and do not necessarily reflect those of this website or its editors.