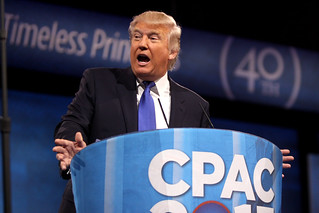 Now that Trump is the last man standing, the Republican party should start writing its 2016 obituary and autopsy. And the autopsy results should say "Death by Suicide." While establishment Republicans are scratching their heads about a Trump victory, those of us on the outside could easily see it coming. The Republican party sold its soul long ago, and this is the inevitable result.

Response to Obama's 2008 Election -- the First Nail in the Coffin

It all began when Mitch McConnell gathered his "forces" about him and proclaimed that the only goal of the Grand Old Party would be to make Obama a one-term president. To do this, they would have to open their doors to the likes of the Sarah Palins of the country -- those fringe elements that are racist, nativist, and who see the only solution to America's problems as dismantling the federal government. They played on these low-information voters' fears and stupidity and supported their candidacies until they won a majority in Congress. But the monster they created began to eat them up. They had to move to the right, taking positions that the majority in the country opposed and making promises that they could not keep.

Looking for a Savior -- The Second Nail

Nothing changed for the new "fringers" who brought the party so many votes in mid-term elections. They became angry. Obama got re-elected, their lives got no better, the evil "big government" stayed big, and even shutting down the government to try to rid the country of Obamacare was a defeat. Cruz was a hero but an ineffective one. They needed a savior that was stronger, tougher and who spoke their language. They needed someone to give them "real" solutions to the problem they faced -- a country being taken over by dangerous progressives and non-white aliens who weren't really Americans with the values upon which this country was founded -- you know, slavery, white Anglo-Saxon supremacy, religion and guns.

The thing about low-information voters is this: They keep thinking there is a savior out there. They just know that if they can get the "right" president in office, things will change. They know so little about the Constitution and about how decisions are really made in Washington, they really believe that a single man can "fix" what's wrong. Enter Donald Trump, a man who knows how to take advantage of this anger and rage and to use it to promote himself. He's a cunning, savvy man, who, like the "snake oil" salesman of the past, can play upon fears, find scapegoats, and make promises he knows he can't keep. And they still buy into it.

And where are the "responsible" establishment leaders of the party? Well, they are sitting on the sidelines, chewing their nails, and trying to figure out how they can at least save some down-ticket elections. This is what happens when you sell your soul. And it would make a great cause-and-effect essay topic for a student of political science.

The Appeal of Trump

Tell them what they want to hear. That's Trump's battle cry. And so it began with convincing speeches from a man who is a narcissistic showman above all else. He knows how to persuade his audience, that's for certain. Here are some of his now infamous words:

The Mexican government is somehow involved in illegal immigration and is sending murderers and rapists to our country.

All Muslim immigration must be banned, their mosques must be policed, and they must "register." And we need a religious test to get into this country.

Women who dislike him have "blood coming from somewhere."

Women who have abortions must be punished.

The Bible is his favorite book.

Kerry Creaswood is a young and ambitious writer from Savannah, GA. She is interested in self-development, design and marketing.

Related Topic(s): Party Machine Republican; Republican, Add Tags
Add to My Group(s)
Go To Commenting
The views expressed herein are the sole responsibility of the author and do not necessarily reflect those of this website or its editors.

Does a Degree Lead to Economic Mobility?

The Game of Nuclear Titans Leads to the Apocalyptic Threat