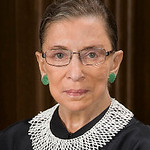 When I headed off to Rutgers Law School, I had a two-year-old, a giant book bag that doubled as a toy bag, and a trusty blue Volkswagen. I didn't really know any lawyers, and I sure didn't know any women who had gone to law school. I wasn't sure if I could pull this off.

Day by day, I got better, but I still wondered if I belonged. After a class one day, I was engaged in a vigorous discussion with the professor on a particular point, when he leaned back and laughed. He said I "reminded him of Ruthie."

It turned out that Ruthie Ginsburg had been teaching at my law school until just the year before. She and my professor were friends -- and he was clearly an admirer. He mentioned that she had gone to school with a child in tow. There was something very comforting about all this. Maybe I really could make it in law school -- and I would definitely watch out for this Ruthie.

I had a few chances to meet her, and yes, she was tough, smart and said just what she thought. And yes, I'm an admirer.

Have you watched Ruth Bader Ginsburg's confirmation hearing to the Supreme Court?

(If you haven't, consider that your homework.)

RBG's defense of reproductive rights before the Senate Judiciary Committee says it all. With the whole country watching, wondering whether the Senate would confirm such an incredible legal firecracker to the Court, her open and direct expertise left the men on that committee in the dust. It was breathtaking.

Before she was a Supreme Court Justice, Ruth Bader Ginsburg used the law to fight for women's rights. She worked for the ACLU and argued some of the most important cases on gender equality in our country's history.

Ruth Bader Ginsburg doesn't show up to work every day thinking about how she can bend the law to help giant corporations and powerful interests -- she helps defend fundamental, constitutional rights for everyone.

On August 3, 25 years ago, the U.S. Senate voted 96-3 to confirm Ruth Bader Ginsburg as a Supreme Court Justice. And I think that's reason to celebrate -- especially when our country's future depends on the Supreme Court right this minute.

Donald Trump's nomination of Brett Kavanaugh puts women's rights at stake like never before. As a judge, Kavanaugh has consistently advocated for positions that hurt women. He even opposed letting a young immigrant woman get prompt access to safe, legal abortion.

RBG is still in this fight -- and we have to be there too. We're not going back. Not now, not ever. I'm prepared to fight with every bone in my body for a Supreme Court that's fair, equal, and just for all.

Related Topic(s): Equality; Rights; Supreme Court Justice Ruth Bader Ginsburg, Add Tags
Add to My Group(s)
Go To Commenting
The views expressed herein are the sole responsibility of the author and do not necessarily reflect those of this website or its editors.