In the spring of 2020, events are changing so fast it is easy to be caught up in the action and unconscious of the context. For those of us who want a historic perspective, our best source is Naomi Wolf's book from 2007, The End of America. She summarized the content in this 2007 video, and here's her update from 2014. I've reproduced the full text here.

We've been watching in slow-motion the shut-down of American democracy. But historically, when open societies turn to authoritarian rule, the initial steps are numbingly incremental, then the prison gate closes too suddenly for the people to react. We may be witnessing that end stage this spring.

Wolf warned that it was already late in 2007. Is there anything we can do today? I am not without hope, because there are signs that the Powers that Be are not completely in control, that they are quarreling among themselves, and that events of this spring are not unfolding according to plan.

In retrospect, the election of President Obama in 2008 was a tragic turning point. He said all the right things in his campaign, and we wanted to give him a chance once he was in office. But now we can see that the people were sleeping while he transformed the anomalous excesses of the Bush Jr Administration into bipartisan consensus, the "new normal". His face was so kind and his voice was so intelligent that we failed to hold him to his word.

Before we knew it, Trump was in the White House and everything seemed so much further beyond our reach.

I've been most aware of the fact that elections are rigged electronically, and the DNC and RNC have conspired to make sure there's no one inspiring to vote for. I'm also keenly aware of media consolidation and internet censorship. The most important events are no longer being investigated or reported independently by any of our mainstream news sources, from Fox to NPR to the NYTimes to The Nation. They all present different editorials based on the same false narrative, and questions about the facts as reported are pushed to the margins.

But the creepy stories of torture and imprisonment without charge or arraignment are just as essential. The infrastructure has been prepared for a police state, and the procedures that have been used against "terrorists" last year will be used against you and me this year.

Wolf's message comes from studying the history of other transitions to despotism in the 20th Century: The rise to power of Hitler and Mussolini and Stalin. The echoes are chillingly familiar. Civil society seemed intact, then almost intact, then familiar enough that the people could recognize a kind of normality. Intellectuals expressed horror from their armchairs, while not doing anything that could upset the apple cart. The machinery of democracy and the courts of justice were slowly degraded, then dismantled over the years. The frogs didn't hop out of the pot as the temperature rose.

Then the lid snapped closed.

Here are the ten steps that Wolf outlines:

To illustrate all the ways that these things have come to pass in the last 20 years seems hardly necessary. But I'll dwell on the fate of Julian Assange, because it is for me the most powerful symbol of how far we have descended.

Assange was the light that continued to burn when the free press was going dark. He cast light on America's war crimes, on the DNC's rigged elections, on the surveillance state. Hillary Clinton was caught on video asking whether he couldn't just be murdered by drone. They didn't do that, but he was slowly smothered, first with a manipulation of the Swedish justice system, then with confinement in the Ecuadoran Embassy in London that slowly drained his sanity and his health. Then last year, with a $2 billion bribe and a right-wing coup, our CIA toppled the Ecuadoran government just so that we might have legal cover to remove Assange from their embassy into a high-security prison. For the last year, he has been held in solitary confinement without charge, starved, tortured, his powerful will and insightful mind neutered with powerful drugs. 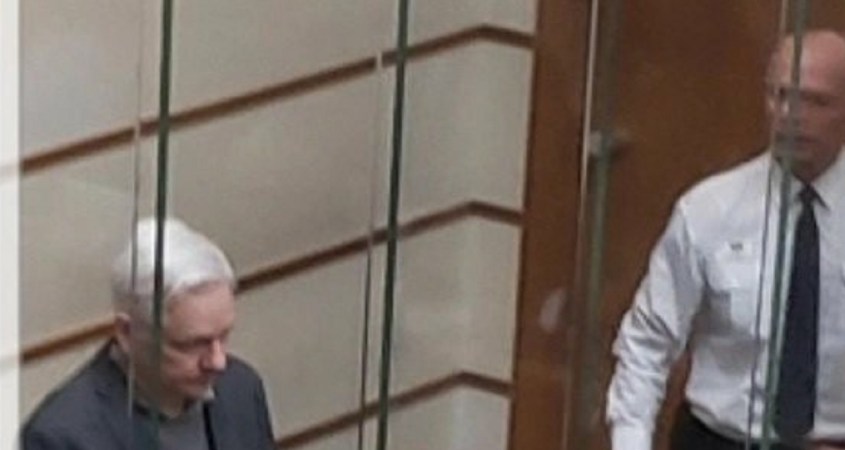 Journalist in a cage
(Image by Gray Zone)   Details   DMCA

Assange is a warning to journalists everywhere of what will happen to us if we report truthfully as the prison gate snaps closed.

Related Topic(s): Democracy, Add Tags
Add to My Group(s)
Go To Commenting
The views expressed herein are the sole responsibility of the author and do not necessarily reflect those of this website or its editors.