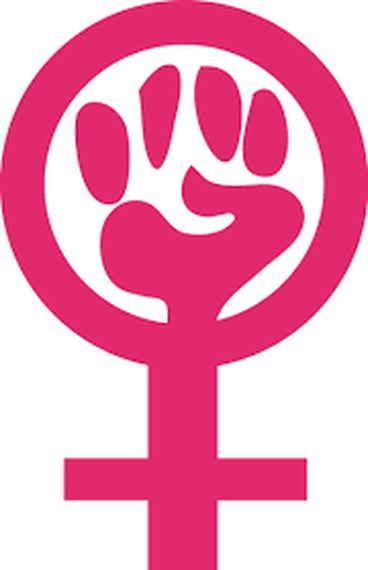 Feminism Symbol
(Image by Scholastic Empowering Luminary Females)   Details   DMCA
This year marks the 100th anniversary of American women winning their long and hard-fought battle for the right to vote. Against this backdrop, we have the current occupant of the White House trying to turn back time and put women back into that "suburban housewife" role that makes him feel more comfortable.

It seems as though women with any power or authority pose such a threat to Trump that he feels the need to go out of his way to ridicule and denigrate them. So it is not that difficult to imagine the type of campaign a man like him will ultimately wage against Joe Biden, the Democratic candidate for president, and his running mate.

In the next several days, Biden has said that he will announce his choice for his vice president, and has said that he will definitely be choosing a woman. This has led to much excitement and speculation, especially among Democratic women, who clearly might be eager for one of their own kind to actually win one of the top two spots this year.

Originally there appeared to be about 13 qualified women who were being considered for the job. When I made up my own list, I came up with seven strong contenders.

Everyone that I talked to has their favorite, and most of the time it turns out to be Senator Kamala Harris, probably the best known Black woman in politics today. She is experienced and is able to get things done. She also seems to appeal to voters across the board, from moderates to liberals.

Keisha Lance Bottoms is the Mayor of Atlanta, Georgia, and has been given much camera-time of late, due to the disastrous response to the Covid-19 Virus by the Governor of Georgia. The Mayor of Atlanta seems to be able to grasp the situation and come up with her own plans as city executive. Her leadership during this time was exemplary.

Val Demings is a well-known representative from Florida. She attracted my attention during the impeachment hearings. I appreciated the way she handled herself while questioning witnesses, not allowing them to fail to answer the question, which of course is sometimes a difficult task.

Probably the most experienced and the best known choice would be Susan Rice. She was U.S. National Security Adviser to President Barack Obama, as well as U.S. Ambassador to the United Nations. She, however, has never run as a candidate for public office, which is a different kind of challenge.

And then there is the Governor of New Mexico, Michelle Lujan Grisham, the only Latina who is being considered. She could bring to the ticket a special kind of diversity, which is very much needed in this day and age.

Tammy Duckworth is the well-known Senator from Illinois, who while serving as an Army helicopter pilot in Iraq, lost both of her legs. She comes from a military family and would be an asset to the ticket. I first wrote about her when she ran for the House of Representatives and lost her bid. I hoped that she would try again, and she did, and now she is a United States Senator, who would make an excellent vice president.

And rounding out my list is the Governor of Michigan, Gretchen Whitmer, who had to contend with armed terrorists in the state capital building where she worked, who were being encouraged to cause "bad trouble" by Trump himself. She stood her ground when it came to Covid-19 precautions and regulations, and was thereby labeled a "strong woman," which for some reason terrifies Trump.

All of these women are politically gifted and have the intelligence and experience to help lead our country out of the quagmire that it has been thrown into. But above those basic qualifications, and just maybe because of their gender, they bring to the job at this critical time in our history the ability to empathize with the citizens of our country in a way that is clearly lacking by the leaders on every level of the G.O.P. I have listened to all of these women being interviewed on MSNBC News over the last two weeks or so, and they clearly have what it takes to step up and do an excellent job if they are chosen for this important job.

Joe Biden has been interviewing the candidates that he believes would be the best fit for him as a partner to lead our country back to greatness. We need someone who will help Biden return America to its rightful place among world leaders. Being the laughing stock of the Western World is not a good place to be. And allowing the POTUS to cow tow to Putin or any other dictator is nothing but a humiliation.

The person who is chosen to be vice president will have the great honor of helping to restore and preserve democracy in our country. And she will also need to ensure that all the damage that has been done to the progress that women have made over the last 50 years but has been chipped away by the Trump Administration, will be put right again. I think that any one of these women would make a great vice president, and one will.

Related Topic(s): 2020 Elections; Army; Choice; Democracy; Democratic Candidate Electability In 2020; Democratic National Convention; Experience; Iraq; Military; Msnbc; (more...) Putin; Trump; Women, Add Tags  (less...)
Add to My Group(s)
Go To Commenting
The views expressed herein are the sole responsibility of the author and do not necessarily reflect those of this website or its editors.