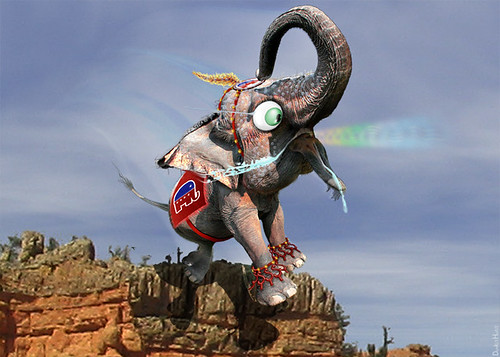 Thom Hartmann's July 4th question whether our democratic-republican form of government is dying is one of, if not the most, important question Americans confront today. His question deserves an answer, one that spells out clearly and without doubt, why America is experiencing a crisis of belief in its ideas, values and principles. The answer requires casting a large net over many seemingly unrelated political issues to even begin clarifying our situation.

Since Donald Trump's inaugural hardly a day goes by when some aspect of the American political tradition is not assaulted preventing immigrants from entering our borders, declaring the free press as "the enemy of the people, refusing to allow audio or video recordings at White House Press Conferences so no one can dispute the word of the president, an obsession with leakers, even a personal criticism of a federal judge who ruled against him.

Virtually all the people in his administration and in the dominant Republican party have remained silent about these provocations. Almost no one has disagreed publicly with the president's assault on Science and not just climate change. Trump appears to be denying the government's duty to conduct basic scientific research by his refusal to appoint roughly 80% of the vacancies in scientific personnel within his administration.

The list of these assaults is complex and seemingly endless: nominating Secretaries of Education and Housing without one day's experience on the job; a Secretary of Energy devoted to destroying the regulation of that industry; a head of the Environmental Protection Agency who believes climate change is a hoax. Add to this the president's lies (roughly four every week) and misstatements about elementary aspects of American history (Andrew Jackson's crucial impact on the Civil War comes to mind) and one wonders how long our constitutional democracy can function.

Yet as long as the nation's media focusses on 'Trump's Tweets' and ignores the dominant political party acting solely as a faction with no objective other than increasing its power --the public can never understand what is happening. An assault is being made on basic procedures which protect our democratic constitutional-political system in state and national legislatures. And we are diverted by the furor surrounding the president's communications.

A clear example of this process is the Health Care Bill now before the Congress. The bill's avowed purpose is to replace Obamacare with a Republican party version that will leave approximately 18 to 23 million citizens without coverage according to the Congressional Budget Office. Indeed many health organizations and professional critics agree with that estimate.

The Republican's determination to destroy Obamacare has its origins in a decision by that party to prevent the then new President from accomplishing any legislation. Period. The then minority leader, Mitch McConnell, personally filibustered almost 500 times to prevent legislation from being voted on in the senate. When one ponders that one legislator's actions over an eight year period it reveals a fanatical opposition to the one idea that makes our entire political system function: i.e. compromise.

If you succeed in destroying every bill a president submits before it comes to a vote you never have to compromise. And if you bring government to a halt via polarization then nothing can be accomplished. This was the strategy of the Republican Party for eight years that produced dividends for them.

Before Trump took office the US government was criticized as suffering from "paralysis" due to Obama's lack of leadership. Budgets were delayed passing, almost nothing was done to reverse inequality, many states gerrymandered their election districts unfairly and under Citizen's United money became the decisive factor when nominating candidates in primary battles but also in election results. Congress and the courts interpreted the constitution so it benefitted the few at the expense of the many. Permanently.

Where the health of the nation was involved something else appeared that Americans had never seen before: a manufactured hatred of a bill that benefitted tens of millions of citizens. Throughout the presidential campaign of 2016 the Republican candidates and especially Donald Trump claimed without any evidence whatsoever that Obamacare was destroying health care in America and bankrupting our efforts to have a more efficient system.

It was all undefined and undocumented rhetoric but it became part of a litany in the campaign speeches of virtually every Republican candidate over a year long period. Constant repetition in the media that was uncritical added to the belief that it was true.

The result was when Trump became president he claimed a supposed mandate to replace Obamacare with something, anything, that could be called a "new plan." Speaker Ryan, one of Obamacare' sharpest critics, announced his priority to destroy it. His bill, however had so many contradictions within it they could not be explained. Further the bill had no open committee hearings and few legislators even knew what it contained. And this is a bill that would affect tens of millions of Americans.

When the Speaker tried to bring his bill to a vote a large number of the anti-democratic maneuvers were revealed. Few Republicans had even read the bill and almost no Democrats were going to vote for it. Resistance against the Ryan version of the Health Bill was so great he had to withdraw the bill to enormous embarrassment. He had not even waited for the Congressional Budget Office to "score" the bill and determine what it would cost the government. This maneuver exposed the hypocrisy of the Republicans who claimed financial integrity was their reason for killing Obamacare. Henceforth the senate would take the lead and then a combined House-Senate "compromise" version would be presented to the President who would surely sign it.

Within weeks senate Republicans orchestrated another fiasco based on antidemocratic strategies. No hearings on the bill were held by the majority (which meant 48 Democrats could not ask questions or present contrary evidence about the Republican version.) No experts could be called to testify against the bill and set the record straight. Thirteen Republican senators out of 100 senators wrote the total bill for the entire nation in secret.

Nothing was said about the consequences of this new health bill. The CBO struggled to come up with a figure between 18 and 23 million people that would be affected but Republicans attempted to divert the discussion. Even the president tweeted the CBO had been wrong in the past so we could ignore their estimate. Trump did nothing to clarify the "debate" and refused to answer questions.

Author of The American Revolution of 1800. Recently retired academic who has taught courses in politics, history, revolution, terrorism and technology in 11 colleges and universities in the West from Alaska to California over the last 50 years.
Related Topic(s): Trumpcare; Tyranny, Add Tags
Add to My Group(s)
Go To Commenting
The views expressed herein are the sole responsibility of the author and do not necessarily reflect those of this website or its editors.

The Health Care Bill: A Study In Tyranny