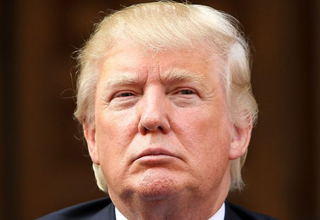 Trump is finished, he is toast -- as many of us predicted, he never had a chance to be president. He's a one-trick pony, and the theatrics that won him first place in the circus that is the Republican primary are about as useful as a third nostril in the general election. But there are so many obvious reasons for his inevitable implosion that it would overcrowd this page to even mention them here. He's now down to a 12.5 percent chance of winning, by Nate Silver's estimate at FiveThirtyEight.

Just a few weeks ago, Michael Moore was among those who said that Trump would win. But Moore got the important things right -- the anthropology and social psychology of Trump supporters, for example, and most importantly the direction of change at the present moment:

"Don't get me wrong. I have great hope for the country I live in. Things are better. The left has won the cultural wars. Gays and lesbians can get married. A majority of Americans now take the liberal position on just about every polling question posed to them: Equal pay for women -- check. Abortion should be legal -- check. Stronger environmental laws -- check. More gun control -- check. Legalize marijuana -- check. A huge shift has taken place -- just ask the socialist who won 22 states this year."

He could have added much more on the economic front: inequality has become a major political issue for the first time since probably the 1930s. Perhaps most importantly: the Federal Reserve, which pretty much determines the level of unemployment in the United States and had for decades felt free to ignore its legal mandate to pursue full employment, now finds itself under unprecedented political pressure not to throw people out of work by raising interest rates.

Real social movements such as Black Lives Matter and Fight for $15 have risen up and forced the mass media and politicians to take their demands seriously.

Amidst all the morbid fascination with Trump it is easy to miss that the historic significance of this presidential race has been, and remains, Bernie Sanders' Democratic primary campaign. Even on the left, there are many who see Trump as a harbinger of a dark era in front of us. Of course his appeal to racism and anti-immigrant sentiment has been ugly and menacing.

But this is not 1968, when a right-wing backlash against the civil rights, anti-war, and other movements elected Richard Nixon and set the stage for a rightward drift that would continue for decades. Or 1980, when Ronald Reagan succeeded in institutionalizing and accelerating this right-wing political offensive, thus changing the world, including the Democratic Party, so much that the Bill Clinton presidency would build on his legacy.

By contrast, in 2016 we have witnessed Hillary Clinton adopting most of the program of her defeated opponent, including opposition to the Trans-Pacific Partnership Agreement (TPP) -- an abomination that has the most broad and fervid support imaginable among this country's most powerful corporate and "national security" elite.

That is the real indicator of the direction in which the country is going, and Trump's brief "strutting and fretting his hour upon the stage," as Shakespeare wrote, will have no lasting impact. By contrast, Sanders has announced the formation of Our Revolution, which plans to continue organizing around the issues that he raised in his presidential campaign, as well as recruit political candidates "from school board to the US Senate." In another promising move launched with the help of high-level staffers from Sanders' campaign, the group Brand New Congress plans to recruit, fund-raise, and help elect a new crop of candidates for the House of Representatives in 2018, organized around a progressive political agenda.

This will be the legacy of the 2016 presidential race, long after Trump has taken his "very nice, long vacation."

This article originally appeared on The Hill.

Related Topic(s): 2016; Bernie Sanders; Donald Trump; Legacy, Add Tags
Add to My Group(s)
Go To Commenting
The views expressed herein are the sole responsibility of the author and do not necessarily reflect those of this website or its editors.