Reprinted from dailykos.com by Crashing Vor 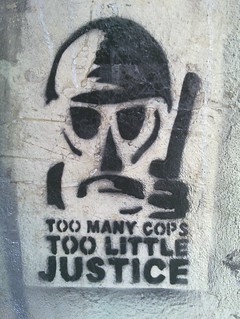 
When I was much younger, there was a sticker, commonly seen sharing bumpers with the sentiment "America, Love It or Leave It," which read, "If You Don't Like Cops, Next Time You're in Trouble, Call a Hippie."

Actually, not the worst advice, as I've seen many tense situations defused by the calm words of nonviolence advocates, but there is a truth worth contemplating in that intended insult: society needs police. Despite the best intentions of educated, fair-minded citizens, sh*t, as they say, sometimes gets real. Much more often when such citizens are in scarce supply.

Even in the absence of malice, people often make bad assumptions, pull jack moves, try to defy Newton or otherwise gum up the works. And, from the time we gathered 'round the fire in caves, society has found it useful to appoint hall monitors whose authority is accepted by all to resolve disputes, offer assistance to the injured or aggrieved and quickly quarantine dickheads. "You kids settle down back there or I'll turn this society right around and go home! Is that what you want?"

Such authorities, like the governments described by Mr. Jefferson, derive their just powers from the consent of the governed, and that consent is offered in exchange for two perceived attributes: capability and fairness.

Related Topic(s): Police Brutality; Police State, Add Tags
Add to My Group(s)
Go To Commenting
The views expressed herein are the sole responsibility of the author and do not necessarily reflect those of this website or its editors.