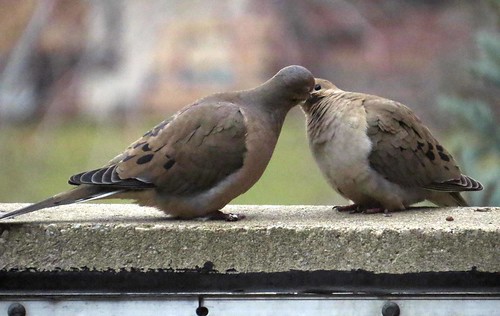 Let me tell you about the birds and the bees.
(Image by kennethkonica)   Details   DMCA

I often marvel at the incredible capacity that the United States populous has to lie to itself; 'tis truly fascinating. As far as I can discern, it is a psycho-social phenomenon unparalleled in human history (maybe with the exception of Nazi Deutschland). The rampant use of mind/mood altering substances and other addictions such as social-media and technology tend to exacerbate the problem. It has been documented by scientists that the average so-called American has an attention span south of that of a goldfish. In terms of global intelligence quotient rankings, the United States is not even in the top twenty (20); these facts explain much. Despite its notions and self-intoxication (quite literally) that it is an evolving society, the United States is, at the very best, a revolving society. Most likely, it is a devolving one.

Wikipedia defines "The birds and the bees" as an English-language idiomatic expression and euphemism that refers to courtship and sexual intercourse. The "Birds and the Bees talk" (sometimes known simply as "The Talk") is generally the event in most children's lives in which the parents explain what sexual relationships are. However, talk is cheep.

This is the most fun I have had writing a column in quite some time.

United States President Donald Trump has altered the political landscape in the United States in ways that are both obvious and immeasurable. He has reconstructed the courts for decades to come. Trump has literally shifted the paradigm of politics with such extreme violence that the language itself of politicians has been permanently altered. The White House has always been host to foul-mouthed, unfaithful, racist, sexist bastards, but their vulgarities were rarely displayed or uttered in public. Trump has changed all of that. He regularly uses foul language in public and, now, other politicians are doing the same exact thing. Whether it's "Hell yes, we are going to take your AR-15" or "we are going to impeach the motherf*cker" politicians now utter profane oaths publicly in a manner which would have been unacceptable a mere four years ago. Trump actually has democrats longing for John McCain. Trump has the democrats referencing war criminal George Bush (either one) as a "statesman". Donald Trump has the democrats assigning accolades to Mitt Romney as a paragon of decency and moral virtue as Trump is so vulgar, so gross, so ignorant and so embarrassing that anyone else is preferable. One would be surprised at how the appetite changes after many days without food; things considered revolting to eat just a few days prior suddenly become foie gras. I will retard my compulsion to state that Trump is a reflection of their society; they simply do not like what they see in the mirror and would rather lie to themselves that he, is not thee.

Any democrat, in the current incredibly weak field, that stands a Snowball's (and I do mean Snowball) chance in hell of getting the democrat party nomination will be the equivalent of something between Mitt Romney and Donald Trump politically. The problem for the democrats is that their fragmented base will not solidify behind a Trump-Lite candidate at a level that will overthrow the Trump regime. I mentioned months ago, when Joe Biden announced his candidacy, that he had better "run as a republican in drag". Now comes the inevitable democrat party meltdown.

The Iowa caucuses were held over a week ago and there is still no definitive winner, but I think most people know who won. It will probably be the same person that wins the New Hampshire primary but that person is antithetical to the corporate/establishment democrat's model. In fact the aforementioned candidate so disturbs them that they, as a party, have become cannibalistic in that they are willing to harm themselves to suppress him. They did a similar thing last general election; failing to realize that they are not only out of sync with their base they are repulsing much of it. Ergo, the democrats will nominate either the Birds or the Bees and that will be their death knell.

Political correctness is not my strong suit much to my, albeit subjective, credit. The fact of the matter is that women and girls have always been likened to birds; even women refer to each other as "chicks". Germanic legend, and modern parlance, refers to a "beautiful maiden" as a "swan". When I was a teenager in Los Angeles in the late seventies boys called girls "birds" and it was a term of great admiration, however silly.

Given the corner that the democrats have painted themselves in, they will nominate one of the three birds in the race: Amy or Lizzy (not sure if Tulsi is still in there). Now, in actuality, they will not nominate a woman to go up against Trump (unless Michelle Obama or Clinton show up). That just isn't going to happen; stop lying to yourself. I mentioned the birds to make a point, keep reading.

The bees are all boys and are: Biden, Bloomberg and Buttigieg (and you thought the BBB was the Better Business Bureau). I will employ the same discipline I did earlier and retard my compulsion to comment on so many of the candidates for the democrats shamelessly referencing their Black Buddy Barack (BBB).

Biden, Bloomberg and Buttigieg, the bees, are milquetoast democrats just as the birds are. Lest we not forget that Snow White, Native American Lizzy Warren was once a staunch republican and has been a democrat for less than 20 years. Amy Klobuchar is clearly republican-lite in both policy and temperament. Bee Bloomberg was re-elected as republican mayor of New York less than 15 years ago when he was older than I am now. I will refrain from any commentary on Buttigieg as anyone that knows me can guess my thoughts on him, and I have already commented on Biden. In essence, none of these folks will vanquish Trump, they will not. Absent some unforseen and unmitigated domestic or international disaster, there is only one person that will present a real challenge to Trump. Ironically, that is the person that the democrat party establishment will, absolutely, sabotage. Just as it did in 2016. Thus their B.S.