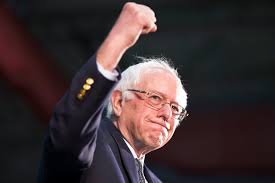 While Bernie Sanders was doing a brilliant job of ripping into the Trans-Pacific Partnership during the live-streamed launch of the Our Revolution organization on Wednesday night, CNN was airing a phone interview with Hillary Clinton and MSNBC was interviewing Donald Trump's campaign manager.

That sums up the contrast between the enduring value of the Bernie campaign and the corporate media's fixation on the political establishment. Fortunately, Our Revolution won't depend on mainline media. That said, the group's debut foreshadowed not only great potential but also real pitfalls.

Even the best election campaigns aren't really "movements." Ideally, campaigns strengthen movements and vice versa. As Bernie has often pointed out, essential changes don't come from Congress simply because of who has been elected; those changes depend on strong grassroots pressure for the long haul.

It's all to the good that Our Revolution is encouraging progressives around the country to plan far ahead for effective electoral races, whether for school board, city council, state legislature or Congress. Too many progressives have treated election campaigns as impulse items, like candy bars in a checkout line.

Opportunities await for campaigns that might be well-funded much as Bernie's presidential race was funded, from many small online donations. But except for presidential races, the politics of elections are overwhelmingly local -- and therein lies a hazard for Our Revolution.

A unified set of positions nationwide can be helpful; likewise publicity and fundraising for candidates across state borders. But sometimes hidden in plain sight is a basic fact: National support does not win local elections. Local grassroots support does.

Backing from Our Revolution will be close to worthless unless people are deeply engaged with long-term activism in local communities -- building relationships, actively supporting a wide range of sustained progressive efforts, developing the basis for an election campaign that (win or lose on Election Day) will strengthen movements.

Sooner or later, some kind of culture clash is likely to emerge when social-change activists get involved in a serious election campaign. Running for office involves priorities that diverge from some tendencies of movement activism (as I learned when running for Congress four years ago). The urgencies and practicalities of election campaigns aren't always compatible with how grassroots progressive groups tend to function.

As a 501c4 organization, Our Revolution won't be running campaigns. Instead, it'll raise funds and provide support for campaigns while being legally prohibited from "coordinating" with them. And -- most imminently with the urgent need to stop the TPP in Congress during the lame-duck session -- Our Revolution could make a big difference in pressuring lawmakers on key issues.

Overall, the live-streaming debut of Our Revolution continued a terrific legacy from the Bernie campaign of educating and agitating with vital progressive positions on such crucial matters as economic justice, institutional racism, climate change, Wall Street, corporate trade deals and health care.

But throughout Our Revolution's live-stream, war went unmentioned. So did Pentagon spending. So did corporate profiteering from the massive U.S. military budget.

In that sense, the evening was a step backward for Bernie. After virtually ignoring foreign policy and military-related issues during his campaign's early months last summer, he gradually criticized Hillary Clinton's record of supporting regime change. In early spring, during the New York primary campaign, he laudably called for evenhanded policies toward Israel and Palestinians. Although he never delivered more than occasional and brief glancing blows at the military-industrial complex during the campaign, Bernie did offer some valuable critiques of foreign policy.

But from the debut of Our Revolution, including Bernie's 49-minute speech, you wouldn't have a clue that the United States is completing its 15th year of continuous warfare, with no end in sight.

Now, sadly, there may be a need to reactivate the petition headlined "Bernie Sanders, Speak Up: Militarism and Corporate Power Are Fueling Each Other," which 25,000 people signed on a RootsAction webpage 12 months ago:

Related Topic(s): Bernie Sanders; Donations; Issues; Revolution, Add Tags
Add to My Group(s)
Go To Commenting
The views expressed herein are the sole responsibility of the author and do not necessarily reflect those of this website or its editors.