My wife and I recently saw a new play entitled "The City of Conversation," at the Lincoln Center Theatre in New York City. The play is centered on the adult life of a once-famous "Washington Hostess," a power-broker of sorts for whom there were several real-life models. In the days before the Reagan/Gingrich/Tea Party GOP, when there was true give-and-take between the Democrats and Republicans, on some level at least, these women played an important role in bringing leading members of both parties together for informal negotiations, out of the public eye. The brilliance of the play is that it intertwines public and personal lives, the political and the emotional, and how they interact, in this particular telling leading to no good outcomes on the latter side. Historically, in three acts, it is set in 1979, 1987 and 2009. But it does reach back to the Kennedy/Johnson/Nixon era as well.

This column is not a review. It is rather a collection of some of the remembrances that I had during the play, which covers the period of my adult political life. Some are related directly to the substance of the play; many are not, but the play brought them up into my consciousness. And so let me share some of them with you.

There was President Kennedy's little-remembered "American University" speech of June, 1963. In it he essentially proposed taking Soviet Premier Nikita Khrushchev up on his earlier proposal to try "Peaceful Co-existence" as the basis for relations between the US and the USSR. With that speech, perhaps even more than with his not-too-well hidden intent to withdraw US forces from Viet Nam after the 1964, JFK signed his own death warrant.

Many of us who fought hard against the War on Viet Nam from the beginning of the escalation (I was marching in 1965 when people would come up on the street and ask "what's the Viet Nam War?"), wondered just why it was that LBJ gave up on the Great Society, only to get sucked into the "Big Muddy." Had he not, he would have gone down in US history as one of the greatest Presidents of all time. Only recently did a Johnson tape come to light in which he offered his prime reason: He was afraid that if he didn't escalate, the Republicans would call him a "commie." And we are still living with the droppings of the Era of McCarthyism.

Just before the 1968 election, the Democratic candidate, Sen. Hubert Humphrey wanted to declare that he would end the Vietnam War right after election, just as Dwight D. Eisenhower had done with the Korean War. For reasons that have never been clear, the by-then totally lame-duck Johnson told him, "No!" and for equally unclear reasons Humphrey listened to him. In the meantime, the GOP candidate Richard Nixon was secretly negotiating with the right-wing South Viet Namese government which Johnson was trying to steer towards a settlement at the "Paris Peace Talks" to scuttle these talks (which they did). Johnson knew about the treason but decided to do nothing with the information.

Sen. George McGovern's 1972 Democratic candidacy, featuring the slogan "Bring America Home," was doomed from the start when the right-wing Democratic establishment, the predecessors of the Democratic Leadership Council, led by Washington State's Henry "Scoop" Jackson, the "Senator from Boeing," refused to support him. McGovern was portrayed by Nixon as a weak-kneed, lily-livered liberal. Not once did George McGovern, whom I later came to know (he wrote the Foreword to my first political book, The New Americanism) ever mention that during World War II, when Nixon had a nice desk job in the US Navy, McGovern, was flying 35 missions (volunteering for an extra 10 over the required 25) piloting one of the "flying coffins" (because it was so difficult to escape from when hit by enemy fire) B-24 bombers. George, who had survived the famous Second Ploesti Raid (Romanian oil fields, vital to the Nazi war effort), didn't have a chance. 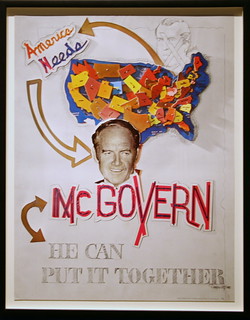 America Needed George McGovern, the Fighting Pilot of World War II: He Could have Put It Together, if Given the Chance
(Image by cliff1066™)   Details   DMCA

On Nixon, I recall that when in 1972 I saw the first article in the New York Times about the Watergate break-in (front page, but a single column, "below the fold"), at which time there was not the least hint that Nixon had anything to do with it, having known of "Tricky Dick" as he used to be called, since he ran his first red-baiting campaign against the unsuspecting California Congressman Jerry Voorhis in 1946. I said to myself, "Nixon's behind this one."

Ronald Reagan, counseled by the famous political consultant Lee Atwater brought racism into the mainstream of Republican politics. In March, 1980, he symbolically opened his Presidential primary campaign in the tiny town of Philadelphia, MS. It just happened to be the site of the murder of the three civil rights workers during the "Freedom Summer" of 1964 (one of whom, Andy Goodman, I had known a bit at high school).

Reagan also was the first to make abortion rights a political issue. Starting down that track from the beginning, he made the resignations of George and Barbara Bush from their long-time Board memberships with Texas Planned Parenthood a condition of giving the Vice-Presidential nomination to Bush. On energy policy, one of Reagan's first acts as President was to shut down, on January 21, 1981, the Federally-funded alternative energy research program that President Carter had started, as well as ordering the removal of the solar panels that the former president installed on the roof of the White House. The Global Warming Denial Movement is a direct descendant of the Reagan Presidency. Just imagine where this country could have been in the alternative energy technology movement had that program stayed in place. But Big Oil was as much behind Reagan as it is behind the present whole of the GOP/TP.

And oh yes, in the 1980 election Reagan's victory was called a "Landslide." Actually, he got 50% of the vote, Jimmy Carter got 43% and a third party candidate (for whom I had worked), former Congressman John Anderson, got 7%.

On "Iran-Contra," during his Presidency Reagan broke the law by supporting the right-wing rebels in Nicaragua, such support being specifically prohibited by an Act of Congress. (He also broke the law by secretly dealing with the Iranian "terrorists," with whom, during the 1980 Presidential Campaign, much like Nixon he committed treason by bargaining with them not to release the US Embassy hostages until after the Presidential election, thus making sure that Carter would continue to be saddled with the continuing crisis.) "Iran-Contra" eventually got to a joint Congressional Committee. Ted Kennedy and other liberals were kept off the Committee by Indiana Congressman Lee Hamilton, the Democratic fixer for the GOP, who would in the future play a similar role on the "9/11 Commission." It is interesting to note that current Democratic "fixer," Cong. Steney Hoyer, has arranged to keep such liberal lights as Cong. Alan Grayson off the newly minted House "Benghazi" (Benghazi, Benghazi, Benghazi) Committee. Hamilton also arranged for Col. Oliver North, who was at the center of the Iran-Contra plot, to be given Congressional immunity. Otherwise, he would have been forced to take the Fifth, which likely would have rightly led to Reagan's impeachment.

The appearance of two gay men in the third act of the play (2009) made me think back to the first AIDS Crisis, which broke about in the middle of the Reagan Presidency. Reagan, so strongly indebted politically as he was to the "Revs." Jerry Falwell and Pat Robertson, who had immediately labelled AIDS as, "God's punishment for the sins of homosexuality," of course Reagan had known many gays during his days in Hollywood, including the "Male Archetype" Rock Hudson, who happened to have been one of the early victims of the dread disease, couldn't bring himself to mention the word (AIDS) for more than two years after it had been coined.

Finally, you might ask, why so many negative memories and so many that feature Republicans and Ronald Reagan. Only because it is the Republicans, and the policies with which they have been running our country, whether in the majority in Washington or not, and gradually running it into the ground, for the bulk of my adult life. And, it was Ronald Reagan, the "failed B-movie actor," as he is described by the leading liberal at the beginning of the play, who set the pattern on so many levels for what the Republican Party and our nation have become today.

Yes indeed, Sean, "What would Reagan do?" One only has to look at the record.

Steven Jonas, MD, MPH, MS is a Professor Emeritus of Preventive Medicine at StonyBrookMedicine (NY) and author/co-author/editor/co-editor of over 35 books. In addition to his position on OpEdNews as a "Trusted Author," he is a Senior Editor, (more...)
Related Topic(s): Democratic; Hate-Racism-Bigotry; History; People; Policy; Politics; President, Add Tags
Add to My Group(s)
Go To Commenting
The views expressed herein are the sole responsibility of the author and do not necessarily reflect those of this website or its editors.