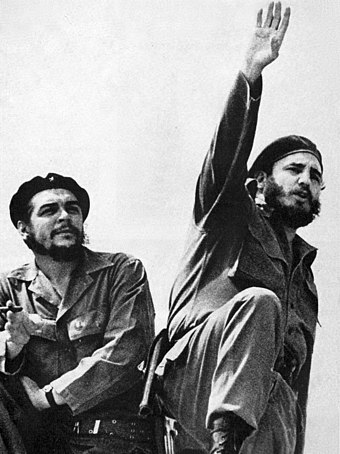 Che y Fidel. This is how it all started.
(Image by Wikipedia (commons.wikimedia.org), Author: Alberto Korda)   Details   Source   DMCA

Almost from the time the Russian Revolution began, on November 7, 1917 (new calendar), one or more Western Imperial powers waged war against it. Sometimes the war was military, as in the United Kingdom-led Intervention (under Winston Churchill) that began in 1918, and the Nazi's Operation Barbarossa that began in 1941. More often it was economic and political. I have described it as "The Seventy-five Years War Against the Soviet Union," for it was waged to a successful conclusion, for Western Imperialism, with the breakup of the Soviet Union in 1992. Indeed, a major element of Western/mainly-U.S./led foreign, and at times military, policy since the time of the Russia Revolution has been to attempt to prevent the peaceful development of one form or another of socialism in any country in which it made its appearance.

Which brings us to Cuba. The "Fidel-led" Cuban Revolution which successfully took over the nation on January 1, 1959, was seen as an especial threat by the United States. It has had major socialist elements in its economy and political structure since it was established. It did away with the domination of its economy by a small group of local capitalists and landowners, allied with gambling and criminal elements from the United States. From early on it was setting an example for the rest of Latin America as to what might be accomplished by a socialist revolution of one sort or another. And so, on one level or another, with one set of tactics and strategy or another, from the time of the "Bay of Pigs" invasion to now (with a brief relaxation of the campaign under President Obama [see below]), allied with reactionary elements from, and to some extent in, Cuba, the battle has been ongoing.

The full details of the current unrest/protests in Cuba are unclear, and likely never will be. Certainly, U.S. policy, both direct and indirect has much to do with the current situation, which is occurring in the context of the COVID-19 pandemic. At all levels, from the basic function of the economy, to trade, to living standards, to the availability of goods and services, since its founding Cuba and it people have suffered at the hands of the U.S. While it existed, the Soviet Union provided major assistance to Cuba (to say nothing of making sure that the threatened major U.S. invasion of 1962 was prevented). But of course, that aid ended with the collapse of the Soviet Union.

Certainly, there is genuine anger directed at the government because of the current economic situation, again in the context of the pandemic. But the reports of what has been going on in terms of street protests, and counter-demonstrations in support of the government, has been as least somewhat distorted by, for example, reporting that used images of demonstrations which did not take place in Cuba but elsewhere, at different times(!) So the full picture is not known, and likely will not be for quite some time.

At the same time, especially since the fall of the Soviet Union, for the most part U.S. policy has continued to have been aimed at making life in Cuba as difficult as possible, with the continued hope that doing so would lead in one way or another to the overthrow of the nominally Communist government. Under Trump, of course (gotta get the Cubo-Gusano-Miami vote, ya know) the sanctions against Cuba had become particularly onerous. It is highly ironic, and deadly, that while Cuba has been able to develop its own vaccine, and inject it into the arms of over 2 million of its citizens (out of a population of 11 million-plus), because of the sanctions, the government had trouble obtaining the syringes and needles needed for the injections. But so far, at least, the socialist government has remained in place.

But supposing, just supposing, that sometime during this "62 Years War" it had met with success, and the Cuban government had been overthrown. Supposing Senators Cruz and Rubio and etc. had been able to impose their will upon Cuba and its people, re-installing private ownership of vast tracts of land and private ownership of the industrial means of production, and private control of trade, and so on and so forth. Well, a few years ago I considered that possibility, that would create a state that I characterized as "Cruzbio's Cuba." Following a visit to Cuba in 2016, during the modest thaw in relations that had been introduced by President Obama, I wrote a column that described that alternate reality. Here, with some slight editing, are major elements of that column. They certainly reflect what Cuba would look like if the current Communist government were replaced.

Cruzbio's Cuba: What it Would Look Like
On July 1, 2015, President Obama announced the re-establishment of full diplomatic relations with Cuba. The process has followed a carefully developed time-line. The President himself described the US policy that has been followed since 1962 as:

"A Failed Approach: Decades of U.S. isolation of Cuba have failed to accomplish our objective of empowering Cubans to build an open and democratic country. (sic) At times, longstanding U.S. policy towards Cuba has isolated the United States from regional and international partners, constrained our ability to influence outcomes throughout the Western Hemisphere, and impaired the use of the full range of tools available to the United States to promote positive change in Cuba. Though this policy has been rooted in the best of intentions, it has had little effect - today, as in 1961, Cuba is governed by the Castros and the Communist party.

"We cannot keep doing the same thing and expect a different result. It does not serve America's interests, or [those of] the Cuban people, to try to push Cuba toward collapse. We know from hard-learned experience that it is better to encourage and support reform than to impose policies that will render a country a failed state. We should not allow U.S. sanctions to add to the burden of Cuban citizens we seek to help."

Of course, the U.S. economic embargo of Cuba, which has been in place since the early 1960s and was significantly strengthened under Bill Clinton (!), had done much to hold back the normal development of Cuba. It is the product of Congressional legislation, and the Republican Congress has made it clear that there will be no change in that policy as long as it remains in charge of it. The objective of the embargo (and non-recognition as well), has always been stated by the U.S. supporters of it to be the "empowering [of] Cubans to build an open and democratic country." (These open policies have also been accompanied by on an ongoing secret campaign against the government of Cuba by the CIA and presumably other U.S. government, and perhaps non-government, agencies, to overthrow the Cuban government. [As of 2016] this campaign had included a total of over 600 documented assassination attempts on Fidel Castro alone, which is about one a month on the average since the U.S. broke off relations at about the time of the Bay of Pigs attempted invasion in 1961.) The primary objective has of course been the prevention of the peaceful development of socialism in a country, following some sort of anti-capitalist/anti-colonial revolution.

Every 2016 Republican candidate for the Presidency has strongly criticized the President's policy. Out in front on this one have been Senators Marco Rubio and Ted Cruz. Presumably what Cruz and Rubio want is a return to the 55-year old campaign to build "to build an open and democratic country." The two Senators never fail to point to their status as children of Cuban refugees as giving them special qualifications to take the positions that they do. Neither, however, also points out the neither of their parents actually fled Cuba after the triumph of the Revolution in 1959. Cruz' father actually escaped the Batista dictatorship in 1957 and Rubio's parents fled it under the same dictatorship in 1956. Be that as it may, both Senators presumably would like to have a Cuba that looks as much like the United States as possible, you know, "open and Democratic."

Steven Jonas, MD, MPH, MS is a Professor Emeritus of Preventive Medicine at StonyBrookMedicine (NY) and author/co-author/editor/co-editor of over 35 books. In addition to his position on OpEdNews as a "Trusted Author," he is a Senior Editor, (more...)
Related Topic(s): Cuban Doctors; Cuban Embargo; Cuban Embargo Lifted; Cuban Health Care; Cuban Missile Crisis; Cuban_doctors_around_the_world; Revolution; The Cuban Revolution; The_illegal_and_immoral_blockade_of_cuba; Trump Attacks Cuba, Add Tags
Add to My Group(s)
Go To Commenting
The views expressed herein are the sole responsibility of the author and do not necessarily reflect those of this website or its editors.