Former Secretary of State John Kerry asserted that "human values are universal values" on Wednesday. He spoke of the need for the United States to engage in the world rather than retreat, to commit to long-term plans, and to exhibit good governance.

He speaks from a record that includes diplomatic breakthroughs with Cuba and Iran, and a priority on our threatened oceans. And he appeared to speak to Secretary of State Rex Tillerson, who shocked an auditorium of State Department employees earlier that day by saying the United States should sometimes "separate values such as freedom, human dignity, and 'the way people are treated' from foreign policy." Perhaps this was a poor attempted justification to the major cuts to the Department of State and international institutions? 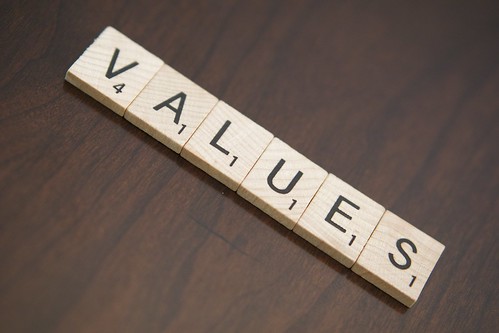 Regardless, we must fight to define, preserve and advance core underlying American values.

The huge disconnect between what's been proposed by the administration -- whether in tax reform, health care, the environment and climate -- and core values that represent caring for our population, with a commitment to their rights and dignity. This must be highlighted deftly.

Values can't just be dismissed. They ground all organizations. The consulting firm McKinsey's famous 7S model places "shared values" at the heart of an organization: its structure, strategy, system, style, skills, and staff all reflect them.

This administration recognizes that few of its actions pass the "values test." Thus they've created a flurry of activity, bouncing like toddler with ADD from topic to topic, aiming to keep the public from examining their policy initiatives.

That's why Donald Trump has his "forbidden love" -- single-payer health care -- grounded in, as he said, universality, a higher quality of life, taking care of others, and affordability. (A friends-first approach of getting better acquainted and advancing its worthy cause would make sense.)

Recent White House statements have changed tone. They've spoken against discrimination and for a resolution to the Israeli-Palestine crisis. But it is far too early to see if this represents a commitment to action, even in these limited areas.

Veena Trehan is a DC-based journalist and activist. She has written for NPR, Reuters, Bloomberg News, and local papers.
Related Topic(s): America; Budget; Caring; Environment; Health Care Universal - Single Payer; Republican Budget; Strategy, Add Tags
Add to My Group(s)
Go To Commenting
The views expressed herein are the sole responsibility of the author and do not necessarily reflect those of this website or its editors.