Republished from Center for Economic and Policy Research (CEPR) 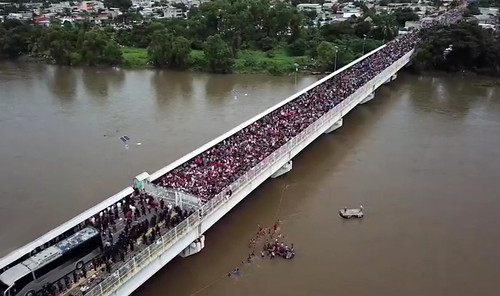 Donald Trump won the presidencydespite losing the popular vote by 2.8 millionwith a campaign that careened wildly from one distraction to another. He has clung to this as a Twitter and governing strategy ever since. As there are 190 countries in the world, and the United States trades with most of them, trade wars so far have provided a shovel-ready supply of such diversions. So, here we are: Last Thursday, just in time to distract from the more potentially violent foreign ventures that are not going very well (Iran, Venezuela), Trump announced plans for a new set of tariffs against Mexico.

This trade war is different from other trade wars: It's not about trade. It's not even about "trade" in the expanded, grossly misleading but commonly used definition that includes the intellectual property and investors' "rights" that Trump is fighting for against China. It's just Trump telling Mexico that they must stop the flow of migrants across our southern border or he will impose a 5 percent tariff beginning June 10 and increasing to 25 percent by October.

Unsurprisingly, this strategy has met with an unusual level of resistance from Republicans in Congress, as well as from other allies with deep pockets and money to lose if the war escalates, such as the U.S. Chamber of Commerce and Business Roundtable. Late Tuesday, after the president told Republicans that they would be "foolish" to try to stop him, The New York Timesreported that Republican senators have warned the White House they could "muster an overwhelming majority to beat back the tariffs." So it's not clear yet whether this plan will actually take effect.

Still, it's worth looking at the underlying reality of the "border crisis" that Trump has labelled a "national emergency" and which the tariffs purport to addressas well as how tariffs would actually affect that reality.

The most up-to-date measure that we have of migrants crossing the border between the U.S. and Mexico without authorization is the Custom and Border Protection's "apprehensions/inadmissibles." Over the past five years (fiscal years 2014 to 2018) this number has actually fallen, with 2017 apprehensions hitting nearly half-century lows. In 2018, apprehensions/inadmissibles went up, but were still well below the level of 2014. The number of unauthorized Southwestern border crossings, meanwhile, for any of these years (between 416,000 and 569,000) is just a fraction of the 1.6 million that crossed the border from Mexico in 2000.

Contrary to Trump's repeated histrionics, which tend to encourage the racist fears and animosities of an important part of his political base, the only surge in southwestern border migration has been for the last three months (February to April), with an average of 96,500, versus 60,500 for the prior three months. Three months is not nearly enough to establish that there is a change in the long-term trend. The three-month surge has not been well-explained, and could be temporary. Some reasons offered by researchers: some is seasonal, due to spring weather; some is due to lowered transport costs, in particular the fees charged by "coyotes"smugglers who specialize in bringing migrants to the U.S.particularly for families with children; some is paradoxically due to Trump's threats and hostility, leading some potential migrants to fear that it's "now or never."

If we investigate the reasons for the non-crisis flow of migrants from the south, and specifically the so-called Northern Triangle countries and Mexico, where these migrants come from, it turns out that much of it is due to the damage caused by U.S. foreign policy. In 2009, President Mel Zelaya of Honduras, a social democrat who had overseen some social and economic progress since taking office in 2006, was overthrown by the military in a coup that was consolidated with help from the United States. Hillary Clinton, who was secretary of state at the time, wrote in her memoirs that she worked successfully to prevent the democratically elected president from returning to office.

In the years following the 2009 coup, Honduras became the most dangerous country in the world for environmental and human rights activists. In 2016 this was brought to world attention when Berta Caceres, a renowned indigenous rights and environmental activist, and winner of the Goldman environmental prize, was assassinated. In 2017 Honduran President Juan Orlando Herna'ndez, whose party won an election of questionable legitimacy following the 2009 coup, was "re-elected" with a vote count that was transparently fraudulent.

U.S. involvement in Guatemala has been much more violent, all the way back to the CIA-led overthrow of another social democratic president, Jacobo Ãrbenz Guzma'n, in 1954. Over the following decades, a succession of U.S.-backed dictatorships would kill more than 200,000 people, more than 80 percent of whom were Mayan Indians, in a long series of horrific atrocities that the U.N. would later find to be genocide. President Bill Clinton apologized in 1999 for the U.S. role in the genocide, which involved considerable material and political support from the United States.

In El Salvador, the U.S. provided funds, training and support to governments and military forces linked to death squads that murdered tens of thousands of civilians from 1978 to 1992. In the early 1980s, El Salvador was the third largest recipient of U.S. aid in the world, after Israel and Egypt.

Is it any wonder that these three countries continue to have the highest homicide rates in the world, given these histories of violence? Or that they would provide over half of the migrants seeking to cross the Southwestern border of the U.S.? In the Salvadoran case, this has turned into a vicious feedback loop. Some of the young men who migrated to the U.S. in the 1980s and '90s following the civil war ended up in gangs (MS-13 and Barrio 18) in Los Angeles, but were forced to return home when President Clinton let their Temporary Protected Status expire. Two of the gangs they formed with their U.S. and Salvadoran-acquired skills are now the largest employers in the country, as they extort millions of people and contribute to the country's widespread violence, triggering new migration flows in turn.

Washington's nefarious War on Drugs, meanwhile, remains a cesspit of violence and U.S.-sponsored militarization that brings misery to those countries unfortunate enough to be located between the Colombian and Pervuian cocaine producers and U.S. consumers. If trafficking is reduced through U.S.-sponsored state violence in Mexico, it just contributes to more of both in Central America. A careful econometric study recently found that violence is about as important as long-term economic factors in explaining the number of unaccompanied children from Central America showing up at the United States' southwestern border.

U.S. intervention that generates violence isn't the only way that our government has boosted the supply of migrants from the south. Beginning in the 1980s, the U.S. and institutions that it controlsin particular the IMFwere involved in re-making Mexican economic policy and institutions with a set of neoliberal reforms. One of the main effects, and indeed purposes, of instituting the North American Free Trade Agreement (NAFTA) in 1994 was to lock these policies into an international treaty. Unfortunately, these economic policies have been a terrible failure for Mexico.

If Mexico had grown at the same rate post-1980 as it did in the two decades before, Mexicans would have European living standards today, and few Mexicans or Central American migrants who arrived in Mexico would have much interest in trying to enter the United States. From 1960 to 1980, income per person in Mexico nearly doubled. From 1980 to 2000, however, it grew by a total of just 13 percent. Today, the national poverty rate is higher than it was when NAFTA was passed. As with the cases of Guatemala, Honduras, and El Salvador, it's worth remembering that countries' economic growth rates and stability cannot be attributed to just one cause. Still, it's interesting to think about how many fewer migrants might be headed toward the U.S. border if Washington had simply refrained from intervening in these countries.

Related Topic(s): Border Cruelty, Add Tags
Add to My Group(s)
Go To Commenting
The views expressed herein are the sole responsibility of the author and do not necessarily reflect those of this website or its editors.