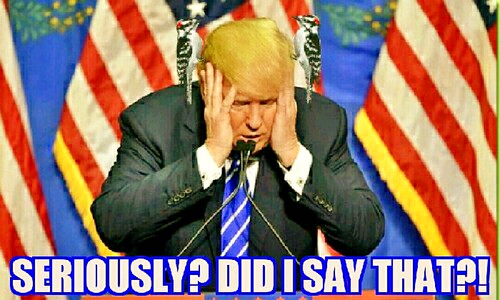 About your serially sexually assaulting women? Ooops! Yes you did. Right on that .Billy Bush. tape.
(Image by IoSonoUnaFotoCamera)   Details   DMCA

On May 7, 2020, Ms. Tara Reade called upon the former Vice-President Joe Biden to withdraw from the Presidential race. This request/demand is based solely upon her charge that in 1993 he sexually assaulted her by pushing "her up against the wall in a Senate hallway and penetrat[ing] her digitally." Ms. Reade has retained an attorney, although it is unclear at this time what the purpose of the retention is. Mr. Wigdor, that attorney, at least as of May 7, 2020, declined to provide any details on that matter, other than referring to "public relations."

The former Vice-President has vehemently denied the charge. There are several matters to consider here. First of all, it is hardly clear that Biden is a rapist or any other kind of sexual assaulter/harasser. Ms. Reade's description of what she says happened has changed over time. She did decline to appear on Andrea Mitchell's MSNBC show on May 4th and also declined to appear on Fox News on May 3, even though Biden had gotten a rather tough going over by Mika Brzezinski on MSNBC on May 1. Ms. Reade appeared in a recorded interview with the former Fox News host Megyn Kelly on May 7. There are questions that have been raised about the purported incident, such as to whom she reported it and when. In terms of the MeToo Movement, my position is that not every woman who makes a charge of sexual assault is to be believed. BUT, every charge of sexual assault/harassment should be thoroughly investigated, as independently as possible (although that is not always possible).

Of course, right at the outset the Trumpublicans© were comparing how the Democrats were responding to these charges with the way they responded to the charges against Judge Kavanaugh when his appointment to the Supreme Court was being considered by the Senate. Right at the outset it has to be pointed out A) that Judge Kavanaugh's accuser, Dr. Christine Blaisey-Ford testified that the Judge had sexually assaulted her, UNDER OATH. Thus, at least so far, there is no comparison to be made between her charges and the way they were made and those of Ms. Reade and the way they are being made (although Ms. Reade has said that she would testify under oath). It should also be pointed out that no full investigation of Judge Kavanaugh and the charges laid against him were ever carried out. The White House and the "Justice" Dept. made sure of that. Finally, it should also be pointed out that no charge of perjury has ever brought against Dr. Blaisey-Ford.

But, that non-comparability aside, certainly the charge laid against the former Vice-President should be fully investigated (but by what body and how I have absolutely no idea). One note on the investigation of V-P Biden, one has already been started, by himself. He requested that the Senate records be searched for any charges made against him at the time by Ms. Reade that would presumably have been lodged there. But guess what? Surprise, surprise. The Senate Majority Leader has refused to allow access to any Senate records on the matter, saying they are "confidential" (which of course would also apply to Biden, because any record would be about him too, and he simply asked that they be searched for). Given what we know (and know, and know) about the hyper-political McConnell, there is only one conclusion to draw on that one. McConnell's staff (the present Secretary of the Senate was a member of it) has already looked for any evidence and either found no record of any complaint or found something that exonerates Biden of a sexual assault allegation. (Certainly, another sort of complaint, concerning, let us say, the work atmosphere and relations, might have been lodged at the time.)

Finally, since this charge by a single individual has only been brought up at the time of the Presidential campaign, and the Vice-President is the presumptive Democratic nominee, any investigation of him can only be done in the context of a similar investigation of the charges against the sitting President that have been made by at least 25 women (including at least one charge of rape). And let us recall that Trump has boasted on tape that he regularly sexually assaulted women. At least to date, there has never been another charge of sexual assault made against the Vice-President. It may or may not be relevant that according to reports on sexual assault, as for example on campus, very few if any sex assaulters have done it only one time.

As to the demand that has been made about having access to the Vice-President's "Delaware papers" (which are not supposed to be released until two years after the Vice-President leaves public service) of course if that were to occur similar access to the personal papers of the President would have to be made, regardless of any Non-Disclosure Agreements that might lie among them. What's good for the goose is good the gander, and much more importantly, this is politics we are talking about, not sexual harassment in the abstract where only one side has the responsibility to investigate.

We are coming up to the most significant election in U.S. history (and yes, I am aware of the elections of 1860, 1864, and 1932). If Trump wins, we are facing a fascist future. And so, investigate the V-P just as long as the charges brought by at least 25 women against the other major party Presidential candidate (who, to repeat, has boasted publicly of harassing women sexually) are also investigated with, of course, access to all of his personal papers, starting with his income tax records which can tell us much about such matters as pay-offs in such matters. It's the charges against Trump, not those against Kavanaugh, that are comparable. So that is where the whole matter should commence.

Steven Jonas, MD, MPH, MS is a Professor Emeritus of Preventive Medicine at StonyBrookMedicine (NY) and author/co-author/editor/co-editor of over 35 books. In addition to his position on OpEdNews as a "Trusted Author," he is a Senior Editor, (more...)
Related Topic(s): Evidence; Harassment; McConnell-Mitch; Metoo; Perjury; President; Senate; Sex; Sexual Abuse; Sexual Assault; (more...) Sexual Harassment; Sexual Misconduct; Tara Reade; Trump; Women, Add Tags  (less...)
Add to My Group(s)
Go To Commenting
The views expressed herein are the sole responsibility of the author and do not necessarily reflect those of this website or its editors.